As it snows, yet again, here in NYC, I got another return from ST. Today's mail comes from Phoenix, AZ, home of the Oakland A's ST. Former Yankees catcher and current A's Manager Bob Geren signed 2 cards and a Yankee Stadium custom card. This was my second time sending a request to him. He didn't respond last year. Nice to be able to add him to the Yankees collection.

Still looking into seeing if I can upload pics here from my cell. If anyone knows, can you please tell me if it's possible and how?

Thanks.
Posted by Yankeejetsfan at 2:05 PM No comments:

Still another day without a laptop. I gotta look into seeing if I can upload pics to this blog from my blackberry. That would help alot.

Today bought me a return from Billy Sample, who played one year with the Yankees. He signed a 1986 Topps card and a Yankee Stadium custom card in blue ink. He also took the time to write a short letter thanking me for the letter and he was proud to be a part of my collection and wished me luck with it. He also asked if we were getting more snow and said enough already, lol. He lives in the same area as I do. I love the small touches like that. To me, it shows the athletes are very apprecitive of the fans and that means a lot to me.

I also got an RTS from Paul Blair, but it had his forwarding address on it so I just popped it into another envleope and mailed it right back out. Well see how long that takes to come back.
Posted by Yankeejetsfan at 2:40 PM No comments:

I haven't been able to post here because my laptop is about to be given it's last rites. I'm posting this from my work computer. I can't really save pics on it, so until I'm able to buy a new laptop, I will just post what I have gotten and post pics later. I have gotten in recently:

Chad Moehler-Signed a Topps 08 and a Yankee Stadium custom. This was sent to Orioles ST and returned in under a week

Johnny Bower-This puzzled me as he usually signs and returns in under a weeks time, but it took 2 months. I was worried as I hoped his health was ok. He's a great signer and a terrific ambassador to hockey. He signed a Maple Leafs puck in silver paint pen and added HOF inscription. He also signed my custon card and added a signed post card of him holding the Stanley Cup. It was also postmarked from FL rather than Canada.

Kevin Weekes-Signed 2 customs, a Devils puck and a 08-09 UD Series 2 card in about 2 months. This was sent to him c/o Hockey Night In Canada.

Brian Dayett-Former Yankee Outfielder signed a 1982 Donruss and a Yankee Stadium custom in about a week.

jon Lieber-Signed 2 Topps cards and a Yankee Stadium custom in about 2 weeks time sent in care of his home. This was a third times a charm one as I had sent to him 2x before in care of the Phillies and never got them back.

That's all for now. Hopefully I can get my laptop replaced rather quickly so I can post pics here again.
Posted by Yankeejetsfan at 2:01 PM No comments:

ok, I tried to post last night, but for some reason it wasn't sticking. Let's try this again 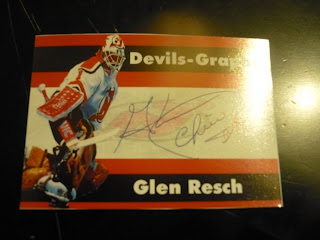 Glen "Chico" Resch. Former goalie for the Islanders, Rockies, Devils and Flyers. Signed 2 customs in pen. I did send a third, which he didn't sign. I'll try to get him at the Rock later in the year. 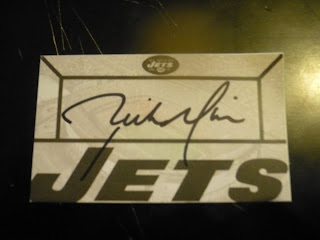 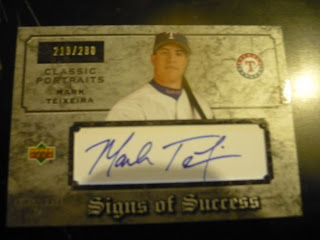 This was an ebay win for the Mark Teixeira 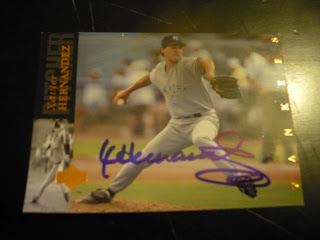 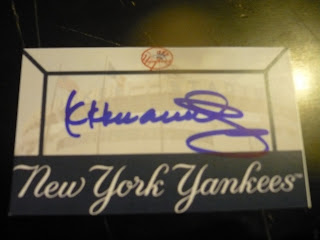 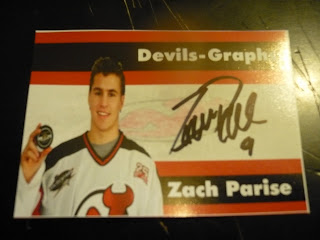 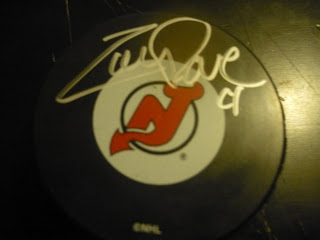 Devils Forward and one of the NHL's best young stars Zach Parise signed 2 customs in black and this puck in silver sharpie in 7 days. 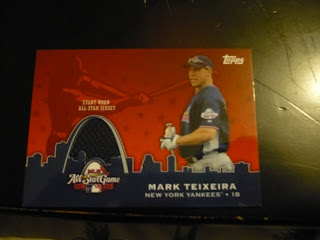 No TTM's. Just this ebay win for my Teixeira PC arrived. I'm also bidding on a 50 card lot as well.

Time for bed. I pray this saves this time.

Posted by Yankeejetsfan at 12:01 AM 2 comments: