Recent Adds to the Jets Collection

I was recently able to add some new cards to the Jets PC. I have actually been ignore it for a while and while I was looking through the collection, I noticed I was missing a lot of players I've wanted in the PC.

I went on ebay, placed some bids, winning one and made a deal with a football card collector on sportscardforum.com.

Here are the new additions 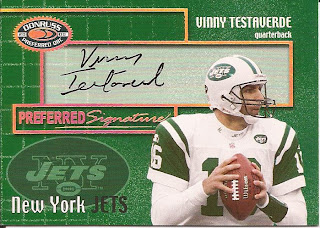 I have been wanting a Vinny Testeverde auto for sometime now and I was happy to be able to add this card. Testeverde is one of my all time favorite Jets and Now I can cross him off the want list. 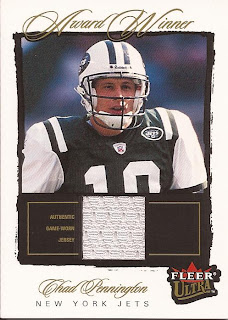 I used to collect Chad Pennington. This card will be a welcome addtion to the PC 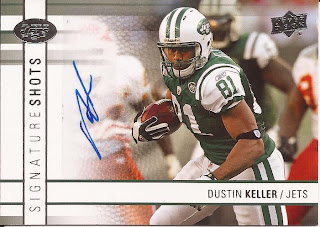 For some reason each time I participate in a group break, I always seem to pull a Dustin Keller game used card, but never an autograph. With this ebay purchase, I was able to rectify that and cross Keller off the want list. 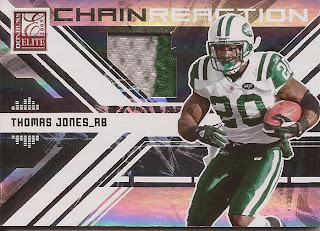 This is a nice one for the PC. I love to collect the patch cards and this one has a piece of patch, as you can see. 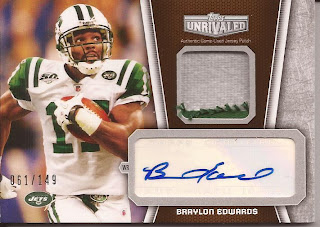 This card covers my love for patches and autos. It was a must have as I don't know if Edwards will be a Jet this season. He's a free agent and although his drops have considerably, well, dropped, I think Santonio Holmes is a must sign. Glad to add Edwards to the Jets auto PC with his beauty. 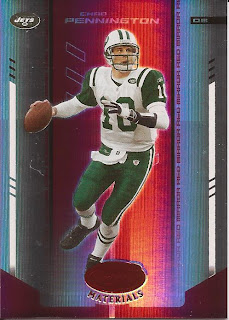 The trader threw in this Leaf Certified Red card. Nice add to the collection.

I have another card coming in off ebay soon. Hopefully, it will arrive today.

I was glad I could add to the Jets collection, especially since I have been working on organizing the Jets base cards I have. Will probably add more in the upcoming weeks, so stay tuned.

It's frustrating. I haven't wrote a blog with the exception of the Rex Ryan one because of this.

Anyone know how this can be fixed?
Posted by Yankeejetsfan at 9:35 AM No comments:

Last week, I attended the Rex Ryan Book signing at the Jets Store in Manhattan. Over 200 Jets fans attended the signing. I managed to be about the 70th person on the line, having gone straight from work.

3 of the Flight Crew, which is the Jets Cheerleading squad also showed up to greet the fans and sign autographs while you stood on line. 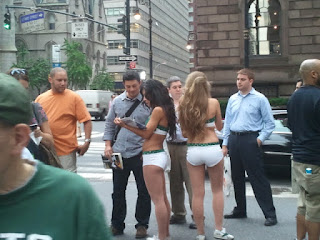 The store has a wide range of merchandise for the Jets fan in your life. Here's my personal favorite, jerseys. 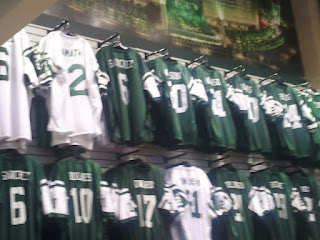 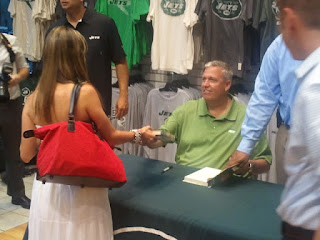 And once you got inside, you were greeted by the man himself, Coach Ryan. He was extremely nice. I got to thank him for the tremendous job he and his staff has done in the 2 years he's been coach and I couldn't wait till he bought home a Super Bowl Title. He seemed genuinely thankful by that remark and told me it was fans like me that he's busting his tail to bring it home.

Here's the swag I bought home: 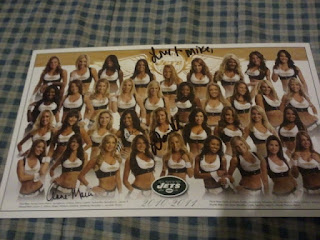 Signed photo by three of the flight crew. 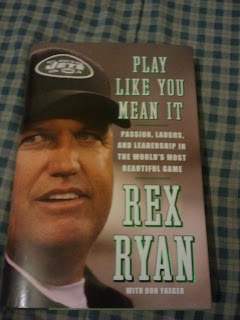 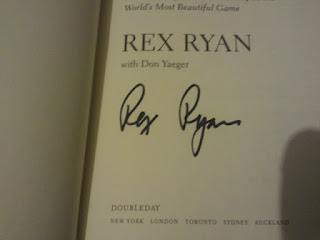 Inside of book, signed by Coach Ryan.

It was a fun day to be a Jets fan.
Posted by Yankeejetsfan at 3:17 PM 4 comments: 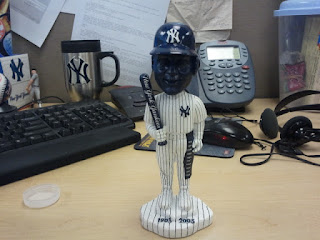 Yesterday, the mailman bought me my newest pick up. This is a 2003 All Star Game bobblehead, painted in Yankee colors and theme. The base of the bobble has the years the Yankees has been in existance. 2003 was the Yankees 100th anniversary and this bobble proudly displays that. 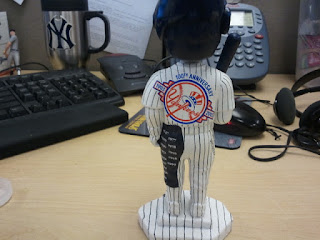 All in all, it's a very nice bobblehead. I have seen these go for upwards of 75.00 on ebay. Thankfully, I paid nowhere near that. This bobble is one of the more simplier of the set that came out, where as the paint and logos are kept to a minimum. I have seen ones from other teams were the colors and logos are all over the place. But I like the simplicity of this one and I'm glad I'm able to add it to the collection. 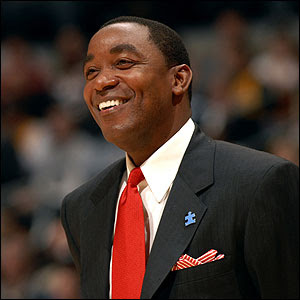 An open letter to one James Dolan, owner of the New York Knicks:

I have been a New York Knicks fan since 1981. In that time, I have seen a lot of people come and a lot of people go. from Hubie Brown to Mike D'Antoni. To Michael Ray Richardson to Carmello Anthony. Bernard King, Rick Pitino, Mark Jackson, Lenny Wilkens John Starks, Pat Reily, Chris Duhon, Stephon Marbury, Patrick Ewing, A'mre Stoutmire, I have seen a lot of player and coaches call Madison Square Garden home.

I have stuck with this team when Bernard King went down with what was at the time called a career ending injury. I watched the Knicks upset the Pistons in the 1983 playoffa before losing to the Celtics. I seen the joy on Dave DeBusschere's face when the Knicks won the number one pick in the 1984 NBA draft, which turned into Patrick Ewing. I seen Ewing lead the Knicks to the NBA Finals, only to lose to Hakeen Olajowon and the Houston Rockets. I have seen the Knicks become the first 8th seed to make the NBA finals, losing to the San Antonio Spurs. I have followed and stuck with this team through the good times and the bad. I have never not wanted to see anyone person return to the Knicks. Heck, I have wondered why Ewing is not coaching the Knicks in some capacity or Mark Jackson as the Head Coach.

There is, I must confess, one person I do NOT want to see return to the Knicks and his name is Isiah Thomas. Here in NY, we refer to Thomas's regin as the Dark Age. This man, single handedly, brought the Knicks to their worst period in their history. He bought in Stephon Marbury, Tim Thomas, Nazir Mohammed, Jerome James, Michael Sweetney and Eddy Curry., at the cost of a first round pick and said getting Curry was like getting a first rounder. Seriously. He fired Lenny Wilkens when Wilkens was making chicken salad out of chicken (censored). He didnt even give Larry Brown a chance to do something with this team. He let Don Cheany coach way too long and then there was that whole Anucha Browne Sanders mess. He gave away money like it was water to players who had no business making the type of money they were making, putting the Knicks in salary cap hell for years thanks to the contracts of Curry, Jamal Crawford, Malik and Jalen Rose, and Steve Francis. Not too mention the wonderful trades for Penny Hardaway, Jerome Williams and Maurice Taylor. As much as he should be complemented for drafting David Lee, I still want to know what in the name of Red Holzman was he thinking drafting Renaldo Balkman. The mere thought of Thomas coming back to be the General Manager of this team just sickens me. How could James Dolan even think about it, after the hell he put the Knicks through. Does he not remember the nightly "Fire Isaih" chants that rang through out the Garden? Does Thomas have picture of Dolan that Dolan doesnt want made public?

Look, I know this hasn't happened and if Dolan is smart, and no one can ever confuse of of that, it will not happen. But, just the mere fact that Thomas is still a New York Knicks consultant, as long as Dolan continues to call Thomas a friend, the threat is always there.

I do not want to see Thomas's smiling mug on t.v. re-intorducing himself to New York fans. I don't want to see him come in and destroy all the hard work that Donnie Walsh has done in his time here. If Dolan decides he must have Thomas back (which is like Leon Hess deciding he must have Rich Kotie coach the Jets), then he will lose a few Knicks fans, including me. I have gone through enough mocking from fans of other teams. I have gone through too much dissapointment ( I am a Jets fan after all) to have to endure Isaih and his garbage once again. If Dolan brings him back, then maybe he deserves Thomas to come in like the wrecking ball that he is.

But don't ask me to watch it, because I wont. Choice is yours Mr. Dolan.
Posted by Yankeejetsfan at 3:12 PM No comments: