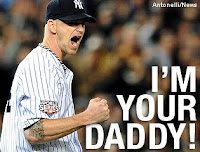 Game 2 goes to NY. Great pitching dual yesterday. I dispise him, but I have to give the devil his due, Pedro pitched a hell of a ballgame yesterday and was certainly good enough to win. AJ pitched terrific as well, attacking batters, getting a lot of first pitch strikes and pitching quick innings. Where the heck was this the regular season though? oh well, if he helps the Yankees to a world championship, all will be forgiven. At least he was healthy all year long. My boy Tex came out of his slump nicely and Godzilla roared as well. Game three should be a good one with Hammels against Pettitte. Hopefully it won't be a football score at Citizen's Bank on Saturday.
Got an ebay win yesterday, 2009-10 Upper Deck Eddy Curry auto. Needed it for my Knicks PC. If only he'd drop some weight and gets back on the floor. Last time I saw him, he looked like Mamma from Mamma's Family. He had the neck butt going which is never a good sign for a guy that young. You start to think about his health first, playing ball second. Anyway, Knicks are in Charlotte to play the equally bad Bobcats. Here's hoping we can come to the Garden tomorrow night with a win.
Hopefully, I can get some pics of my recent adds this weekend. Let's Go Yankees!
Posted by Yankeejetsfan at 8:57 AM No comments: 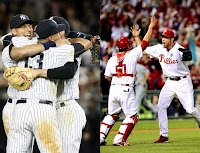 GAME ON!!!! Tonight, weather permitting, will be game one of the 2009 World Series. CC Sabathia against Cliff Lee. Their best pitcher against our best pitcher. A line up that hits for power vs a line up that hits for power. People, this could very well be one of the better World Series in years. This was the series I was hoping for. A battle of the best teams in baseball. My prediction: Yankees in 6. Both have powerful lineups. Both teams have the ability to come from behind to win games. Both have a tremendous home field advantage. I feel the Yankees have better starting pitching and a better bull pen and that will make the diffrence in this series. May the best team win.

I got a package today that had my Yankee cards from a group break of 2009 Topps Chrome. Amoung the highlights was 2 Ramiero Pena autographs and a Mark Melocen auto. Also a Blue Refractor Robinson Cano. The guy also added Meilky Cabrrea Bowman's Best auto, my second Meilky auto. I'll try posting pics tonight during the game. If the game gets grained out, I have the Knicks season opener and the Devils/Sabers game to watch.

Enjoy the game everyone. Let's Go Yankees!
Posted by Yankeejetsfan at 2:10 PM No comments:

Well, I haven't been recieving any TTm's. In a bit of a dry spell right now. I did go to Duane Reede during my lunch break to print out the customs I made over the course of the past few days. Hopefully, they came out well and I'll get them sent out tomorrow. I have to write up some letters tonight when I get in from my appointment at a perspective school. Then I have a group break also tonight with one of my Hockey groups. Hopefully I can get a Broduer pulled for the PC.

Tomorrow promises to be a great day. Yankees/Phillies World Series Game 1, Knicks season opener and the Devils skate off against the Sabers at the Rock. The Devils are selling signed pucks for charity for 25.00 bucks a pop. The first time they did this last season, it was a mad house. They're was no restrictions on how many pucks you could purchase, so there were people paying a couple of hundred to try and get a Brodeur or Stevens or Parise auto'ed puck. Alot of people got shut out and boy, were they mad. I read on the Devils message board I belong to, www.njdevs.com, that a bunch of people were storming mad. I didn't get shut out though. After waiting in line all afternoon for tix and being one of the first at the door, my paitence netted me a....Johnny Oduya auto. Not bad, I did need him for my small collection of Devils signed pucks, but not the one I wanted. I'll be parked in my apt, watching Game 1 and the Knicks season opener, but had the Yankees not made the series, I would have been in Newark.

Hopefully, something will come in this week. If not, I'll post some of my collection to past the time. Untill next time, LET'S GO YANKEES!!
Posted by Yankeejetsfan at 2:07 PM No comments:

Made a few decisions today. I need to dedicate more time to this blog. It could be a fantastic blog showing off my collection and what I get to add to it, plus how I come across it and a new way to make friends. Between work and trying to get back into school, I have had the chance until now to update. That's gonna change. I was reading up on some other blogs and saw how great they were and decided to focus more on this blog. So, on days I don't get anything, I'll still update with thoughts about my teams, and just updates on my life.

I got into a discussion with my buddy Mark, who is also an autograph collector and he was trying to encourage me to think outside the box when it comes to my collection. He suggested I try to get other players as well. I just don't see the point of doing so, unless they are HOF'ers or players I admire. I'm going to need the room to display my pieces and honestly, I probably wouldn't enjoy an auto of a guy like Rance Mullinicks as opposed to Wayne Tollison. Tollison played for the Yankees and that's one of the teams I collect. If I knew a friend that would enjoy the auto or if he had a Mcfarlane, then I would consider it. One thing I do want to do is expand into the world of entertaiment. I'm a huge comic guy, who loves Spiderman and Batman. I sent off a poster of Amazing Fantasy #15 to Stan Lee and in a few months it was returned, signed in black on the bottom. It's one of my more prized posessions. I also wanted to start a muti signed Dark Knight Poster piece and sent off to Aaron Ekhardt in Febuary, but still haven't recieved it back. I may want to pick up another poster and just send to the two I know who do sign, Christan Bale and Michael Caine.

Anyway, I will post more often and hopefully pick up some readers along the way and make some new friends.

Take care and Go Yankees!
Posted by Yankeejetsfan at 11:51 AM No comments: