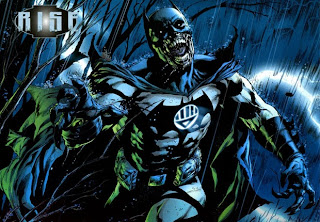 I've been without internet for a week and in that time I have been going through blogging withdrawal. Thankfully, I have my internet back and I can get back to what I love to do and it's not watching dogs talk on YouTube (although that is also pretty cool).

So, since I've been back home, I have yet to review the goodies I was able to score while I was in California. So today, I will start off with the Funko Pop Vinyl Blackest Night Batman I picked up from Hot Topic in West Covina while hanging out with my girlfriend and her daughter. 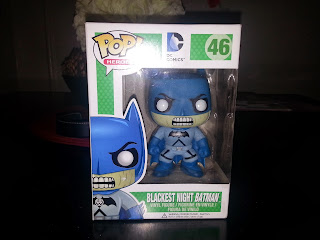 Wow, isn't he the ugliest thing?

In case you guys haven't read the Blackest Night arch, Batman  "died" in Final Crisis. In Blackest Night, the villain Black Hand is seen digging up Bruce Wayne's body, stealing his skull, and recruiting it into the Black Lantern Corps. The skull was briefly reanimated as a Black Lantern, reconstructing a body in the process by Black Hand's lord, Nekron, to move against the Justice League and the Titans. After the Black Lantern Batman created several black power rings to attach to and kill the majority of the Justice League, the skull was returned to normal after Nekron explained it served its purpose as an emotional tether.

When I originally bought the figure, I thought this was a Hot Topic exclusive, but none of these POP's I have seen has the sticker indicating that it is. However, I haven't seen this figure anywhere else, so it could be exclusive to the store. 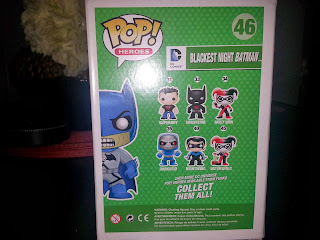 The back of the box shows off the rest of the POP figures in this run. I have seen the Harley Quinn POP's and I may grab one as it would look pretty cool next to my Joker POP on the shelf. I am also considering the Nightwing POP. 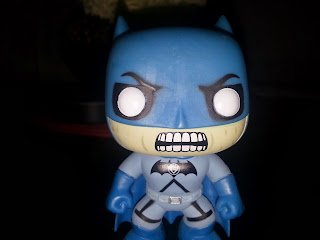 Here's an up close shot of the figure loose. The sculpt on this figure is awesome. It looks like it flew off the page of the trade paperback. The paint job on this is very impressive. You can see the zombie marks on his face, but what really freaks me out is his teeth. He obviously takes care of his teeth. This is one pissed off Batman. Then again, when isn't he pissed about something? This is the same look I have when I find out someone drank my Blue Moon and ate my Double Stuffed Oreos. 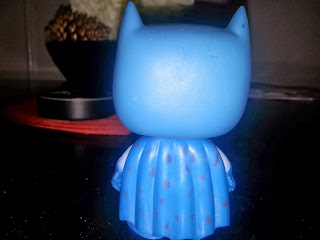 The back of Batman shows off his spots. I'm assuming that his cape zombified as well and that he isn't a dalmatian. Maybe his arch villain is Cruela DeVille. Ok, that was corny.

I have been picking up quite a few POP's lately and my collection is building. I can see myself picking up more POP Vinyls and expanding the collection. I have seen a few POP forums and when displayed, POP's are pretty sweet on a shelf. I still have one more POP to review and I'll do that in my next post.

As cool as this POP is, if I start having nightmares, this thing is history.
Posted by Yankeejetsfan at 12:03 AM