Spidey, You Can Drive My Car... 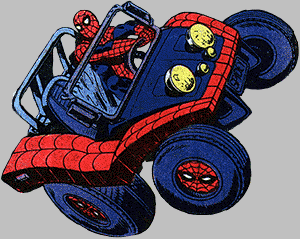 Yes, I threw in some Beatles for the title of this blog, with a bit of a change of the lyrics to "Drive My Car", which was off the magnificent album, "Rubber Soul". Maybe I should have added the Beep Beep, Beep Beep, Yeah to it.

Yes, even Spider-Man had a car. It was the idea of Corona Motors who had built a non polluting car engine. They hired an advertising firm to convince Spider-Man to build a Spider-Mobile. At first, Spidey turned down the idea, but needing money for rent and food, agreed to driving it around, even though he doesn't have a drivers license. So, Spider-Man and Johnny Storm built the Spider-Mobile and Spider-Man used it to capture Hammerhead's thugs with it. But soon after, he was tricked into driving it into the river by Mysterio. But Corona Motors wanted the car back, but Spider-Man couldn't find the car in the river. It resurfaced soon after, modified by the Tinkerer, going after Spider-Man. Spidey was able to subdue the car and return it to the advertising firm, in less than perfect shape.

Now, I am not a car person. I do have my drivers license, but I have never owned a vehicle. I don't know a muffler from a transmission or a Ford from a Chrysler. I never actively collected Hot Wheels or Matchbox cars. As a kid, I had a few, but they became contestants in my daily smash em' up derby. I do have a few Batmobiles, a couple of Monkeemobiles and Deloreans but that's about the extent of my car collecting.

Yesterday, my buddy George and I were hanging out in Fishkill, NY and wandered in to the Walmart. I was looking for a Spider-Man tank top that I had seen earlier in the year and cannot find in my size anymore (Note to self: When you see something you like, BUY IT!). Well, I couldn't find the tank top in my size, but I did find these. 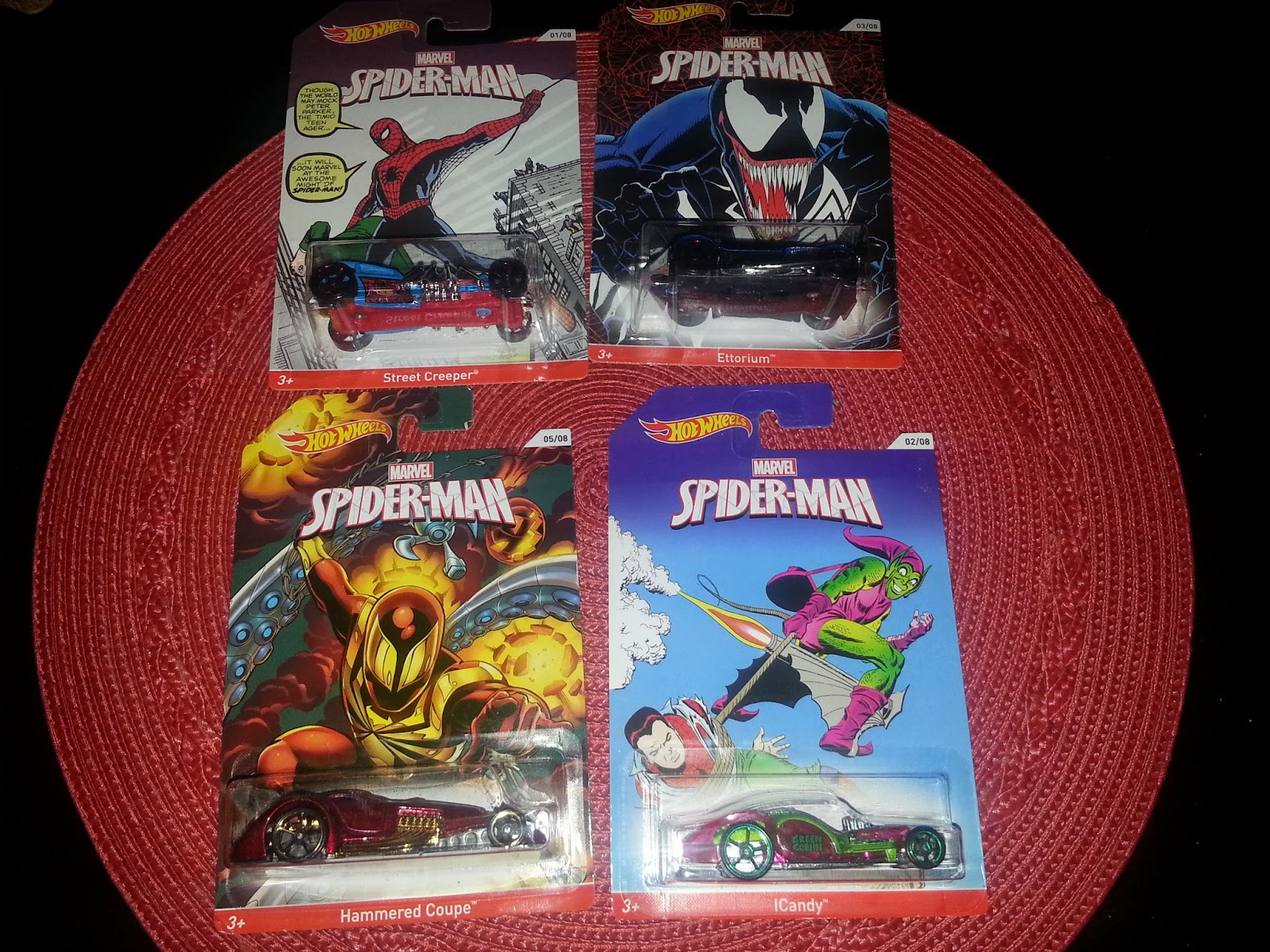 Again, I really don't buy cars, but when I saw these, I knew I had to have them. Why? For starters, the art on the cards are fantastic and the 97 cents price point was the deal maker for me. There were six different cars on the pegs, but I chose these four for my Spider-Man collection. 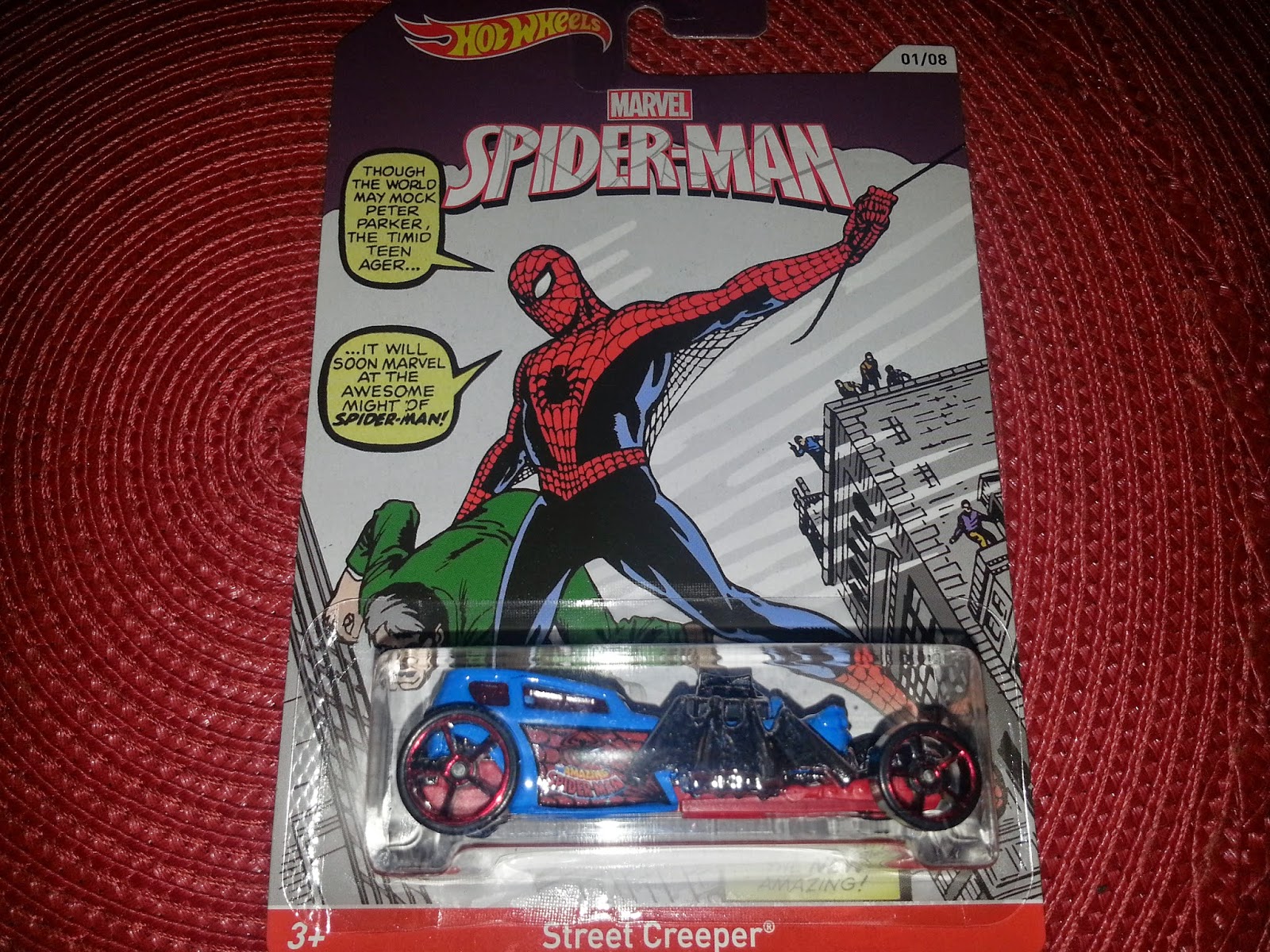 Cover of Amazing Fantasy #15 is a must pick up. 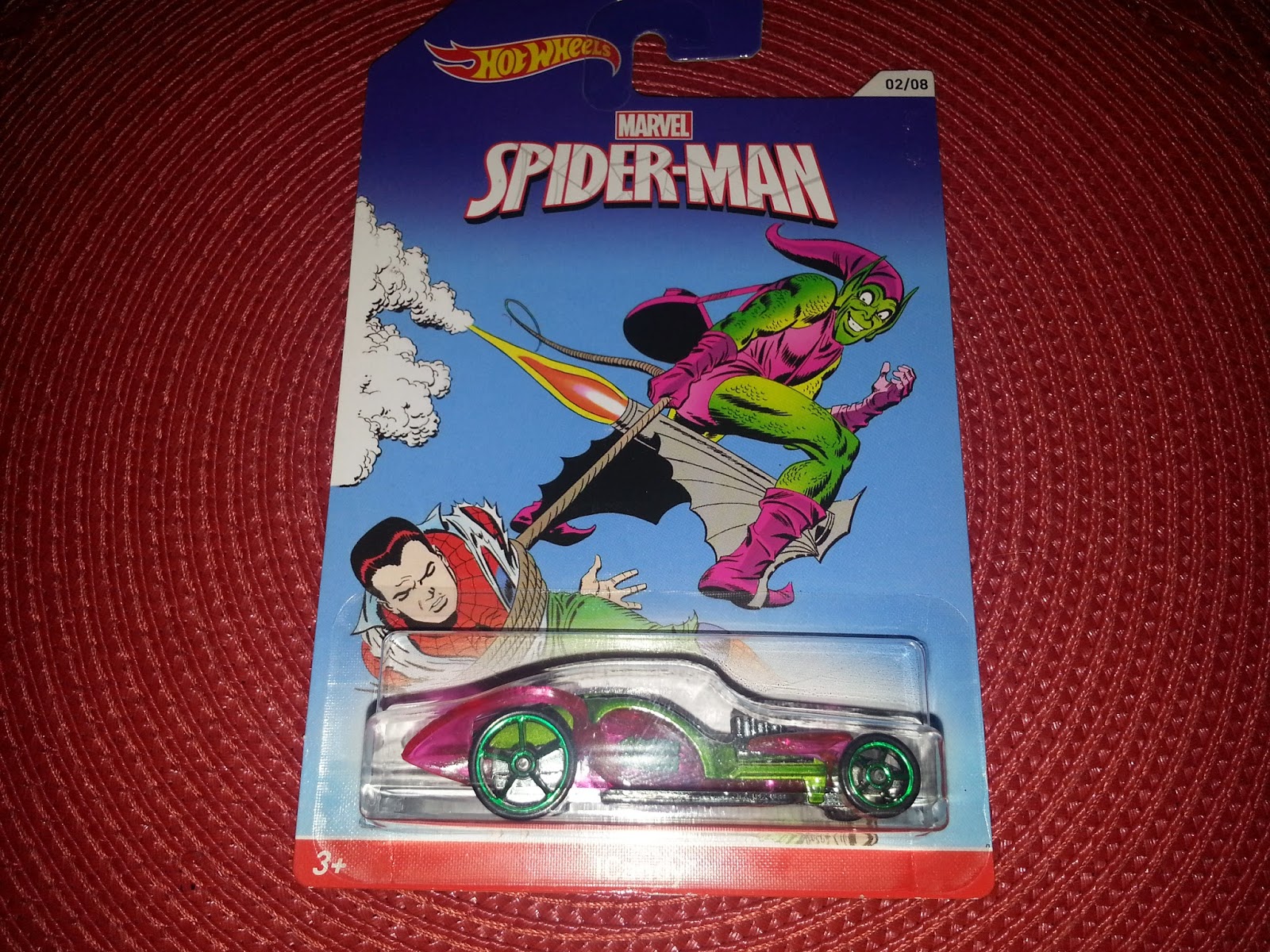 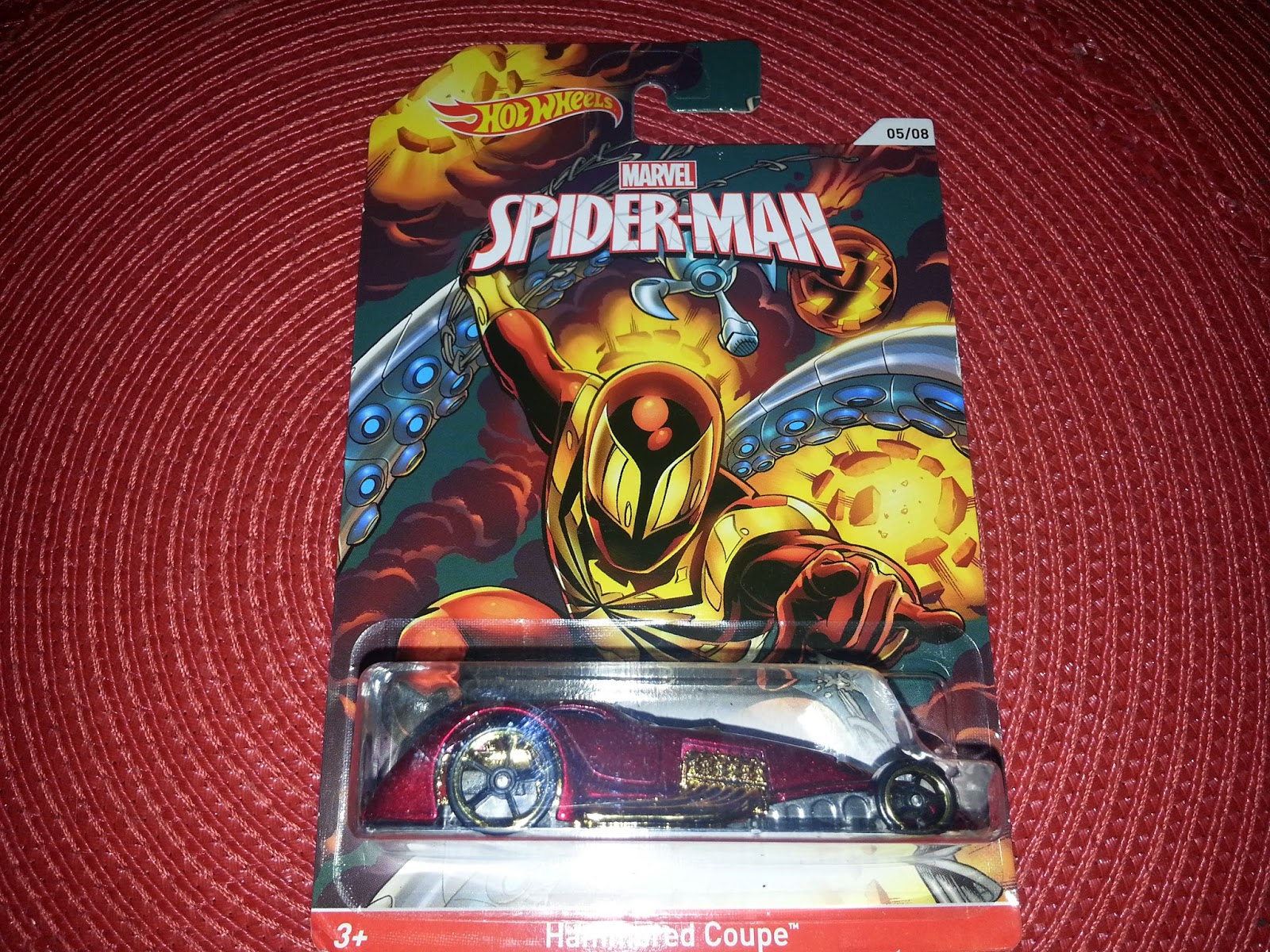 I may be in the minority, but I love the Iron Spider costume. I think that is a bad ass look for Spider-Man. 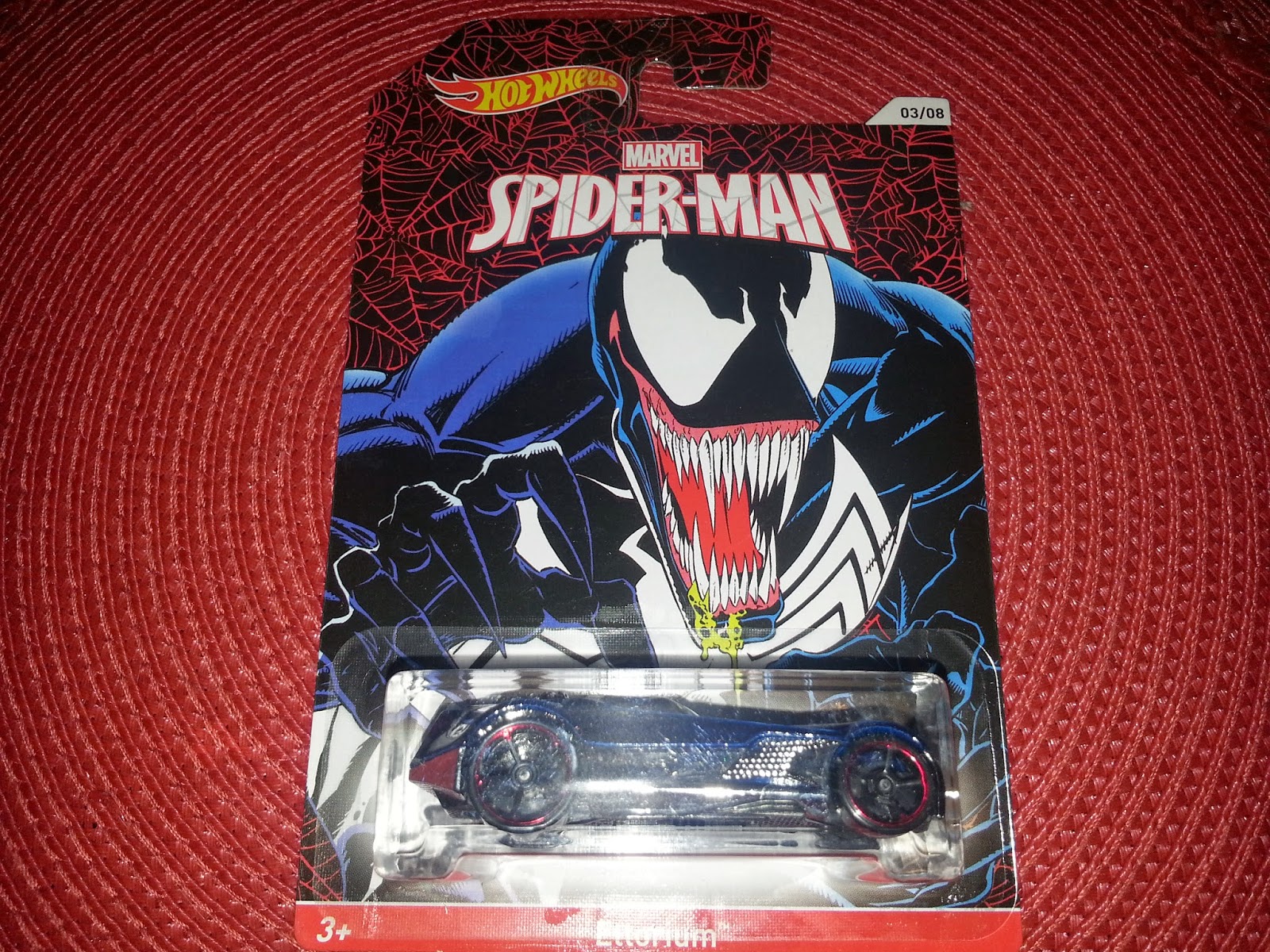 Who doesn't love Venom? I do.

I bought these more for the art on the cards than the for the cars themselves, so I want to try to keep the cards in as mint condition as I can. Then, when I finally have my Spider-Man display up, I will have to figure out how to display them on the shelf. Maybe I will buy those cases that car enthusiasts put their on card Hot Wheels or Matchbox cars in.

This set has 8 cars in it, so the next time I am in Walmart or Target, I will be looking to pick up the other 4 cars. I never thought I would be wanting to add cars to my Spider-Man collection, but here I am. Now, if someone could only make a comic accurate Spider-Mobile, that would be appreciated. I think.
Posted by Yankeejetsfan at 2:22 PM