Yesterday, the God's of cardboard saw fit to visit my mailbox. I got two ebay wins and a TTM. 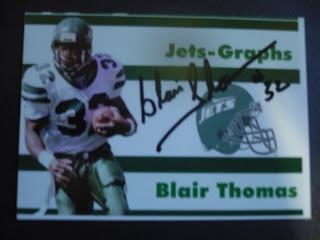 Blair Thomas signed this custom card for me, sent to his home address. Thomas is a former first round pick (second overall), who played running back for the Jets, Patriots, Cowboys and Panthers. He led all AFC rookies in total yards and yards per carry in his rookie year, but really didn't pan out as hoped. He co-owns a chain of bars in Pennsylvania called KoKoMos. 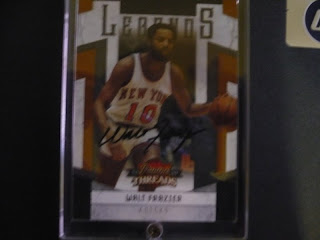 My first ebay win was this 2 card auction for a Panni Threads Walt "Clyde' Frazier autographed card and this triple autographed card of Ernie Vandewege (Yes, Kiki's dad played for the Knicks), Eddy Curry and Spencer Heywood from SP Authentic. I was able to win both cards for under 15.00 dlvd. Sorry abouth the picture. For some reason, it came out small. You would think I would have invested in a scanner by now. 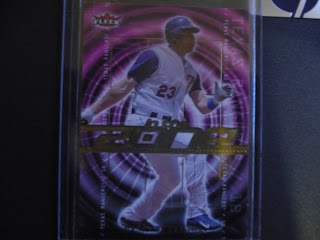 My other ebay win was this In The Zone insert from 2007 Fleer Baseball of Mark Teixiera. It is my 192nd diffrent card of his and I am inching closer to my goal of 200 before the end of July. I would like to have 400 by the end of the calender year, but we all can't get what we want.

Posted by Yankeejetsfan at 1:43 PM