It all ends tonight 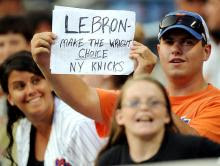 Dear LeBron,
Well, you've done it. You have the entire world hanging on where you will be come October. Through all the countless news reports, breaking stories from "reliable sources" and tweets, you have every one guessing and tuning in to your descion tonight on ESPN. If it wasn't for the fact that your donating some of the proceeds from the sponsorship to the Boy and Girls club, this show would have made you look like a prima donna. Well, lets be honest here, it still kinda does. I mean really, does anyone need a whole hour to make a 15 second announcement?
So, the obvious question is before us, where are you haning your size 16 Nikes next season? Are you going to practice that loyalty line you've been feeding us and stay with the Cavs? Are you going to join the dynamic duo of Wade and Bosh in South Beach and make the trio of Allen, Pierce and Garnett look like the Little Rascals in terms of star power. Will you head up to Chicago for some deep dish pizza and live in the shadow of Michael Jordan or will you go to play for the Nets where you can hang out with you buddy Jay-Z and sip Stoli Vodka with the russian billionare owner or will you come to NY and bring the Knicks back to the NBA elite. As you already know Lebron, you have plenty of choices.
As a Knicks fan, I would love to see you wearing the blue and orange and lighting the Garden up on a daily basis. It's been too long since we had a great player. Far too long since we mattered in this league. We were once among the very best in the NBA and now, we're a joke. Too many players that didn't pan out, too many failed draft picks and horrible moves made by incompetent executives (Isiah Thomas anyone?). Scandals, fired head coaches and horrible cap issues plagued this team for far too long. Your arrival would change all that. The Knicks would matter again. add a few pieces here and there and the Knicks could actually contend for an NBA title again. Ask Mark Messier what it's like to bring a once dormant franchise back to championship glory in NY at the Garden. Before his arrival, he was just a part of the Oilers Dynasty, second fiddle to Gretzky. Now, in NYC, he's God. That could be you, times ten Lebron. You go to Chicago and win one, maybe two championships, they will always say, "Well, that's great, but Michael won more. He's no Jordan." Here, the masses would line up and kiss your Nikes if you win even one title. Plus, I hear the marketing is the best in the world. Oh, and we have your favorite baseball team, The Yankees. I'm sure getting you box seats at the Stadium wouldn't be a problem.
I'm sure you've heard all the sales pitches as you sat on your throne. I bet you've tossed and turned in your royal bed and spoken with your leeche....I mean associates. I'm sure you will make the best decision for you and your family. If you decide that you want to stay in Cleveland and try to finish what you started there, then I think that's terrific and would wish you all the luck in the world. Heck, I expect you stay. But if your leaving, then why not come to New York and play in front of the greatest and most knowledgeable fans in the world. Why not be known as the man who made the Garden matter again? I guarentee you, if at 9:15pm tonight you tell the world your becoming a New York Knick, I will elbow Spike Lee aside at the front of the welcoming wagon, give you your Knicks jersey and bow to you and say, Hail King Lebron.
Posted by Yankeejetsfan at 8:55 AM