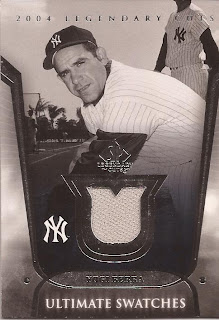 Happy Birthday to the greatest living Yankee, Yogi Berra. Born May 12, 1925, Yogi is considered one of the greatest catchers in baseball history. Yogi is a 13 time world champion (10 as a player, 3 as a coach for the Mets and Yankees), a 18 time All Star, a 3 time MVP and was inducted into the Baseball Hall of Fame in 1972. Rightfully, his number 8 has been retired by the Yankees, although he did share the number with former Yankees catcher and HOF'er, Bill Dickey.

This game used card is from Upper Deck Ultimate. I picked it up at a card show a few years ago. I wanted to show off the two autos I have of his, but alas, they have not been scanned yet nor has the other game used jersey card or Yankee Stadium seat card I have. The only thing I'm missing is a signed baseball from Yogi and I hope to have that in June when he makes an apperance for the New Jersey Jackels in Montclair University in Monclair, NJ.

Happy Birthday Yogi. If you come to a fork in the road, take it.
Posted by Yankeejetsfan at 2:29 PM