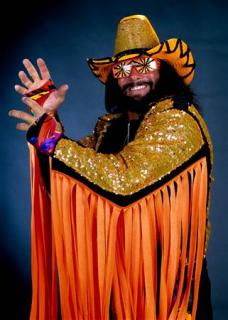 Very saddened to hear of the passing of WWE legend, Macho Man Randy Savage, who died today after suffering a heart attack while driving his Jeep Wrangler and crashing it head on into a tree in Seminole, Fl. Savage's wife, was with him and escaped with only minor injuries.

I have been a huge wrestling fan since 1982 and continue to follow it to this day. Randy Savage was always one of my top 5 favorites. One of the most intense wrestlers ever, no one combined speed, agility and brawling like Savage did. He was a 2 time WWF Champion, 4 time WCW Champion, an Intercontinental Champion and won the 1987 WWF King of the Ring Tournament.

Savage wrestled in some of the most memorable matches in WWE history, including his classic against Ricky Steamboat at Wrestlemania III. He also had memorable feuds with Hulk Hogan, Ric Flair, The Ultimate Warrior, and Jake "The Snake" Roberts. He was also a part of the NWO while in WCW.

For much of his career, he was bought to the ring by his real life wife, Miss Elizabeth and came out to Pomp and Circumstance. I cant hear that song at a graduation without wanting to scream OOOOOOH YEAH!

Thanks for the memories, Randy. Macho Madness will live forever.
Posted by Yankeejetsfan at 3:03 PM