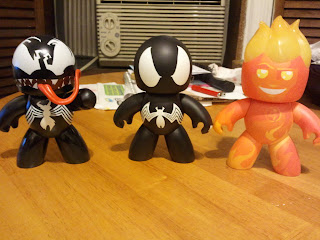 With New York Comic Con 2011 a few days away, I am trying my best not to spend any money so I can blow it all at the convention. That said, A week ago, I was on shopgoodwill.com, browsing. I wasn't planning on buying anything until I saw a post that had these three Mighty Muggs. A Black Suit Spidey, a Venom and a Human Torch. I wanted to try and put together the Spidey set of Mighty Muggs as I already have the red suited one, still in the box. The auction was starting at 5.00, with 5.00 shipping. I placed a bid for 5.50, not really expecting to win. Heck, on ebay, Venom is usually a 25.00 figure. I thought what the heck.

I got an email from Goodwill a couple of days later informing me of the win. I expected to pay only 10.50, but to my surprise the total was 19.95. Apparently, there are taxes and fees placed on the winning bid. Never having bought anything from Goodwill before, I was a bit stunned. I just chalked it up to my money going to help the less fortunate, paid my bill and waited for the package which arrived today. I gotta tell you, the figures, not coming in their original boxes, were packaged great and look great in person. 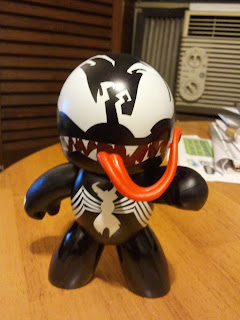 Of all the Spidey villians, Venom shares the top spot with the Green Goblin. Hated the incarnation we saw in Spiderman 3, I perfer to think fondly of the Todd McFarlane version who tormented Peter Parker, wanting to eat Spider-Man's brains. As much as I like Venom, I don't have any Venon collectables...until now. I really try not to collect the villians due to space, but this Venom figure is awesome. Love that the tounge is not painted on this figure, which gives this Mugg a more demonic look. 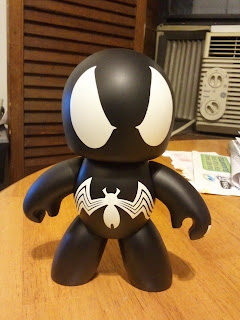 Had to have this Spidey figure. This will look great on my Spidey shelf next to the red suit Spidey I bought a couple years ago from Toys R Us. All I need to complete the Spidey collection is the half Parker/half Spider-Man and the 2011 San Diego Comic Con Exclusive with the removeable mask. I'm hoping I can grab those at New York Comic Con. If not, there's always ebay. 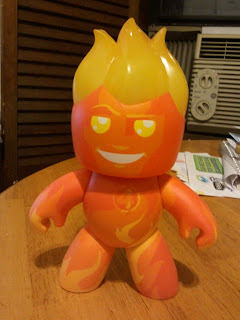 Johnny Storm may be dead, but he looks pretty cool in Mugg form. This was the "throw-in" of the bunch. Not collecting anyone but Spider-Man and Batman, I'm probably going to trade this guy, although I am tempted to keep him. Again, love that the flames on his head are actually molded plastic and painted to look like he just Flamed On! Might have to think about holding on to this one...

Dispite the added costs, I'm very pleased with this purchase and would probably order through shopgoodwill.com again. I'm sorry they stopped producing these. Would have loved to have had a DC Line with a Batman made. I might actually put together the Avengers Set later on and might have done a Justice League had DC given up a licence to have them made.

Oh well, I will just enjoy the ones I have and continue on my search for the other 2 Spider-Men Mighty Muggs.

See you at New York Comic Con!
Posted by Yankeejetsfan at 9:32 PM