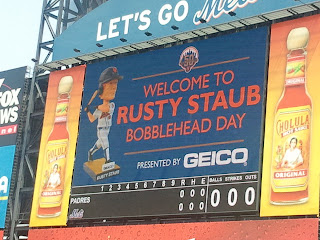 So, yeah. I went to Citi Field again for another Mets bobblehead. I just can't resist a bobblehead, especially if its free. I may not root for the team, but I will display the bobblehead with the other Mets bobbles I already have.

It was a beautiful day for baseball. 80 degrees and sunny. I got to the ballpark to meet my buddy at 10:45 am and got on line. I decided to wear my Jets Neil O'Donnell jersey. I was going to wear my Red Devils Marty Brodeur tshirt to celebrate my Devils making their 5th trip to the Stanley Cup Finals, but I was "advised" not to. When I saw the first 5 Devils tshirts at the game, I kind of regretted the decision. But I had a steady flow of Jets fans complement the jersey. Whenever I go to a Mets game, I always wear a Jets jersey or t shirt because I still remember going to my first Jets game as a kid at Shea and I wear Jets gear to celebrate that.

I had never been to the Pepsi Porch before, so I went to watch a bit of batting practice up there 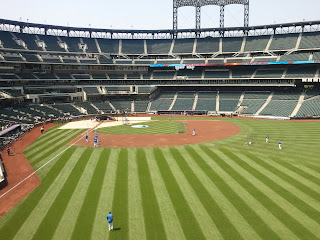 No balls were hit up there this time, so after an hour, my friend and I went down to hang out a little. Former Met Art Shamsky was signing in the Verizon Area. I wasn't aware of the signing and left the Mets 50th anniversry 8x10 at home, so I didn't wait on line for the auto.

As for the game, Johan Santana pitched a complete game  4 hit shutout as the Mets beat the Padres 9-0 behind home runs by Scott Hairston, Vinny Rottino and a grand slam from Mike Nickeas. During whch, I ate a Tex Mex Burger, Ice Cream and drank a bud and 2 sodas. Yep, quite the fatty. I will be paying for this on the treadmill this week.

Now on to the bobblehead.

Up first is the box, with 2 vintage shots of Staub on the box. 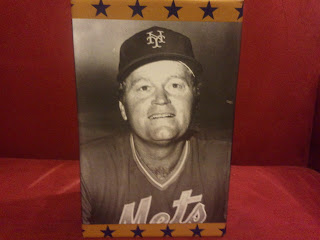 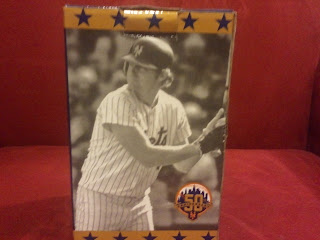 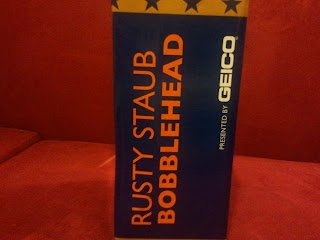 Now the bobblehead. The paint job isn't the greatest, but it's still a pretty nice bobblehead. I think Rusty is wearing one of the Mets road uni's from the 70's/80's. I want to say late 70's because it would keep with the theme of picking Staub for the Met of the 70's bobblehead. 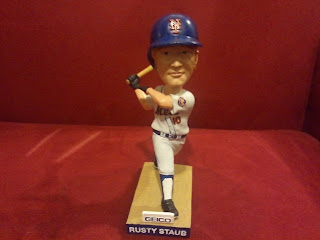 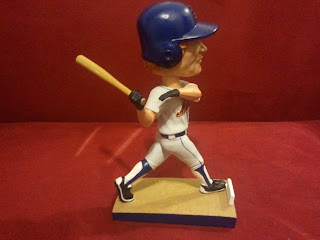 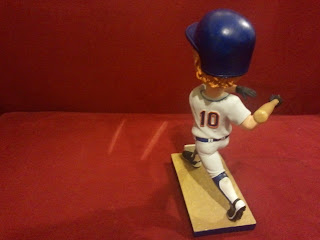 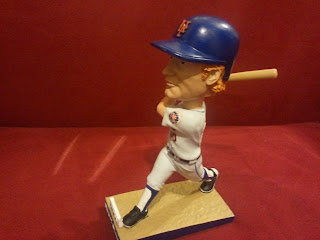 Again, I think it's a pretty nice bobblehead, sponsored by Geico. I just think there were other Mets they could have given this slot to like Tug McGraw or Jerry Koosman.

The next Mets bobblehead give away is of Keith Hernandez. Not sure I will make that one. But knowing me, I will try to make it, I might try to complete the set just for the heck of it. There is no pic of the bobble up on the Mets website just yet, but I'm sure it will be a nice one. I just hope it has Mex wearing the blue Mets road tops instead of the ugly Mets home unis that had the racing stripes going down the sides.

I do have an extra for trade. I found an extra that was left behind. People were also leaving these on the staircase bannisters, but without the bat, so I let my buddy grab those. If intrested, let me know in the comments section. I'm looking for Yankees, Jets, Devils, Knicks, Mascots and HOF player bobbleheads. Would consider a superhero figurine as well.
Posted by Yankeejetsfan at 7:02 PM