Thanks to the success of The Avengers, this weeks league assignment was a simple one:

What pop culture heroes or stories would make for the ultimate crossover–think along the lines of Han Solo meeting up with Firefly’s Mal on a smuggling run.

It took me a while to think of something. Something along the lines of Spider-Man fighting Doc Ock with Daredevil or Luke Skywalker fighting the Vulcans with Capt. Kirk. I wanted something epic. Something no one had ever, would ever come up with. Something worthy of League status and I think I finally came up with something.

Imagine with me, if you will.

Gotham City. Commissioner Gordon is waiting by the Bat Signal. Batman arrives by Bat -Rope. Gordon explains the Joker's escaped Arkham Asylum and has begun posioning Gotham's fish supply to try to market his own brand of Joker Fish. Gordon wants Batman to put a stop to the Clown Prince Of Crime's latest crime spree. Batman explains he might need some help on this one as he is not an expert on marine life. He would bring Aquman to help. Gordon informs him he came up with someone better. From a distance, a Tarzan like yell is heard through the night. Looking up, Batman and Gordan see a man, bent over, talking out of his butt. 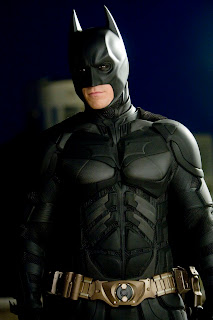 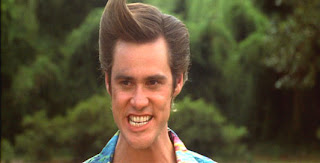 This has money maker written all over it. Imagine the frustration Ace would cause Batman as he would get in the way of all Batman's interrogations with faces or imitaions of famous celebrities.

If he needs Ace to drive the Batmobile, covered 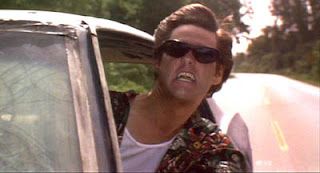 Or infiltrate the Joker's gang, check 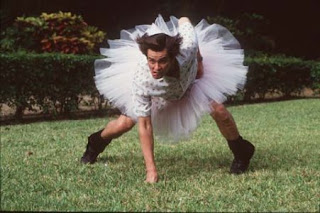 Between Batman and Ace Ventura, The Joker hasn't a chance. Think we have a hit here.