I Think This May Be Bigger Than A Womp Rat 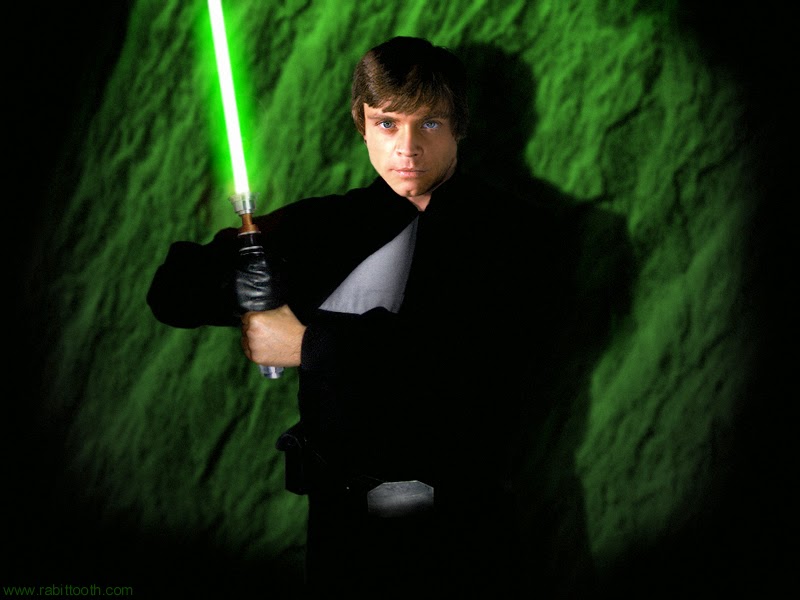 Ever since I was 6 years old, Luke Skywalker has been my favorite Star Wars character. Whenever I would get Star Wars toys as a kid, somewhere in the lot there would be a Luke Skywalker I would gravitate to and play with above all the others. I wish I still had them all, but I lost them in the great war of 1982 when my sister and I were at war and destroyed each others toys. She threw out all my Star Wars stuff and I played skydiving with her Barbies from our 6th floor window.

Ever since I decided to restart my Star Wars collecting, I made sure I focused on Luke Skywalker, picking up as many pieces of him as possible. From puzzles to action figures to cups to calendars, anything that has Luke on it, I usually picked up. But I can't say I'm doing it all by myself.

My buddy, George, gave me some late Christmas presents and one of the items fits right into my Skywalker collection. 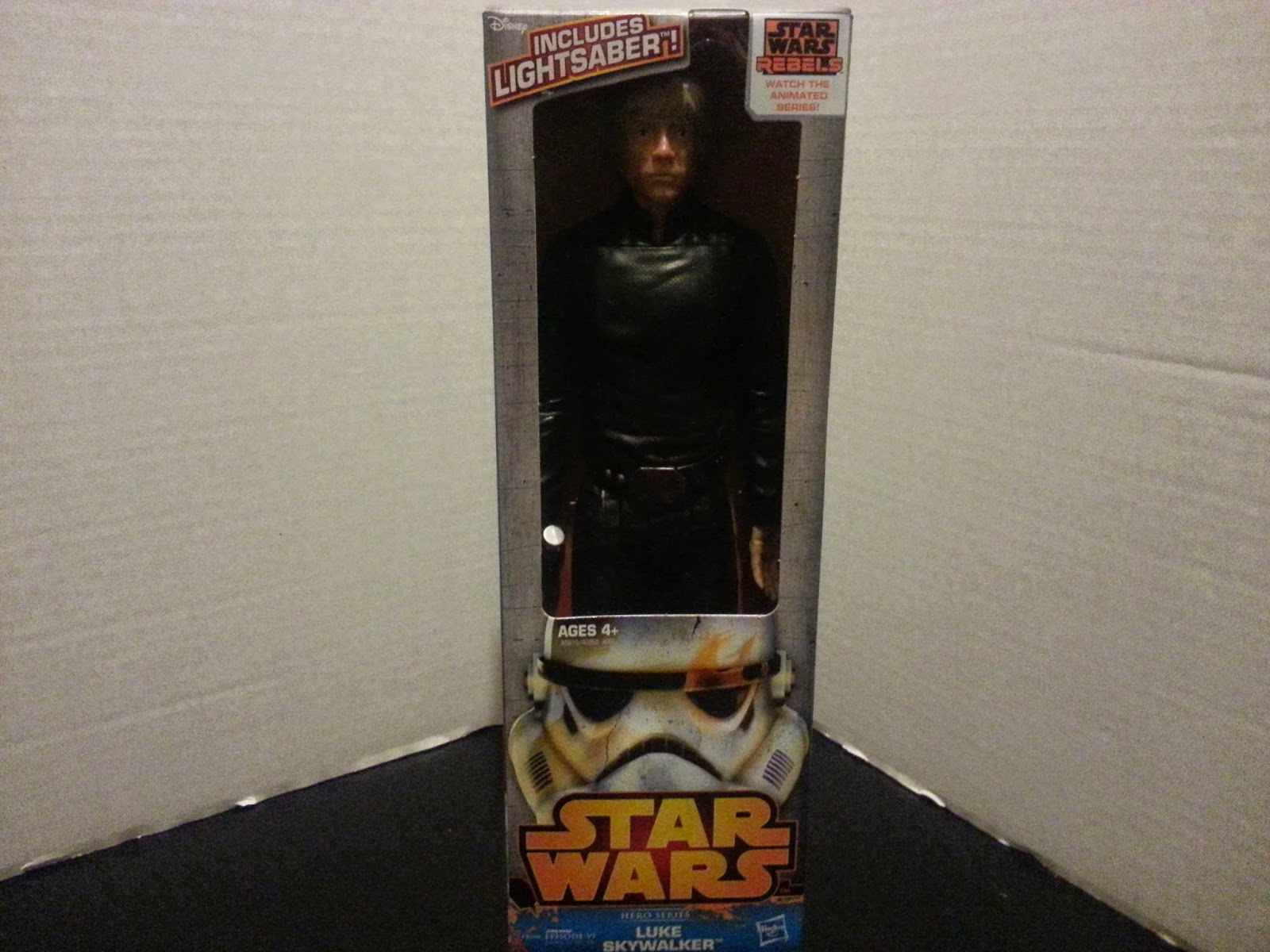 Recently, Hasbro released some Star Wars Titan figures in their Star Wars: Rebels line. I've never seen the show on Disney XD, so I don't know if it's any good. To me, if it has nothing to do with my beloved characters from Episodes III, IV and V, I have no interest. I gave the Prequel characters a chance and wasn't crazy about them. Also, I'm not sure why Luke was released in this line, unless he will make an appearance on the show or will at some point. All I care about is I get a new Luke Skywalker in my collection.

As with all Titan figures, they come in a box with a cellophane front and some art underneath. In this case, we get a Stormtrooper with the classic Star Wars lettering under the Stormtrooper, which is enough to make me squeal like a 10 year old. 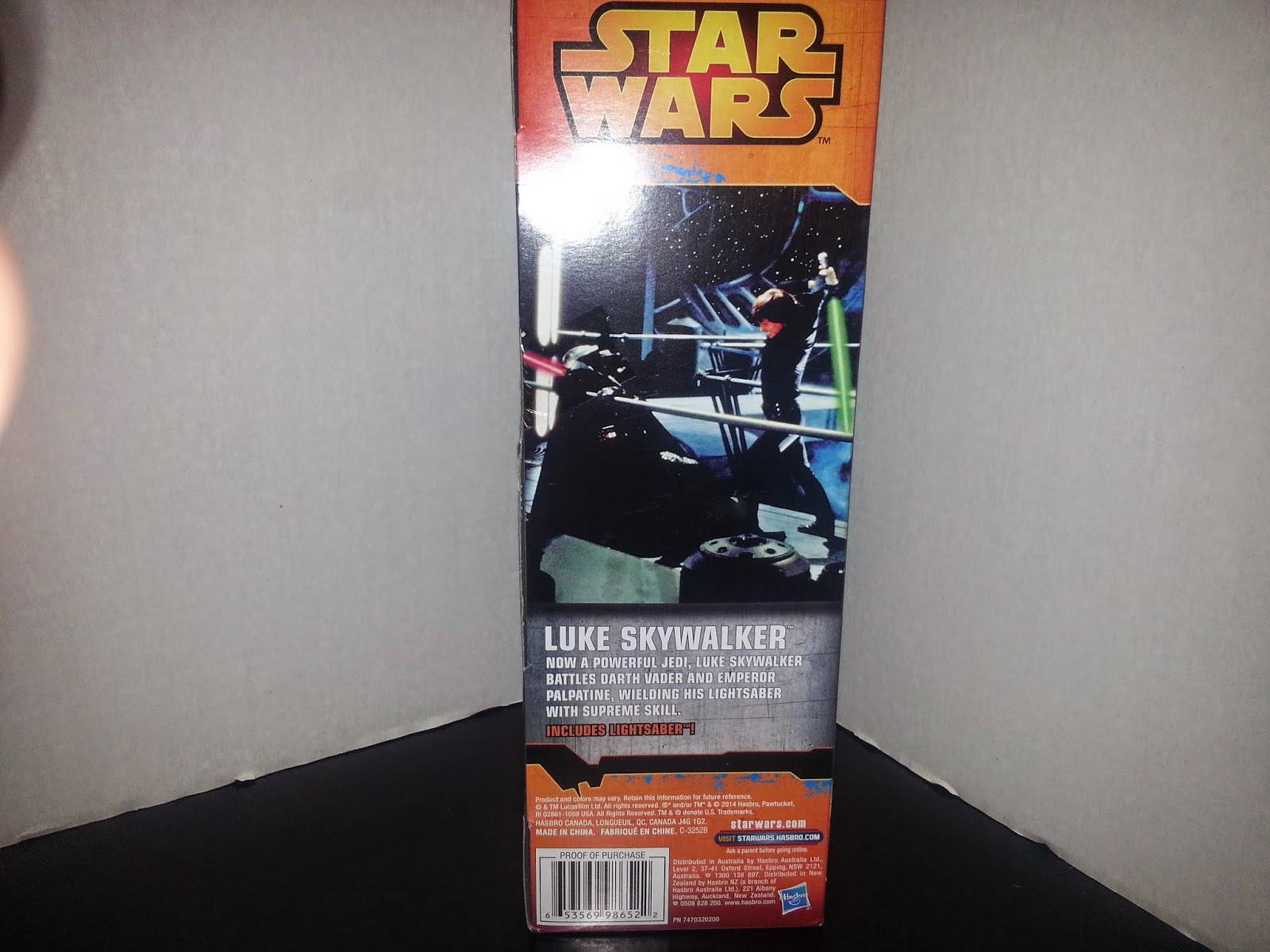 I love the back of the box as it a has a great action shot of the final battle between Luke and Darth Vader in Return Of The Jedi. The picture captures Vader down for the count with Luke about to deliver that final blow that chops Vader's hand off. If I was Luke, I would have been like "A hand for a hand, eh Daddy"? That is probably why I will never be a Jedi. Much anger in this one. Then again, there is no such thing as a Jedi Knight, no matter what those cos players tell you at conventions.

I had wanted to keep the box for display purposes, especially since I was digging that picture on the back so much. Unfortunately, Hasbro did not make getting the figure out all that easily. I would have hoped I could have slide the figure out, but no. It was tied down to a piece of cardboard that was glued to the box. What the heck?? I had to tear apart the box to get the figure out so I could cut the elastic like strings off to set him free. After I was done, there was no box. just one long piece of cardboard. It looked like a piece of the skin off an orange if you peel it right. 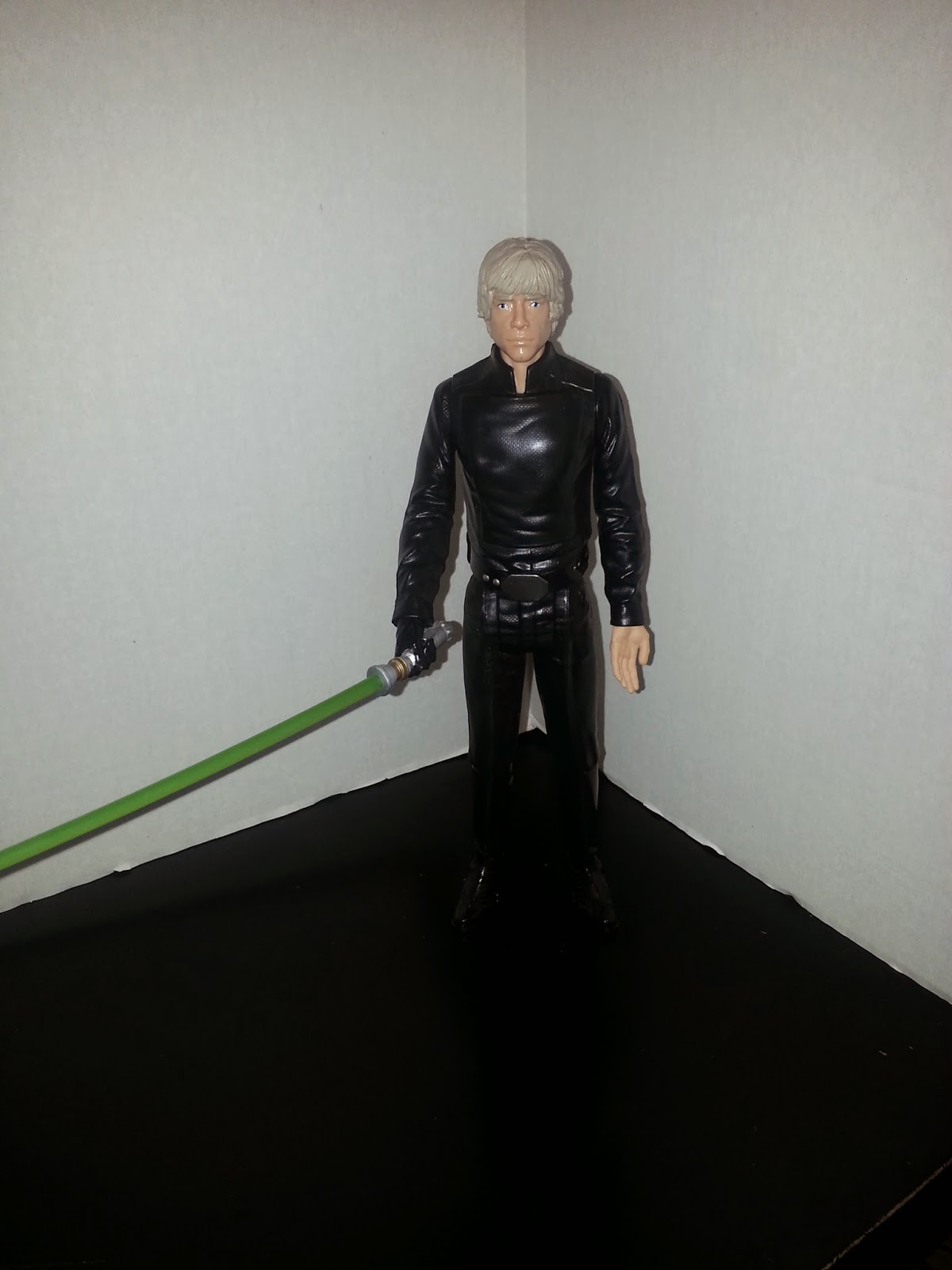 Here is Luke out of the package. Right off the bat, I like that he's wearing his Jedi outfit from Return. He also looks enough like Mark Hamill for this figure to work out well. 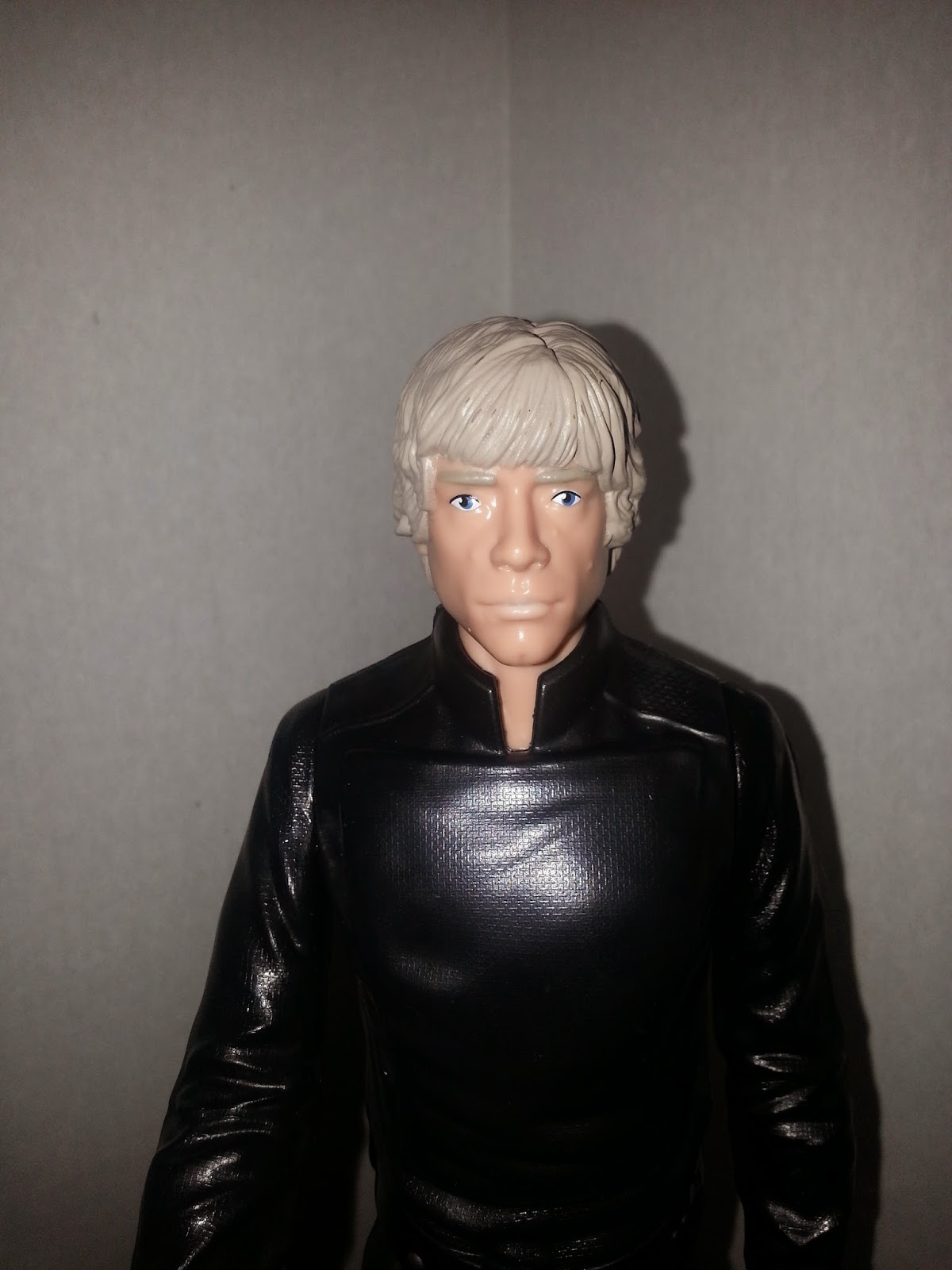 I did say he looked enough like Hamill, not totally like him. There's enough there where you can look at the figure and say, "OK. I see it." Only thing I might have done was darken his hair just a little. Mark Hamill has dark blonde hair. Not very light blonde that the companies have been putting on him since the 70's. I never got that. 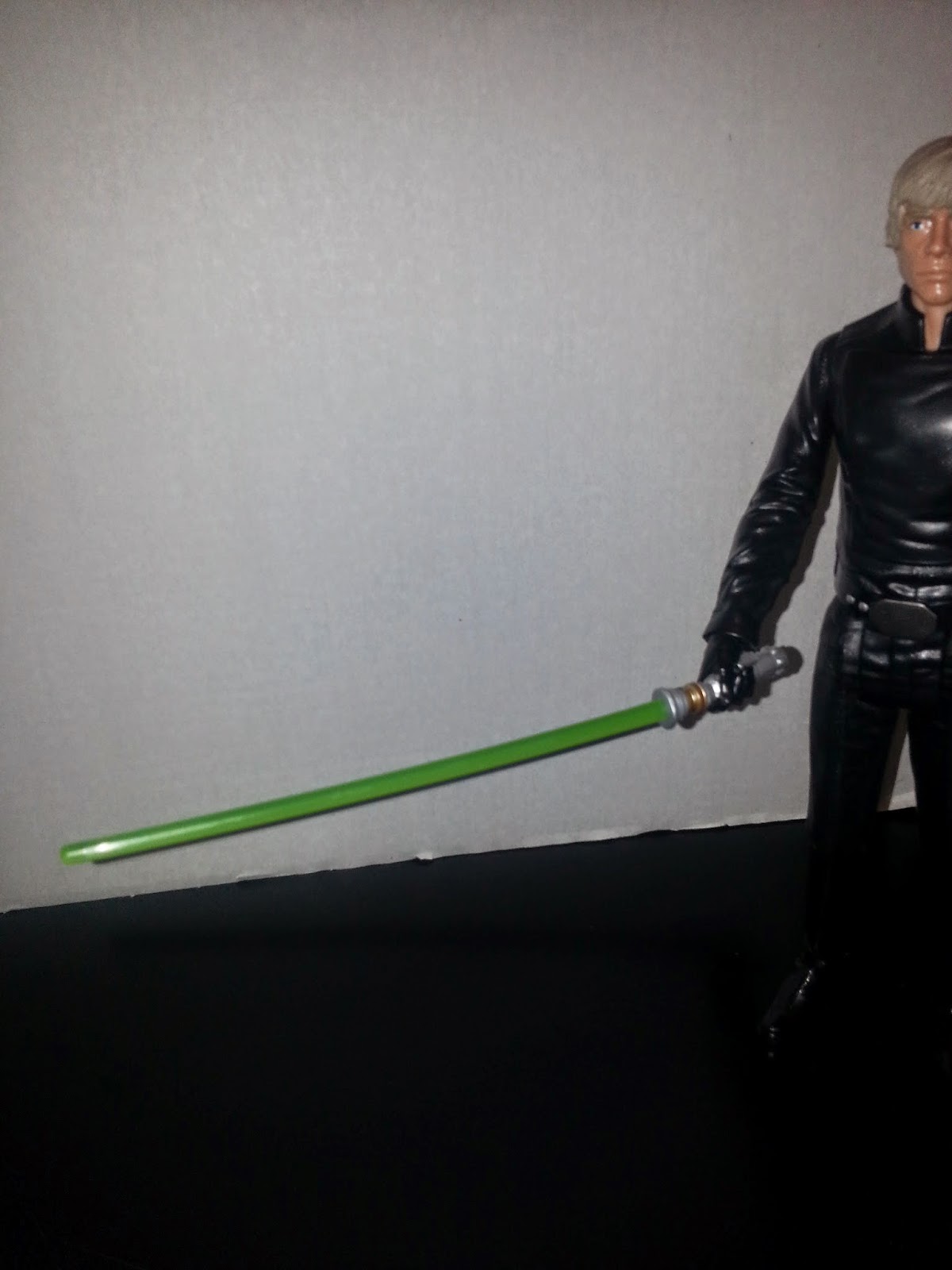 The only accessory that came with the figure was his green lightsaber, which I'm glad we got. Of the two lightsabers Luke had, the green by far is my favorite. Not sure why since blue is my favorite color. I thought, and still do, that the green made Luke more of a bad ass than the blue one did. The hilt on this lightsaber is a little bit bent, so I will have to figure out a way to straighten it out since I'm pretty sure Luke had a straight hilt and not the curve on the end that I have seen on some lightsabers. 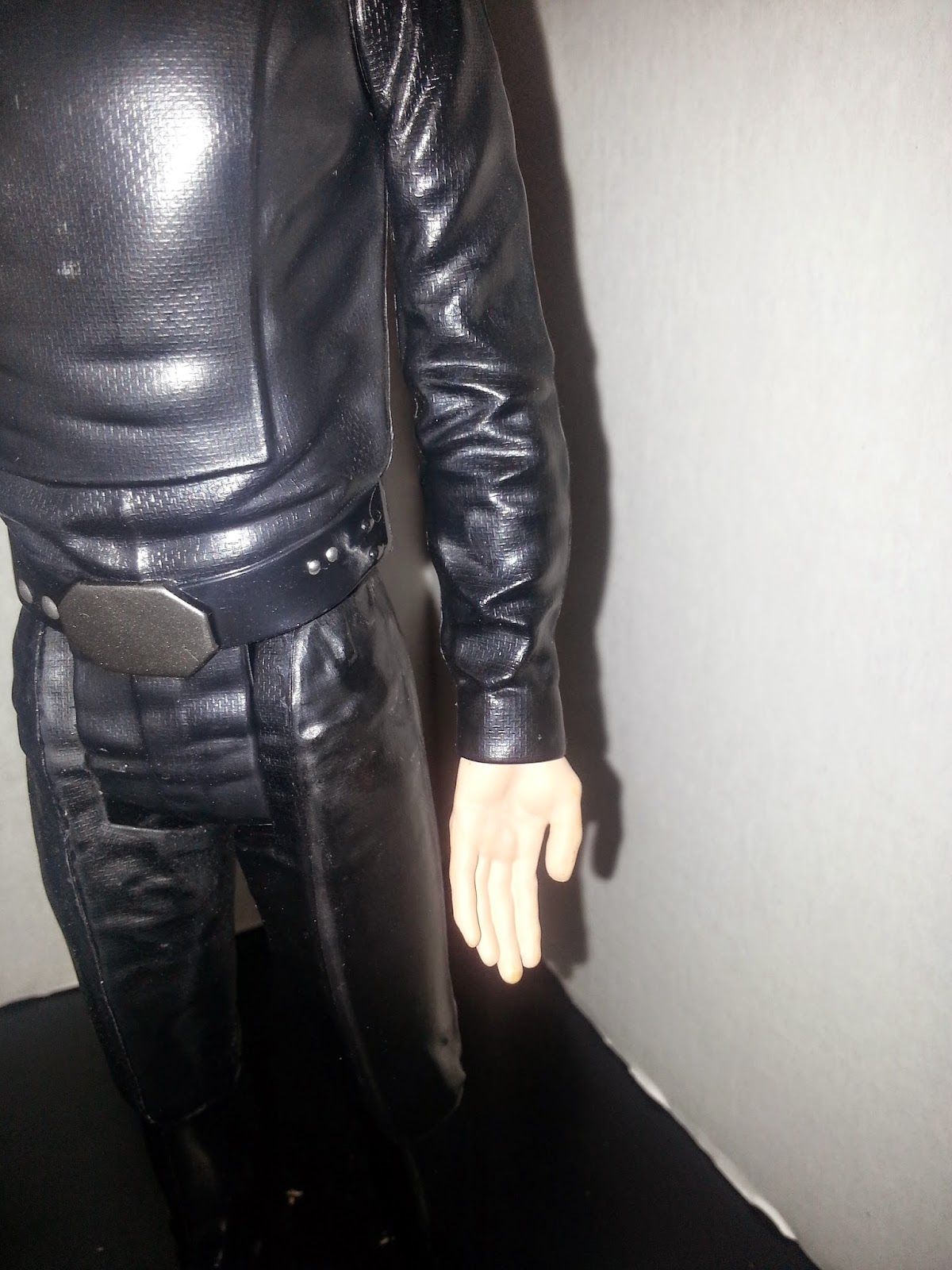 There is barely any articulation to this figure. Luke's head turns slightly from left to right, the arms do a full 360 rotation at the shoulder and the legs go up in front and that's it. That's not a problem for me. My problem is if we weren't going to get wrist articulation, why is Luke's hand out stretched instead of at his size? It's not like we can pose this figure, so I fail to see the reasoning for the palms out theory with this figure. 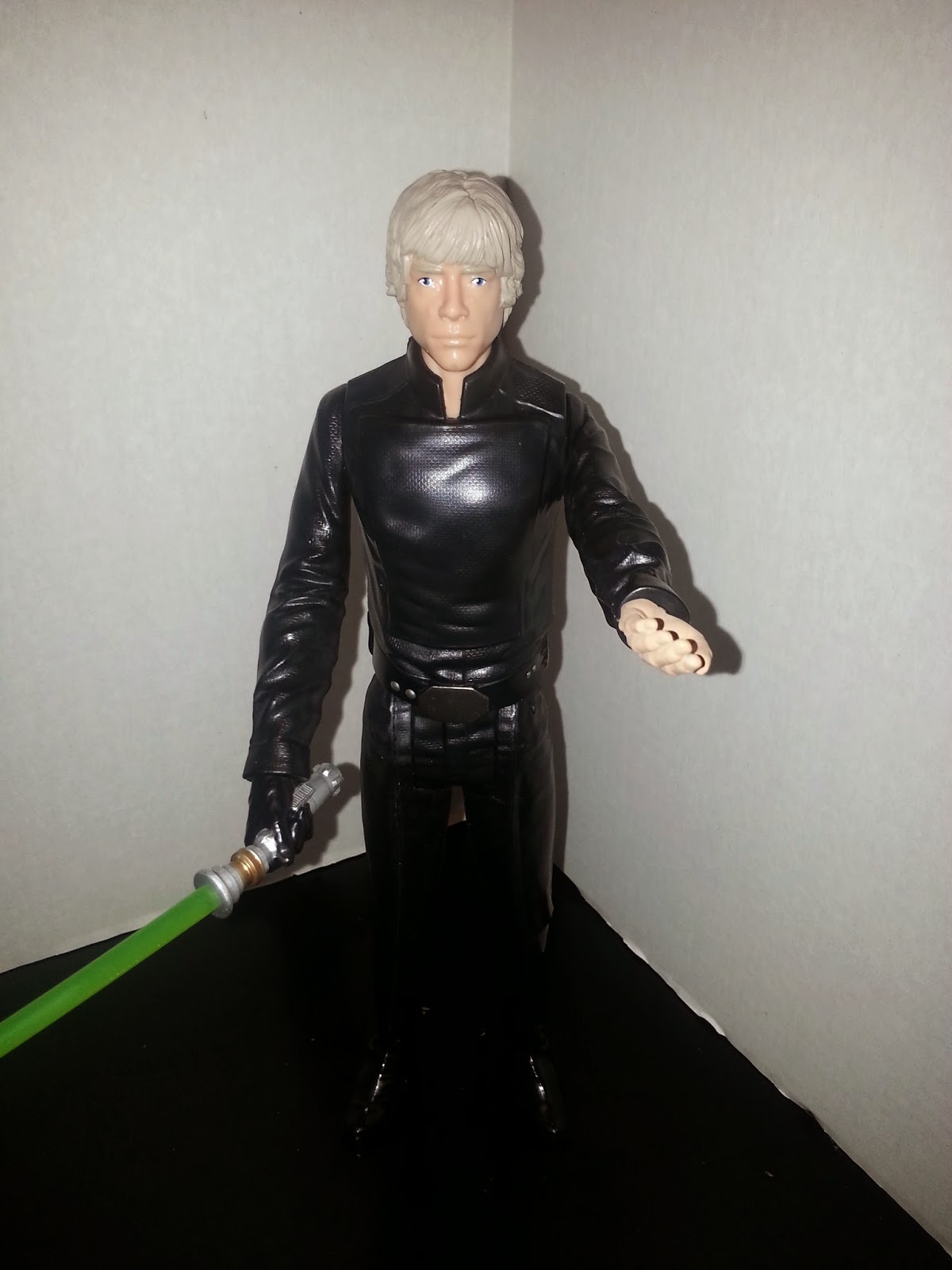 Maybe Luke is asking Vader for some long overdue child support? No wonder he chopped Vaders hand off. The cheap Sith Lord. 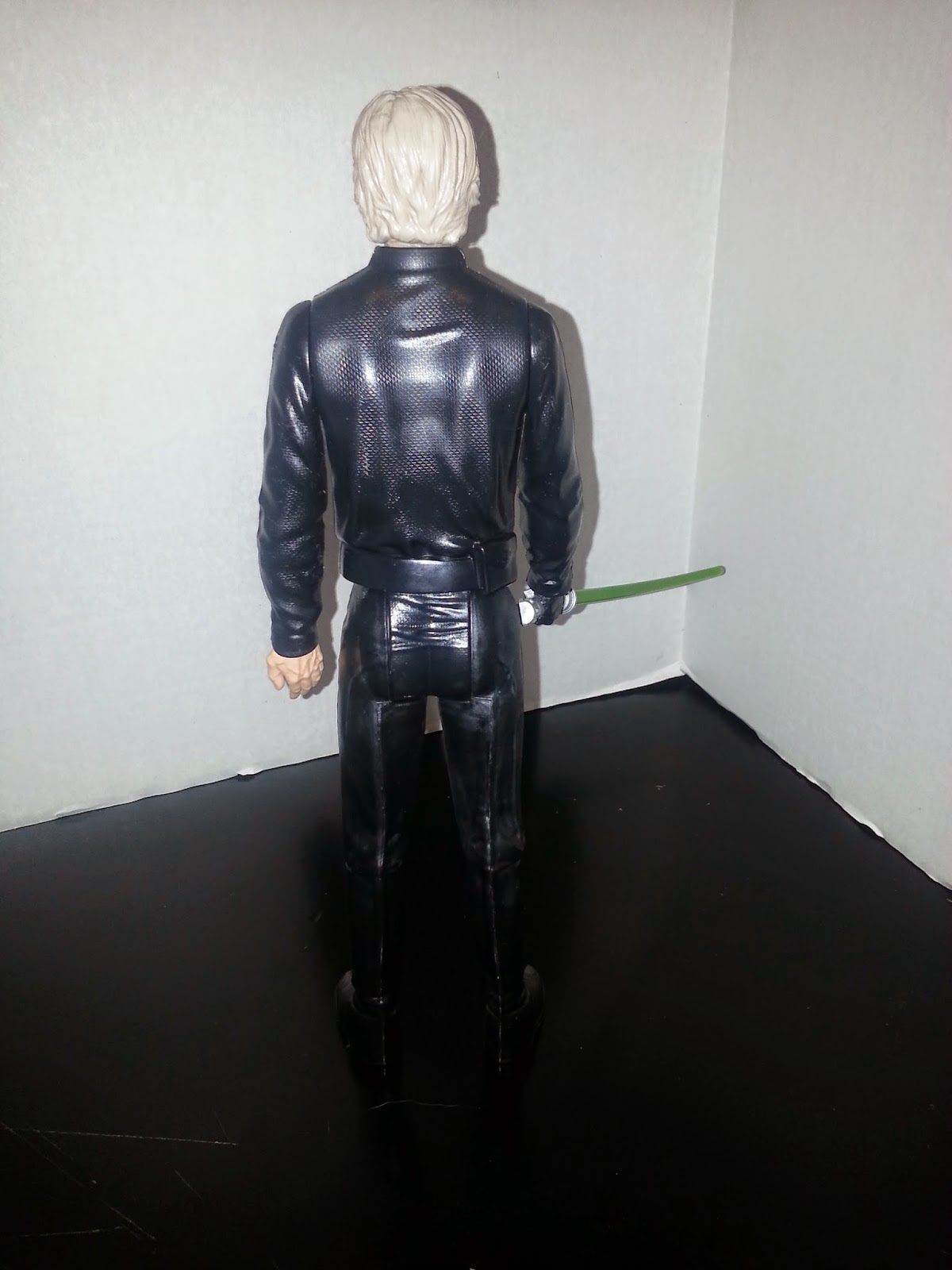 The paint on the back of the figure is as good as the front is. Hasbro did a bang up job on the paint application. I did not see any splotches or messed up paint on any part of the figure. 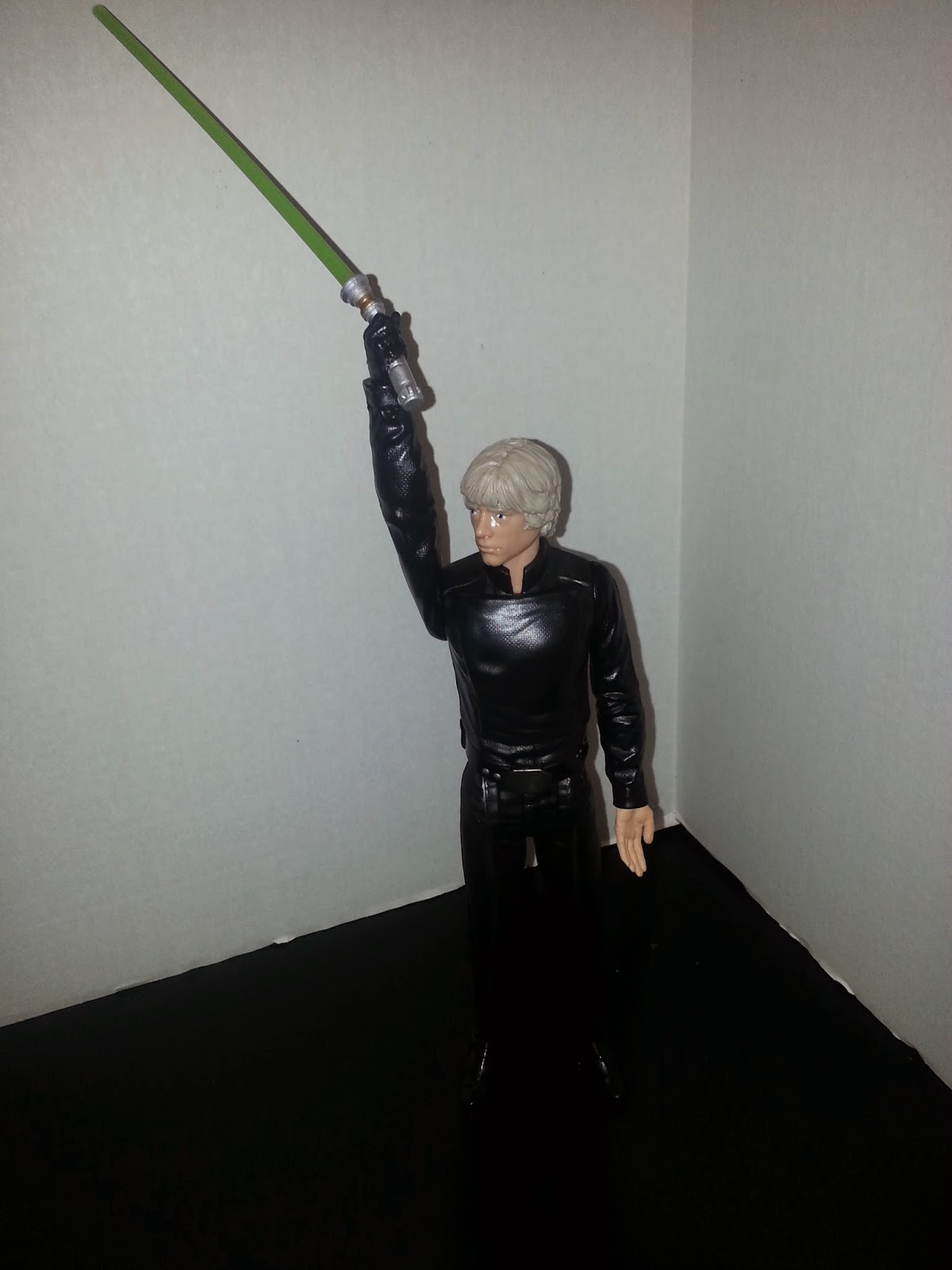 That's as much posing as your going to get out of this figure, but I really don't care. It's a new Luke Skywalker figure that has been added to my collection and I am very glad to have it. Once I am able to display my collection, I figure (Pun intended, heh heh) this will have a prominent spot next to my other larger Skywalker figures.

Like most of the free world, I am looking forward to Star Wars: The Force Awakens. I usually avoid seeing a newer release with crowds, but I may break that rule just to see this movie. I have been on such a Star Wars kick lately. I've watched New Hope, Empire Strikes Back and Return Of The Jedi all weekend get my Star Wars mojo flowing. The 2 best things about The Force Awakens? We get the original cast back and we are sure to get more Skywalker collectables for me to pick up. That's a win win...for me at least.
Posted by Yankeejetsfan at 7:30 PM