I Was Doing The Batutsi Recently 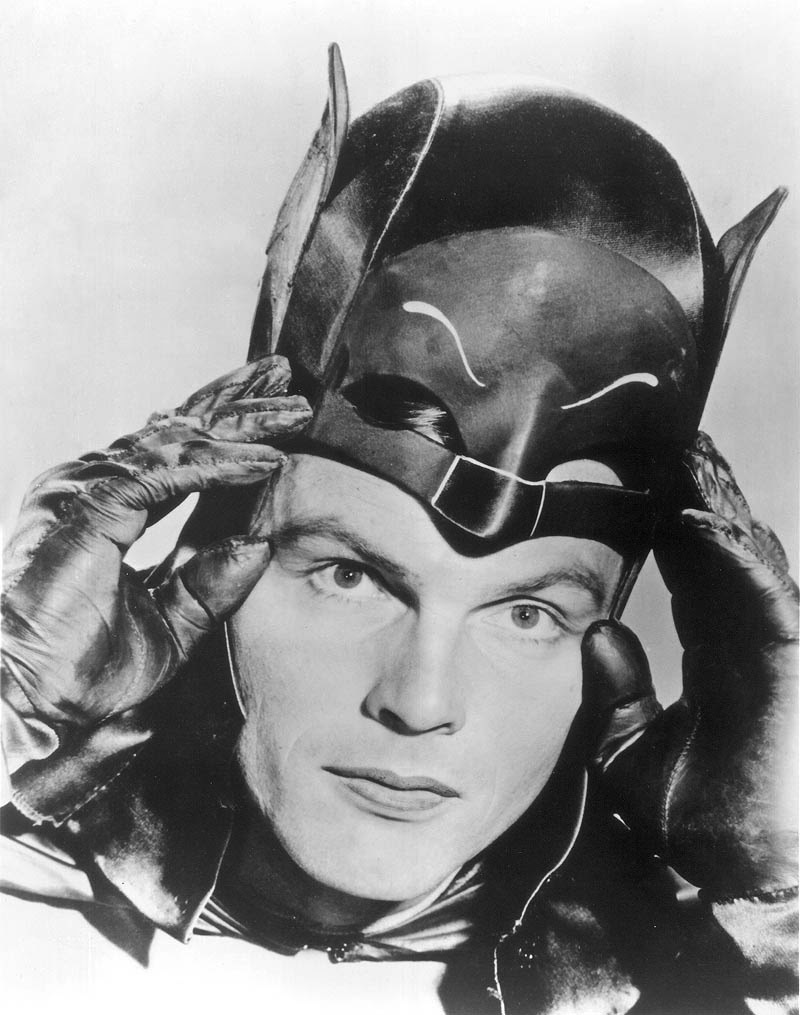 I haven't been purchasing much for myself lately as money has been pretty tight. However, I did have a Amazon gift card I got for Christmas had been saving for a rainy day.  As of late, I haven't had a whole lot to smile about, so I decided to rectify that and placed an order with Amazon. My order came a couple days ago and I started to giggle like The Riddler as I opened the box. 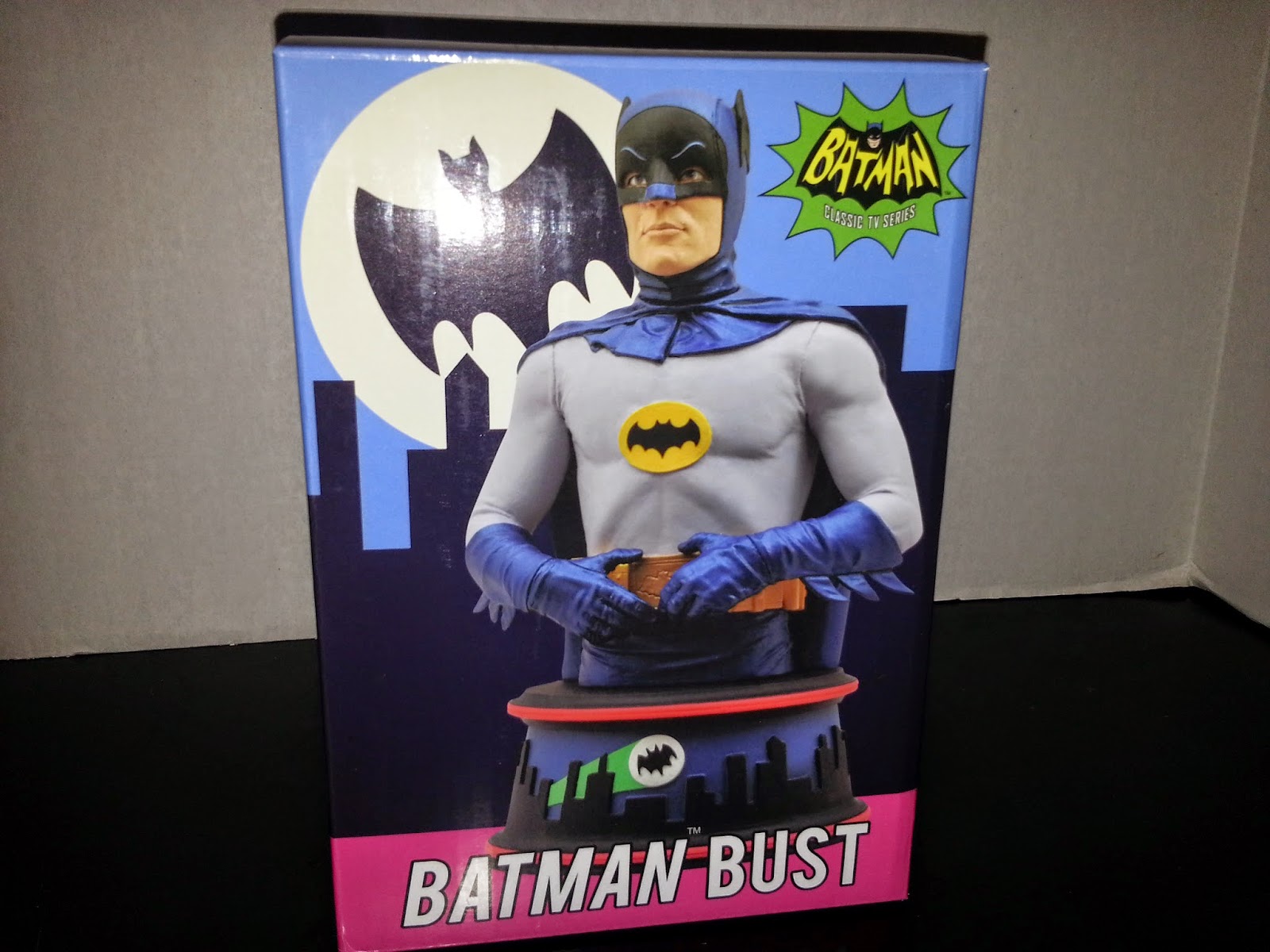 I finally decided to pull the trigger and picked up the Diamond Select 1966 Batman Bust and I am so thrilled to finally own this piece. It's my first Batman statue of any sort and I'm happy it's of my favorite Batman of all time.

As you can see, the front of the box has a great image of the statue you are getting as well as the 1966 Batman logo in the upper right hand corner and a great picture of the Bat Signal signing above a silhouette of Gotham City. The box alone was enough to get strange stirrings in my utility belt. 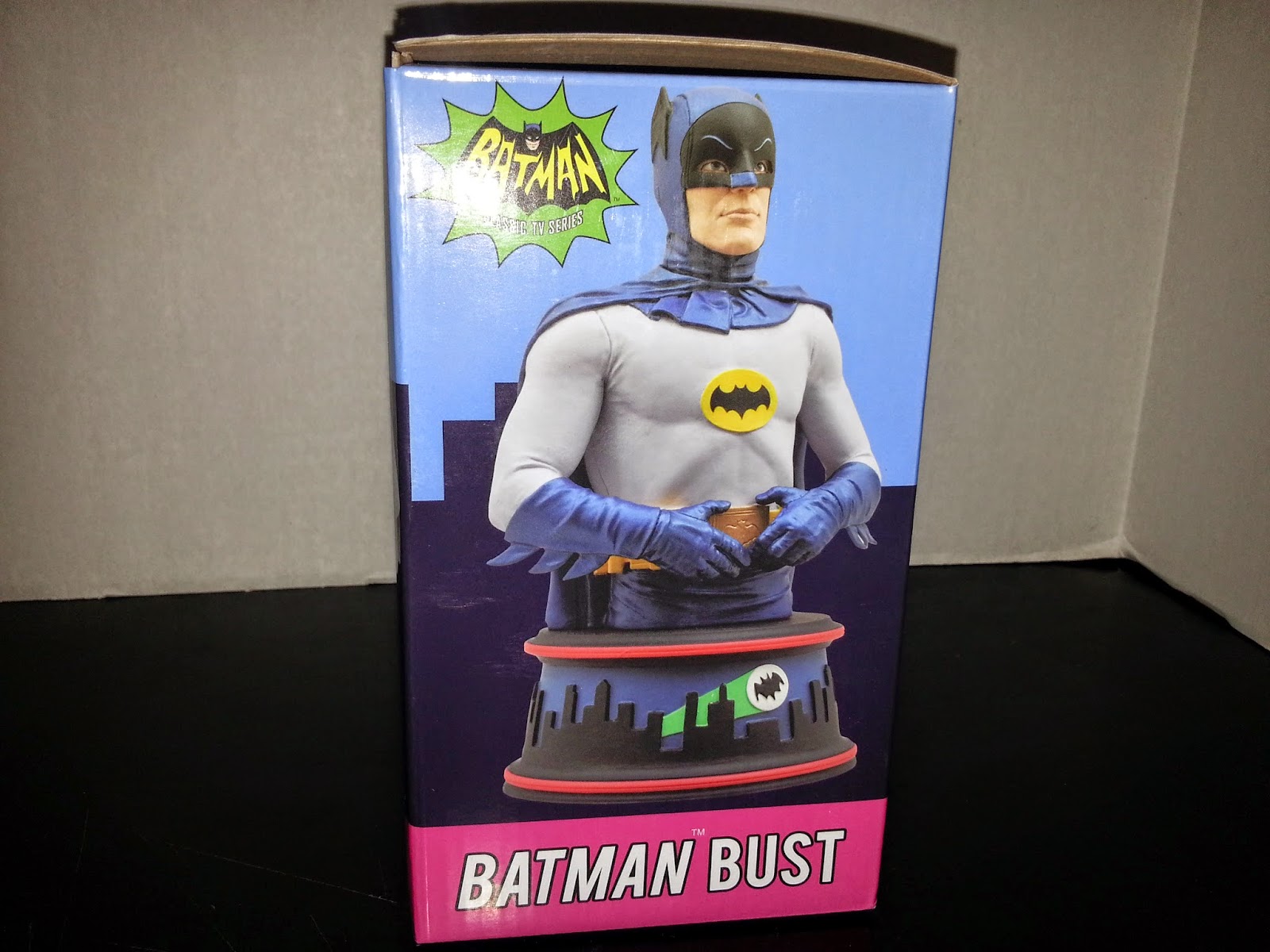 Both side panels of the box had just about the same image as the front did, sans Bat Signal. 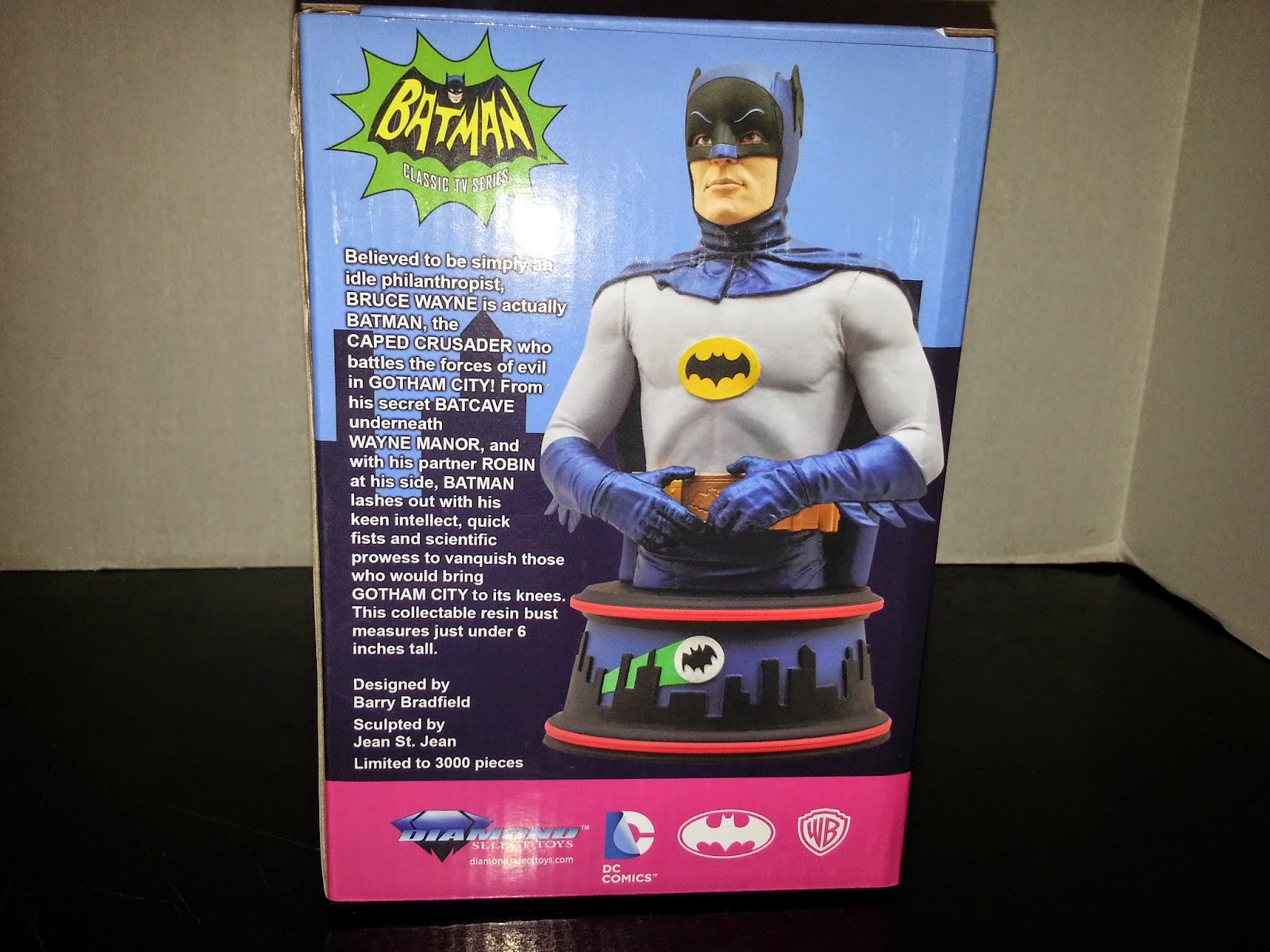 The back as the same imagery as the side did, except there is a brief write up about the Batman. If you don't know who the Batman is, please leave your address down in the comments below and I will have the geek police stop by and pick up your geek card. 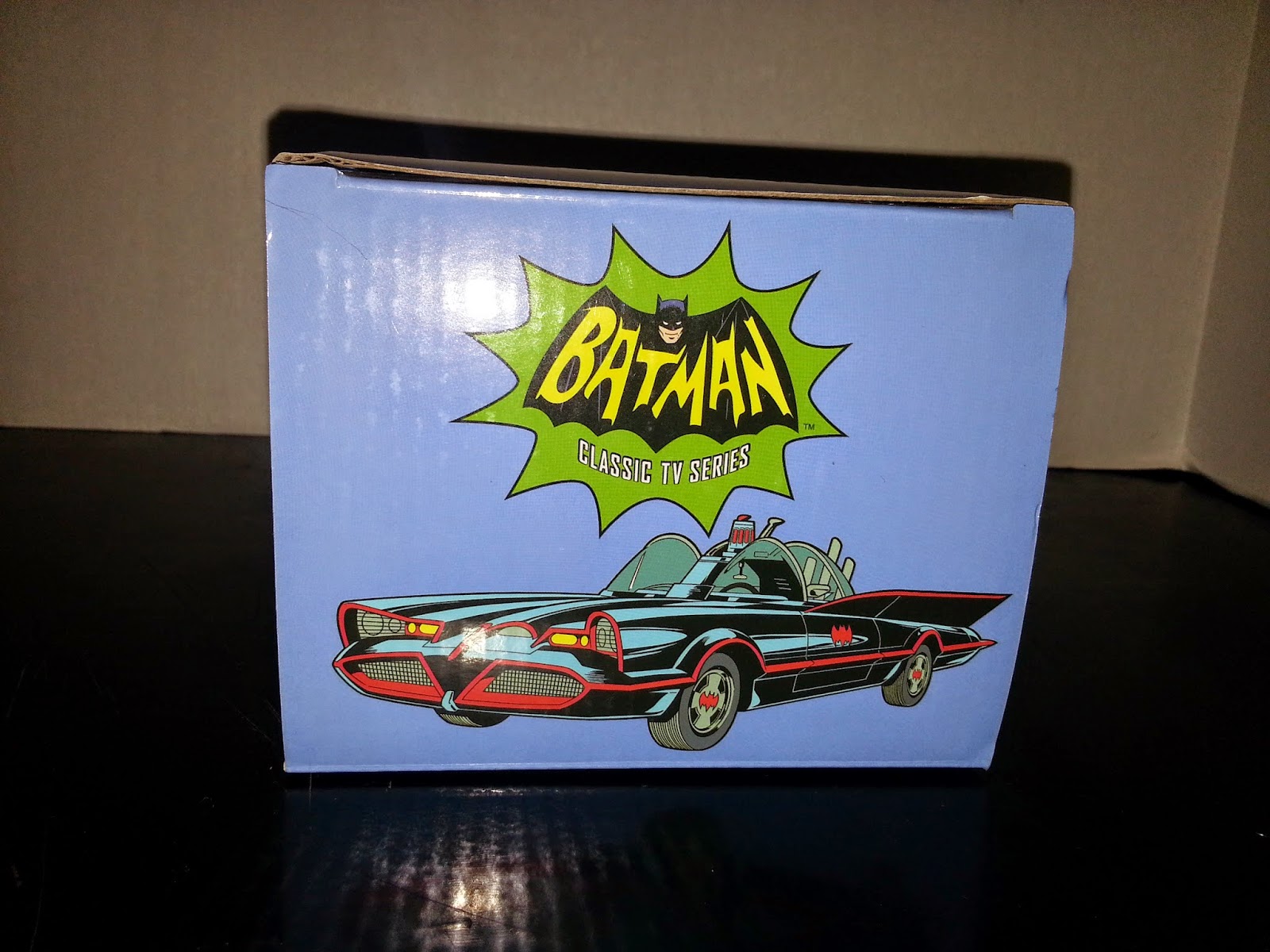 The top of the box features a nice artist rendition of my favorite car, the George Barris Batmobile. I swear, if I ever win the lottery, I will be having the guys at Fiberglass Freaks build me a Batmobile. 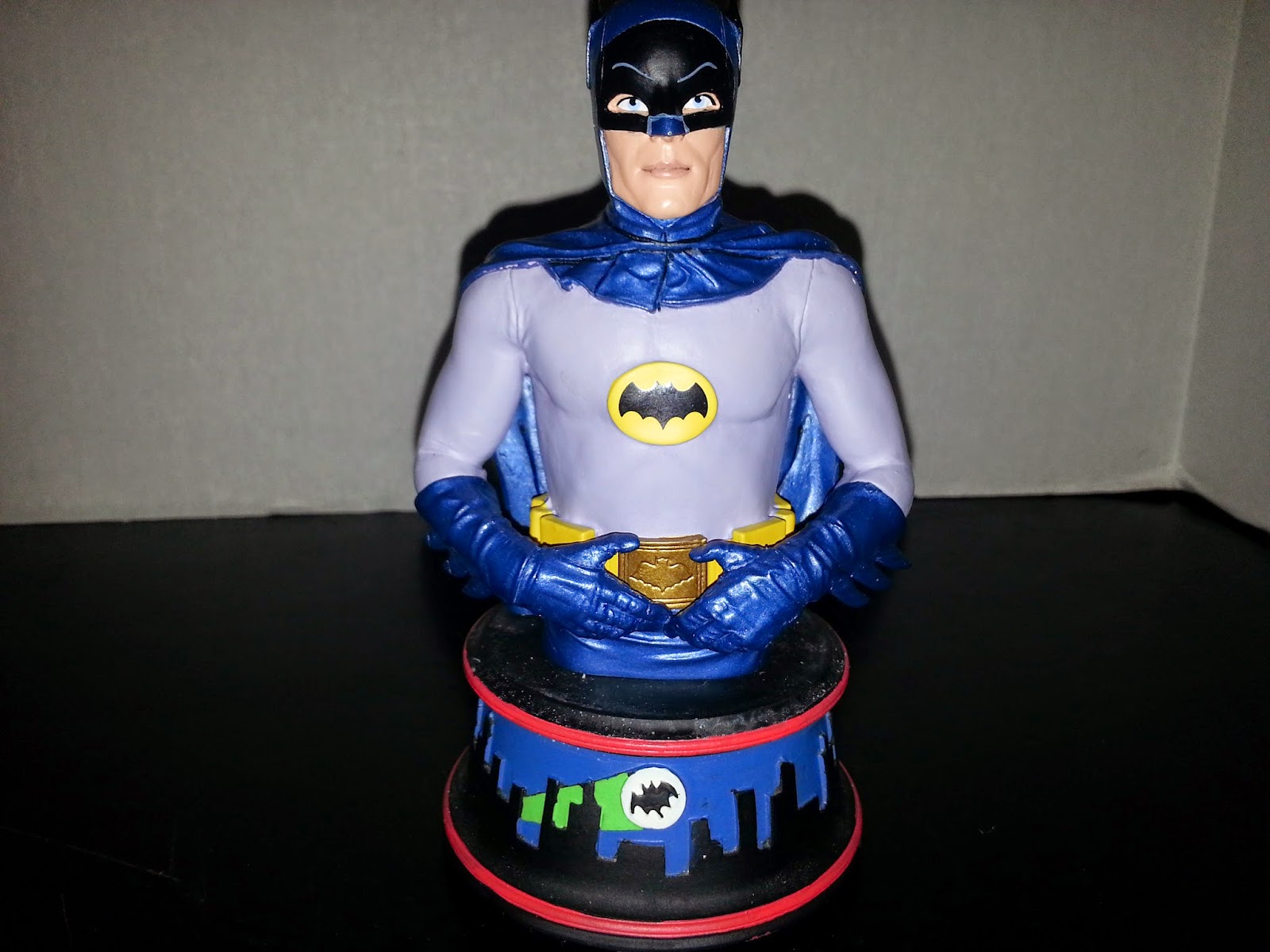 And here is the Piece De Resistance. When I took this out of the box, I was blown away with how good this bust looks. This is 6 inches of pure Adam West Sexiness. This bust was designed by Barry Bradfield and sculpted by Jean St. Jean and limited to 3,000 pieces. I am just amazed at how much this bust looks like the Adam West Batman. The facial features and body type are dead on to how Adam looked on the TV series. 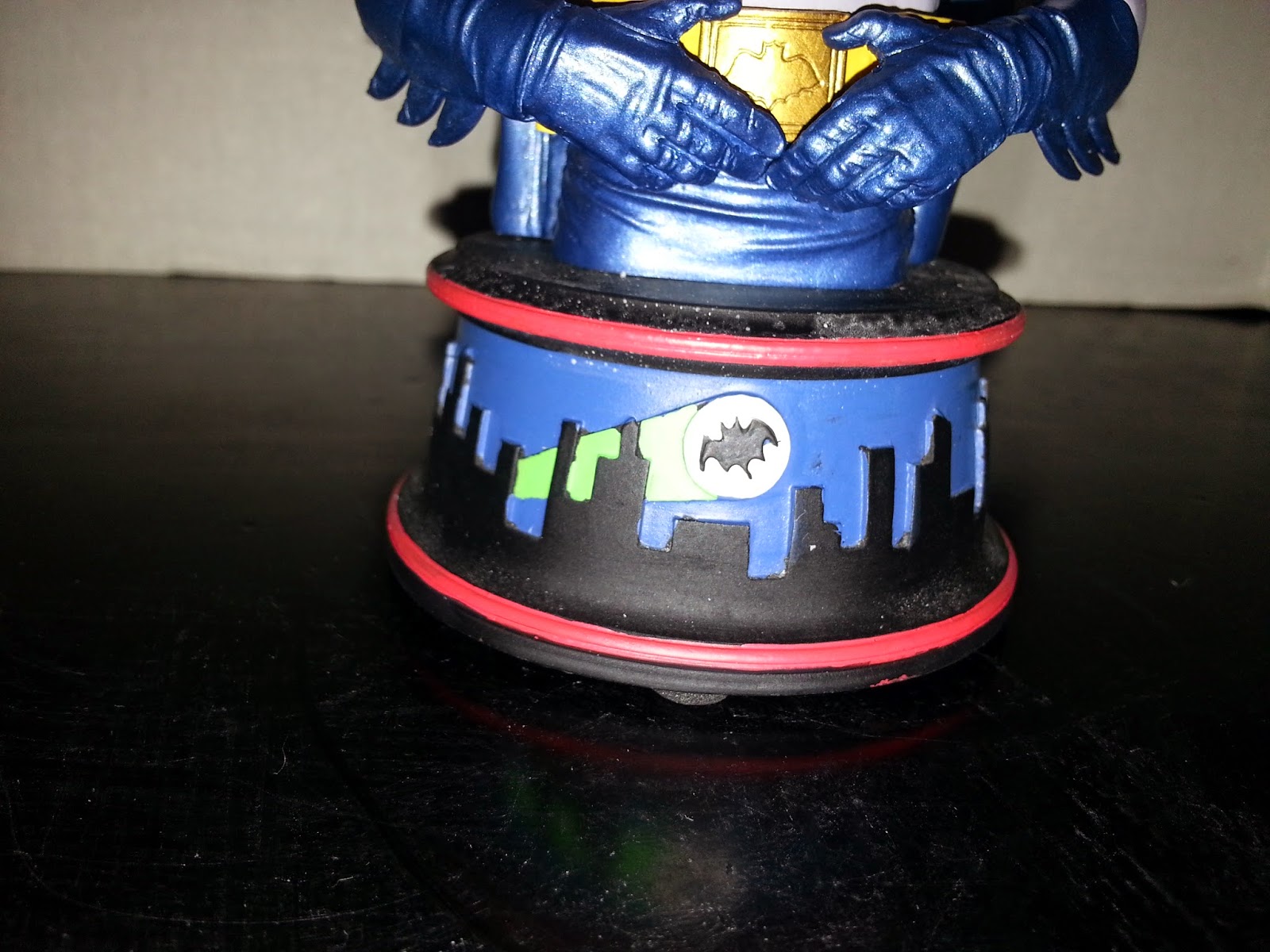 One of my favorite parts of this bust is the base. The base has been carved to depict the closing of the TV show. The shadows of Gotham City, the dark blue of the night sky as the Bat Signal cuts through it, alerting Batman and Robin that treachery is afoot and they are needed right away in Commissioner Gordon's office. The base is genius. 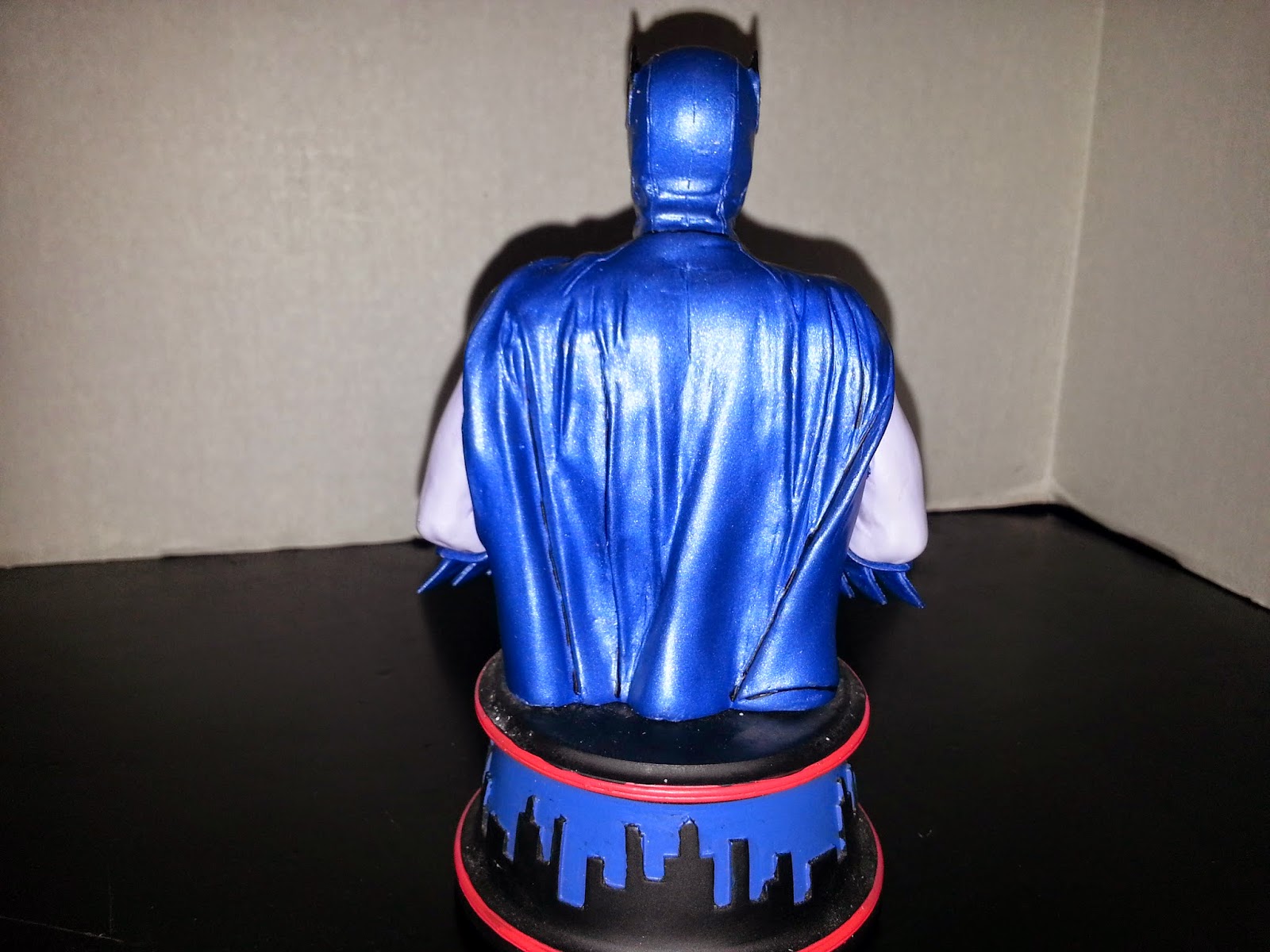 The back looks great. I love how the cape is scultped with folds and the paint is spot on. The colors are perfect to how they looked on the classic TV show. The base continues with more shadows of Gotham City in that dark blue sky. I'm glad they didn't stick another Bat Signal here. 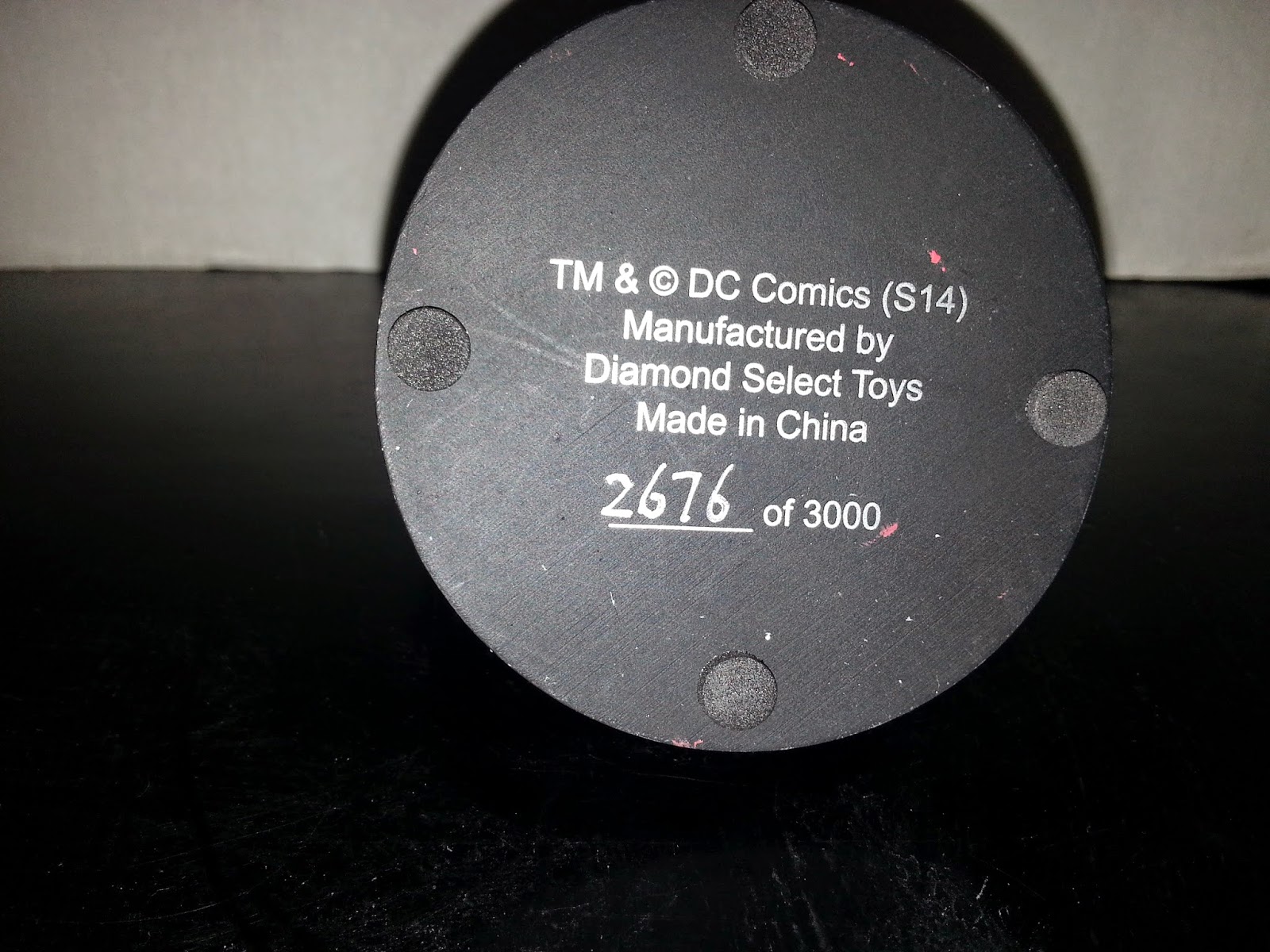 The bottom of the base gives you the trademark info as well as who and where the bust was manufactured. This base also gives you the number it is. Mine is a high number, 2,676 out of 3,000. I know a lot of collectors would rather have a low number in their collection. I'm just happy I was able to get this bust in my 1966 Batman collection. 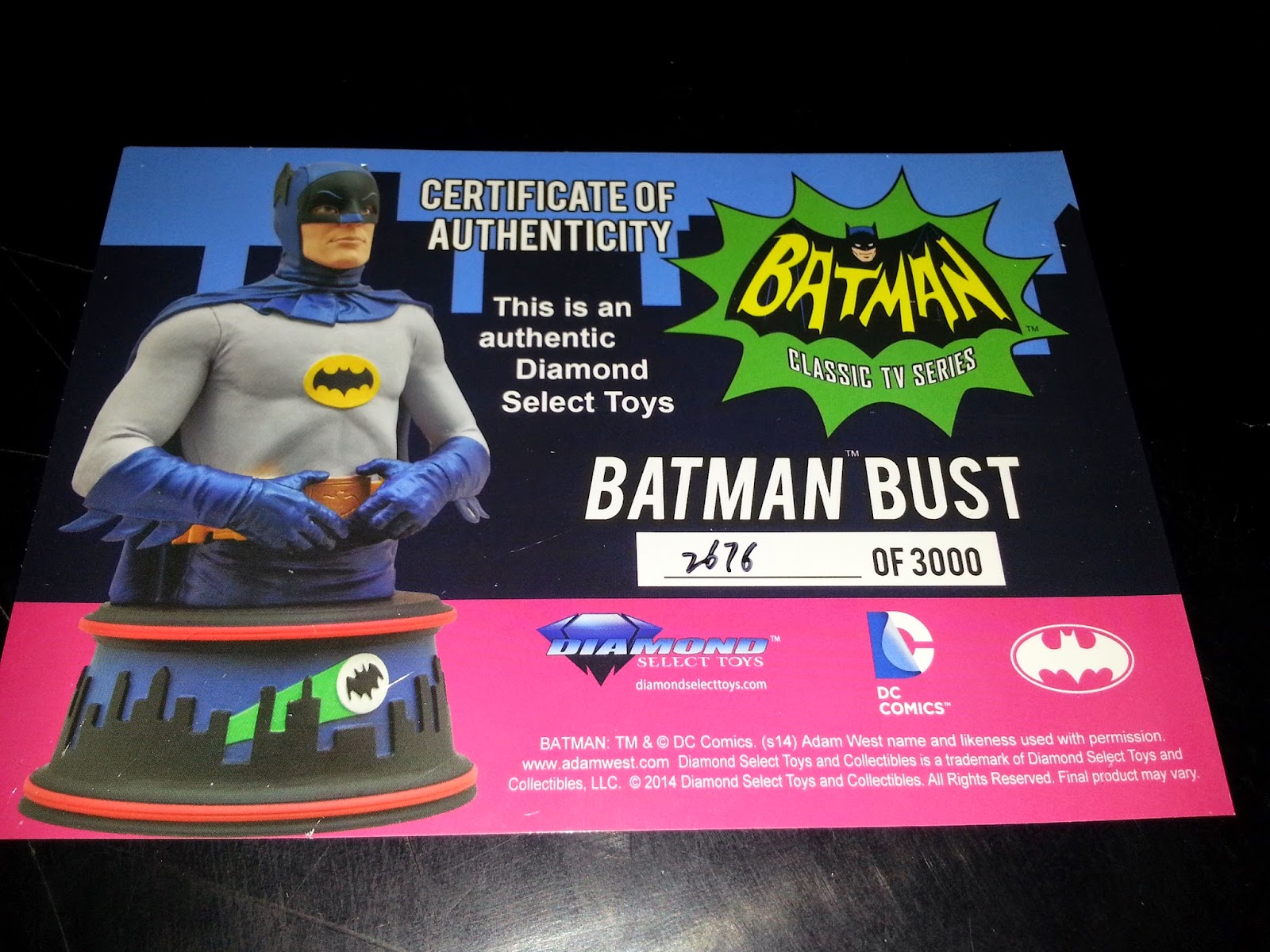 Plus, I get a Certificate Of Authenticity which tells you this is an authentic Diamond Select Toys Batman Bust. It shows off another picture of the bust as well as the numbering of the bust you have in your possession. 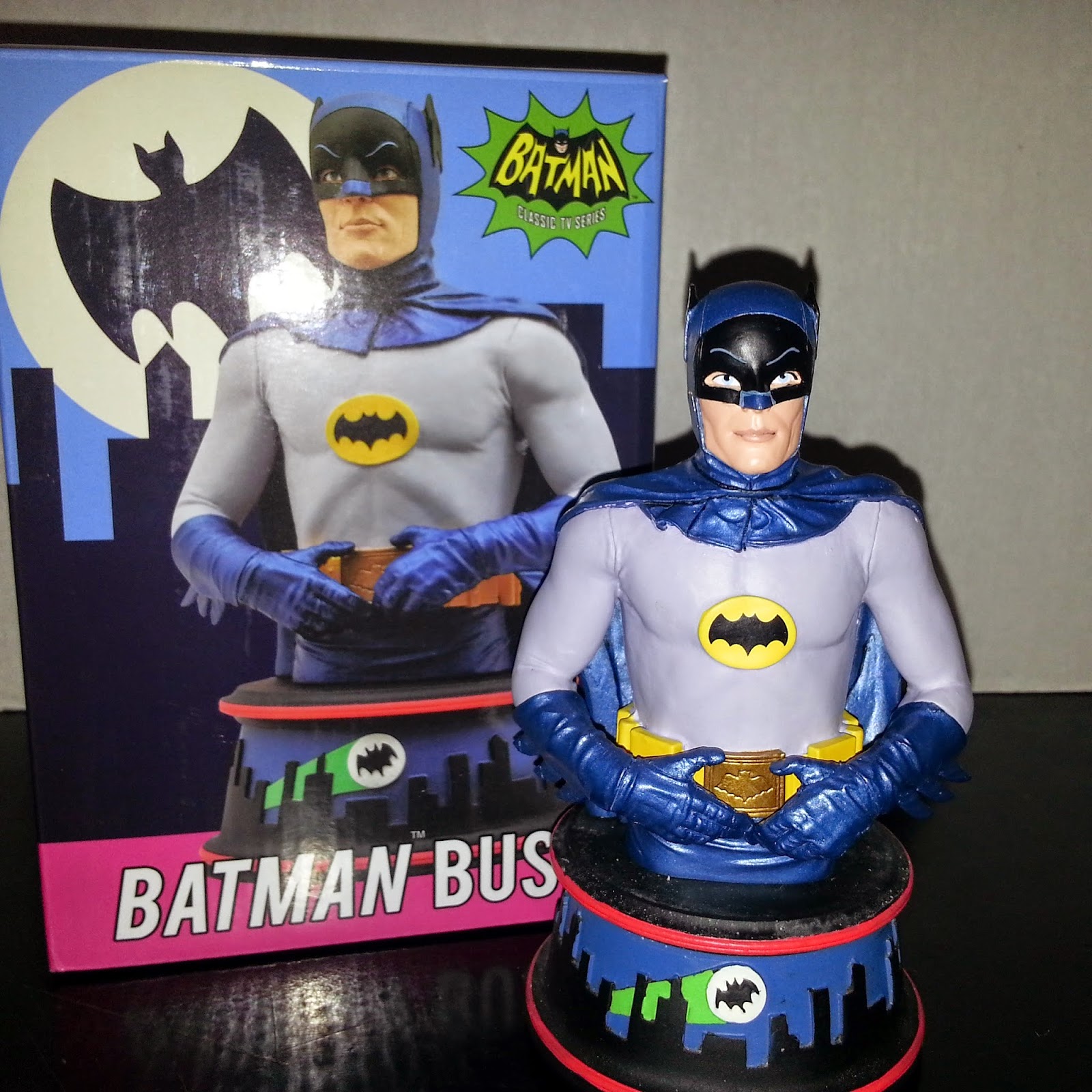 So, no doubt you practically read me drooling over this bust as I reviewed it. It's a fantastic piece and I'm so proud that I can own one. Do I recommend this? YES, YES, Oh HELL YEAH! OK, got my wrestling catch phrases in there as well. Not only do I recommend this piece to a fan of the TV show, but I would tell any Batman, pop culturist, comic book fan to race out and grab this piece before it is gone. Diamond Select has also released a Robin, Joker and Riddler and I plan to pick up all of them. I do hope we get a Batgirl and Catwoman soon as well.

This bust has bought me the same amount of joy I get whenever I get to watch the TV show. Yeah, I know it's campy and not the serious, emo Batman we are all used to, but this show celebrated how comics were at that point and I think we can be thankful Batman didn't go into outer space like he had in the comics earlier in the decade. I love the show and always will. This bust will become a featured piece in my collection for a long, long time.

And just because I feel generous, here is the greatest opening to a television show, ever!

Posted by Yankeejetsfan at 12:17 AM