As the holidays are almost upon us, I always look back on toys I either owned as a kid or always wanted to. Now that I am an adult (will never say grown up, cause we all know otherwise), I can always rebuy or finally add the items to my growing collection.

Over the course of the next several days, I will reveal some of the items on my wish list, by character, sport or whatever else I collect. Today, I will start by showing of the top 5 items on the character I collect the most: Spider-Man. These will be in no particular order. 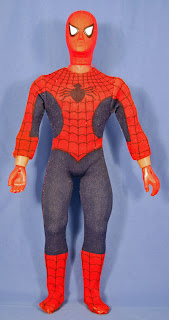 I'm a huge fan of the Mego "World's Greatest Superheroes" line, having had them as a kid and re-collecting them to this day. I own an 8 inch Spidey as well as the mini, plastic Spidey. I have never owned the 12 inch, either as a kid or adult, and I want one. This piece would look great on the Spidey shelf. The figure came with either a solid arm, or one that squirted "webbing", which was just water, I believe.
2-1966 Ideal Spider-Man Hand Puppet 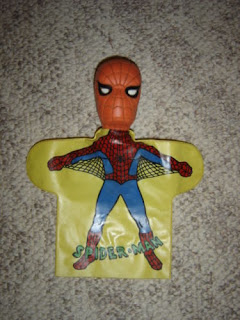 I have never seen one of these in person, yet I want one really, really bad. I have seen the Batman at a flea market earlier this year and came so close to buying it. It was real cool, but the head was held to the vinyl with a safety pin and that made me walk away. I will own it one day as well as this beauty. I'd probably rank it up their as a Holy Grail of mine. I do know it came either boxed or in a plastic bag. I have seen both in packaging on ebay for well over 100.00. If I saw a loose one, for a reasonable price, I'd be on it. 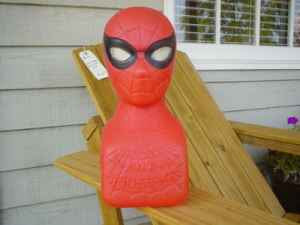 One of my very favorite things I had as a kid was this humongoid plastic bank of Spidey's head and torso. This was one of those pieces, and still is, that looks great on any shelf. As far as I know, only Spidey and Hulk were made, but I could be wrong about that. I had placed a bid on one on ebay, only to lose. Then I check my messages on ebay a few days later, only to find that I had a second chance offer that expired already. Gahhh! I will own this piece again. Oh, and good luck finding one without a hole in the bottom. These banks never had a spot to remove the change you put into it. D'Oh! 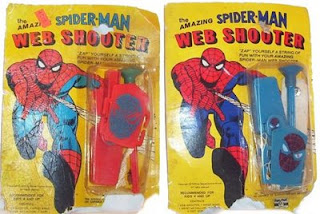 These babys are something I wanted sooooooo bad, but never got. I mean, what self respecting Spidey nut wouldnt want these to add to their collection.? But, alas, I never did get them. I even went as far as making my own out of construction paper. I was the only kid in Riverdale, NY running around with paper webshooters. Well, they went well with my homemade Spidey mask, so that's a good thing. The not so good thing? I never, ever see these on ebay. 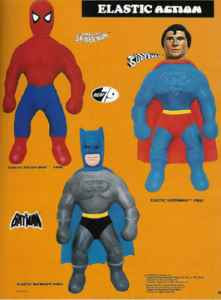 I hated my cousin. He had EVERYTHING I wanted as a kid. All the megos, all the Kenner Star Wars stuff, Sho-Gun Warriors, Godzilla, etc. He was very smug about who he allowed to play with them and always put a time limit on the play time. I always wished I had his toy box because included in there was all three Mego Stretch Arena superhero dolls, which were a jump on the Stretch Armstrong fad of the 70's. But then again, Batman and Spider-Man are so much cooler than some blonde dude who was made of jelly. Again, I never see these on ebay either.

Of all the Spidey stuff I want, and there are others. Like the Spidey Mobile Crime Lab and the Helicopter and the Mego car and the Energizer Figure that I want. Then again, if it has Spider-Man on it and it's affordable, I want it anyway.