Probably My Favorite Pick Up of 2011 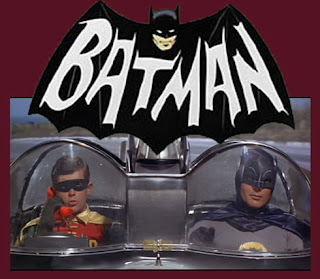 Anyone who knows me, knows that one of my all time favorite TV shows is the 1966 Batman series, Starring Adam West and Burt Ward. I'm not old enough to have watched the show during it's original run, but got the chance to see it on reruns here in New York City as a kid in the 70's. As a kid, I would run around in a blue towel with a Batman mask I made out of construction paper and rubber bands, fighting imaginary villians, screaming BAM! POW! ZAP! with each punch thrown (note to all, rubber bands hurt). And the Batman toys I got as a kid. Mego, AHI, Remco, and Corgi toys all filled my toy chest. God, I wish I still had them.

As an adult, I grew to love the show even more with it's campy humor and colorful villians and hilarious dialogue. Things like, "Some days, you just can't get rid of a bomb." or "Catwoman, you're not a nice person!" still crack me up to this day. A lot of ex-girlfriends never got my love for the series...which is why they are ex's.

When I started collecting, one of the things I wanted was a 12 inch Adam West Batman figure. None of the toy companies were making one and I had no talent to pull off one on my own. I certanly couldnt afford one of the customs people were churning out, so all I could do was drool over collector's Adam West figure.

One day, I recieved an email from someone over at 66batman.com, which is a message board that is all 1966 Batman. The gentleman let me know he had recently purchased an upgrade over the Adam West figure he has and was looking to sell the other. He asked if I was intrested in it. Was I?? Um, was Uma Thurman dreadful in Batman and Robin? (the answer is yes, dear reader) We worked out a deal and I received my Adam West Batman figure.

Take a look at this figure 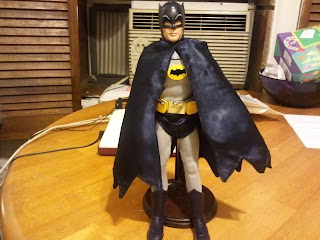 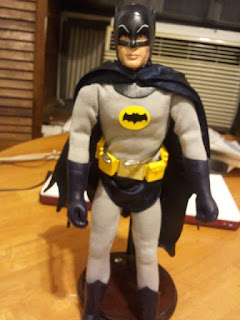 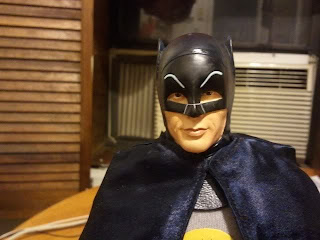 These pictures do not do the figure justice. The paint job is insane. The customizer used high end materials and the likeness to Adam West is uncanny. I am so pleased to have this figure in my Batman collection. Maybe one day, I can add a Burt Ward and some villians. This is definately the centerpiece to my Batman collection.