Restoration Projects: Are They Worth It? 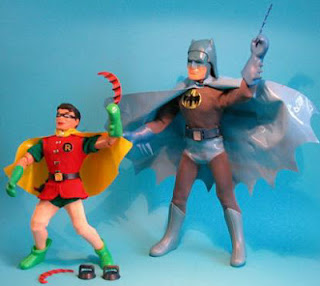 One of my holy grails is the 1966s Captain Action Batman figure. As any collector knows, this particular figure is a pretty expensive piece. Now, each time I see one on ebay, the drool I release almost short circuits my keyboard. It's dangerous for me to look at them on ebay. And God forbid I see one at a toy show. I become transfixed and my buddy George has to drag me away, usually kicking and screaming. It's an embarrassment to both he and I...mostly him.

Here is the problem my fellow geeks; I cannot afford this glorious piece. Like most of you, I have bills to pay and that's where the bulk of my dollars go. Whatever is left over is usually enough for work expenses and my leisure time as well as any purchases I make. Now, since I have vowed to concentrate on vintage pieces this year it should clear up some cash for the goodies such as this. Unless the modern piece is really cool or I can get it at a great price, I will more than likely pass on it.

Looking at prices for this on ebay over the past few months, I have noticed this usually finishes anywhere from 100.00-300.00. If I have a hankering for Raman noodles, I could probably swing 100.00. But those finish at that price few and far between. But while looking at the figures I noticed that sellers also sell the pieces to the figure separate, which gave me an idea.

What if I start picking up the pieces and just build the figure that way? Seems like a pretty good idea.I can add pieces when I get the money and over time I should have the figure I want. I actually got the idea for this from my buddy John over at the Batcave Toy Room, which you can read here: http://www.batcavetoyroom.com/  He restores Star Wars toys, so I thought maybe I can do the same thing with this Captain Action figure.

Then I start to notice a few things:

B-Some of the pieces are not in the best condition. I mean, that's expected with age. These pieces are 47 years old. You really can't expect mint condition, but some of these sellers sell the pieces in horrible shape and that's a shame. If I had customizing skills, I could probably work with it, but I don't. I failed finger painting in kindergarden.

So, going this route, I might actually pay more for the figure than one that is completed on ebay. By how much is the question. If I do thrifty shopping, maybe I can find the pieces at a good price, but there's no guarantee that will happen. I'm sure other collectors will have the same idea (especially after reading this, lol).

Knowing this, I wonder if restoring a vintage toy like this is the way to go. I think it could be. You have the thrill of the chase when looking for the accessories and pieces needed for the figure. Then there is the satisfaction of a completed figure in your collection. Hard work always pays off, right?

So, I guess the answer to that is really up to the person buying. Would you rather pay the money to have a completed figure or spend time and possibly more money to build the figure yourself with pieces you find on ebay and take the time to make sure the figure looks as good as you want it. Either way, you'll end up with a vintage figure that will look awesome on a shelf.
Posted by Yankeejetsfan at 11:33 PM