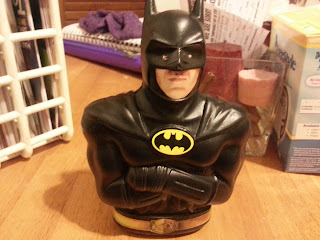 Along with the Mego Batman bank I picked up, the seller had doubled the auction by adding this bank which was given out with the Batman cereal back when Tim Burton's Batman was released back in 1989. I wasn't really looking to add this bank to my Batman collection, but since I had the chance to add 2 vintage Batman banks to my collection I threw in a bid and won for a lot lower than I expected, which is always a good thing.

For those who don't remember the cereal (and if your my age or close to it, how can you not?) The cereal was put out by Ralston as a tie in to the movie. It came with the bank shrink wrapped to the box. 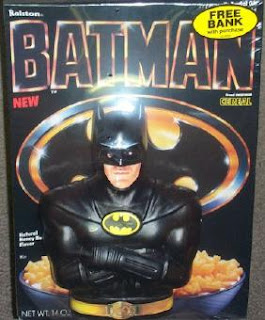 As for the cereal it's self, It seems like the makers decided to just take Cap'n Crunch and make them bat shaped. I remember my mom, knowing I was bat crazy, bought me the cereal. Had she bought me the one that had the bank, I wouldn't have had to pick it up on ebay. But that's another story for another time.

And here's the cereal 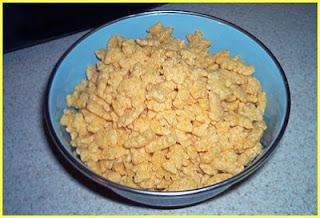 And remember kids, no topical oils were added to this... or originality for that matter.

Ok, enough about the cereal. It's been long eaten and digested. Let's talk about this bank. Looking at it, the first thing I notice is the face is a sticker. I'm not too sure that it's a sticker of Michael Keaton either. Plus, his eyes seem to be crossed. Now, I know Batman could not turn his head in the outfit. Maybe he felt if he crossed his eyes he could see from both directions, negating the need to turn his head. 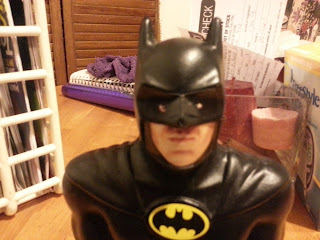 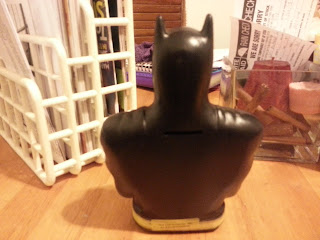 Here is the back of the bank. the coin slot is located in the middle of his shoulders. This is a smaller bank than the Mego one, so this wouldn't have held a lot of coins. 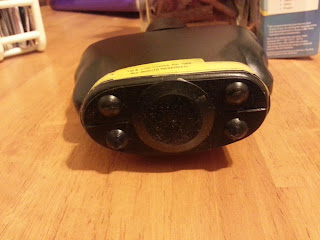 The bottom of the bank. This bank was solid plastic. There was no way of getting your change out. Much like my vintage Spider-Man bank, I'm guessing you would have had to cut a hole somewhere on this bad boy to get your money out. This bank had no holes, so I was able to get a nice solid piece for my collection.

Overall, the bank's face might be a bit weird looking, but I am happy to have it for my collection. I have some of the vehicles from the movie as well as a figure or 2 so I am starting to amass a small Batman movie collection.  Or, if I wanted, I could pick up this cool Batman bust/bank I saw at Chameleon Cards And Comics today so I could have a trifecta of Batman banks. Either way, this was a unique addition to my Batman collection and even though I was really after that Mego bank, I am very glad to have this bank.
Posted by Yankeejetsfan at 11:24 PM