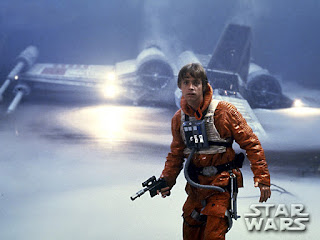 I haven't had the chance to add anything new to my Luke Skywalker collection lately as I have been concentrating more on my Batman collection. This past weekend, I ran into 2 Skywalker items in different places. I wasn't even shopping for any Luke stuff, but when I saw them I knew I had to have them.

I was in Target shopping for household items when I decided to take a stroll into the toy section. I was actually looking for the Brave And The Bold Justice League Batman figure, but that was sold out. The superhero section in my Target is always a mess. I looked through the discarded figures, in case there was a Batman in there. When I found none, I turned to leave. My eye caught this Star Wars Vintage Return Of The Jedi Luke Skywaker Lightsaber Construction figure, which was from a deleted scene in the Star Wars Blu Ray. I have yet to see this scene, but it didn't stop me from grabbing it and sticking it in my cart. 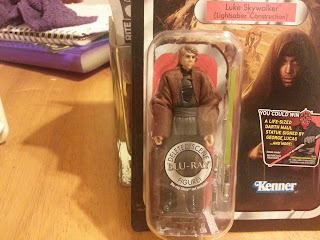 Closer look at the figure and you can see he's wearing the cloak he wore when he entered Jaba's palace along with the very cool green lightsaber. I am assuming this deleted scene was before he went to rescue Han Solo as he already had the lightsaber when he was on the barge, fighting Jaba's henchmen and Boba Fett. Very nice piece to add to the Skywalker collection, if I do say so myself. 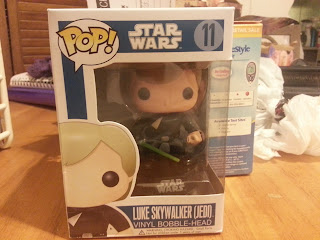 I love Funko's Pop figures. When I saw this figure while hanging out with my friends at Manhattan Comics, it was a no doubter that this was coming home with me. I have been looking for this figure for a while now and it was the first time I had seen it. 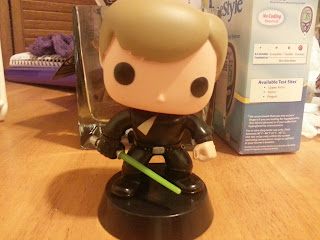 This figure is so cool, Another Return Of The Jedi Luke, this one has him in his all black outfit that he wore in that epic scene where he fought Darth Vader as the Emperor watched. Again, he has that green lightsaber and has his collar casually flipped down as if to say "Vader? I got this." 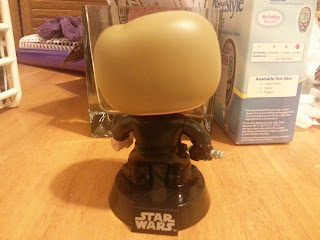 I think it's a bit weird that the Star Wars logo is on the back rather than the front. Unless I had it backwards. The figure is not glued to the base. It can be removed and put back on. So, I am guessing I screwed up when I took it out the package and put him on wrong. Figures.

I grabbed this Luke Skywalker POP because I know i had I not I would never see it again. I one time saw the POP X-Wing Fighter Luke figure and didn't grab it and I have not seen it since. My buddy thought I was insane, but I convinced both he and I that I will see it again and grab it then. Now who's the idiot? Will probably have to go through eBay for it unless I see it at the 2 comic/toy conventions I'm hitting in April. Cross your fingers.

I'm very glad I picked up both of these pieces for my Luke Skywalker collection. I do have a Skywalker wish list and although neither one of these beauties are not on the list, I'm glad I own them. I now feel one with The Force. I will never turn to the Dark Side as long as I have Luke watching out for me. Unless they have cookies. I hear the Dark Side has cookies. Then my failure will be complete.
Posted by Yankeejetsfan at 11:41 PM