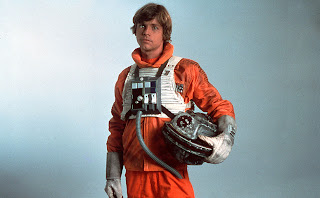 You would think that living in NYC would make my toy hunting for the new figures easy. I live in one of the biggest cities in all the world. There are stores galore here. We have Toys R Us, Target, Kmart, Walmart (Outside of the city, of course), Cosco, Sam's Club, to name a few. Not to mention a few comic book stores and a few smaller shops that sell toys and other products that would appeal to a geeky SOB such as myself.

But, that doesn't make finding such cool items any easier.

I have also been looking looking for the new Luke Skywalker Star Wars Black Series 6 inch figure to add to my Skywalker collection and again, was coming up short. I found Darth Maul, R2D2, and the Sandtrooper pretty easily,  but no Luke. 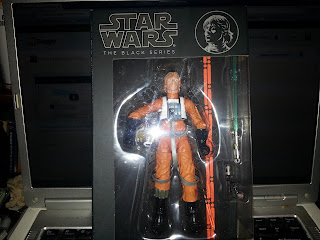 I love the packaging. Luke came in a black box (hence the name, Black Series, duh!) with Star Wars in lighter black lettering, outlined in silver. A dark drawing of Luke is off to the right of the lettering, enclosed in a circle. The box hs a huge window front showing off the figure and accessories. Underneth, there is Luke's name in red lettering. 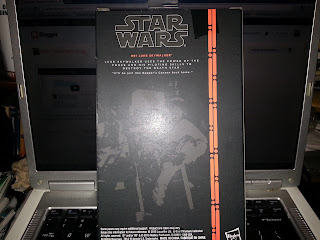 Here's the back of the box. There is a silhouette of Luke, about to climb into his X-Wing Fighter. Above that is some info about the character, a quote from the movie as well as Star Wars in that off black lettering we saw on the front of the box and Luke Skywalker in red lettering under with what I assume to be the numbering of his place in the series, which is number 1. 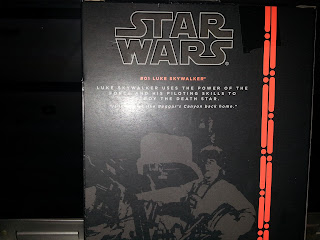 Here's a close up of the back of the box. 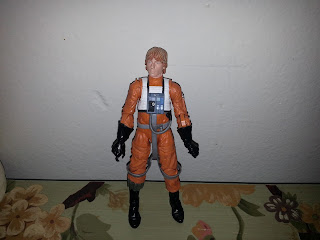 And Luke is out of the box.

Right off the bat, I am very impressed with the detailing of this figure and how sturdy it feels in the hand. But, as with a lot of newer figures, it is having trouble standing up on his own, so I had to prop him up against the wall.

You've been at that Canteen on Tattooine again, haven't you? 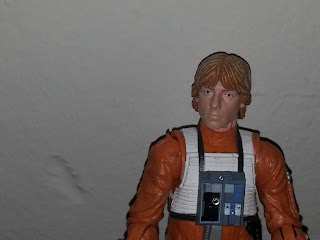 I think this figure bares a pretty good likeness to Mark Hamill. Probably one of the very best likeness I have seen on a figure that is not Hot Toys or anything higher end. I like the streaks in the hair to accentuate the hair color. He comes with his little mole on his face. Oh, and the head pops off if you ever wanted to switch heads with Darth Maul, you can. 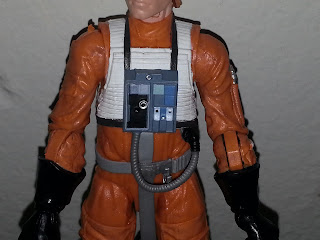 Love the detail on Luke's chest rig. I know some reviews I read had mentioned that the chest rig  was painted sloppy, but I am happy to report that mine was done well, with no excess on it. Actually, the paint job on this figure is done very well. 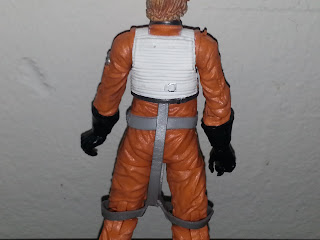 Channeling my inner Schumaker to show off some Skywalker butt. Actually, I wanted to show off the detailing of the uniform. Love the wrinkles. Hasbro made this figure to look like Luke's been hanging out in it for a while. Great detailing. 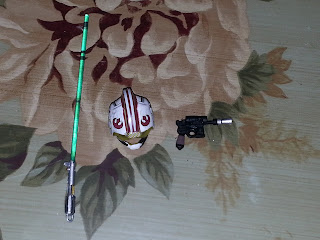 Luke came with some accessories. His lightsaber, a helmet and a blaster. All are made of a rubbery plastic material, which is kind of cool. I just don't know how durable the accessories are. 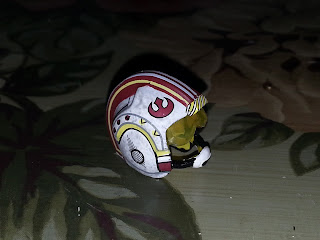 That helmet is awesome looking. The detailing on it is fantastic. The rebel markings on it just pop out at you and the helmet was also painted to look really dirty. You can tell it's been in a war. 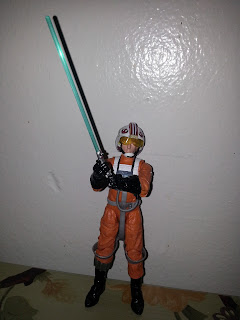 The lightsaber is a nice size. Looks like he can slice your arm off from about half a mile away. The blade comes off and you can hook the handle to his belt. 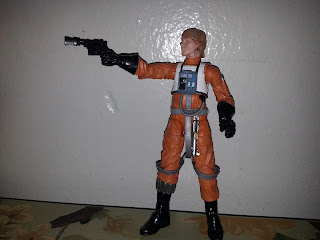 This figure is pretty articulated. It has a ball joint head, swivel/hinged shoulders, elbows, wrists, ankles and hips; a hinged neck, ball joint torso, double jointed knees, swivel at the top of the boots.

The one problem I have is finding a position to keep Luke upright. Since there are so many points of articulation, there are so many different poses to have Luke stand in. It just takes time to find that right pose to keep Luke in fighting shape. I did notice that there was holes in the bottom of his boots so I may find a stand for him to stand on.

I have to admit, I love this figure. It's easily became one of my favorites in my collection. I love that it's 6 inches rather than the smaller 3 inch figures we are used to seeing. Some collectors were complaining about the choice of outfit they have Luke in. If it was up to me, I might had him in his Bespin outfit, but I am quite ok with the X-Wing Fighter outfit.

Guys, if you like, no scratch that, LOVE Star Wars, then you have to find a way to add this figure to your collection. The price point is a bit pricey. In most places, you can get him for 19.99. I paid 22.99, plus tax because I had to buy him in Toys R Us in Times Square, the middle of tourist central, so I had to pay a little more for mine. But, even then, I think it's worth it. I doubt you will find a better Luke Skywalker figure on the market.
Posted by Yankeejetsfan at 12:30 AM