When the announcement came that we would be getting 1966 Batman goodies, I never thought that bobble-heads would be among the stuff that is being made available. Then I saw the mock ups for some of the bobbles and I got really excited. When I saw the pictures, I knew I would be adding these to my Batman collection. 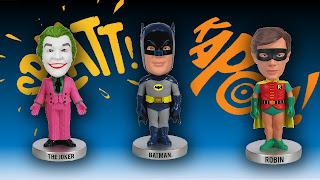 Wacky Wobblers released a set of bobble-heads featuring Batman, Robin, Joker and Catwoman, who is not pictured. I love the look of these bobble-head figures. Not too silly looking as some bobble-heads tend to be. I had heard these were already out in stores, but I haven't had any luck in finding them.

As you can see, there is also a contaminated cowl Batman from a Mad Hatter episode. This one is a hard one to find. If you do find one for retail, go play Powerball. 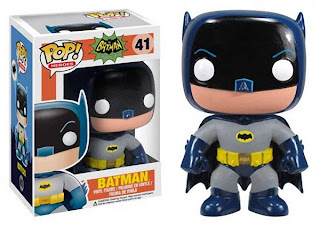 I have stated my unmitigated affections for POP Vinyl figures on many an occasion. When I heard POP was releasing a set, I knew I would be getting them. I just never imagined how cool these would look. This figure looks fantastic and I cannot wait to get my hands on them. They won't be released until October so I will have to wait a while. 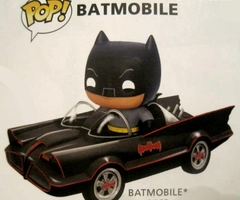 Of course, I will be picking up the Batman/Batmobile combo as well. Not sure if this is the final product or just a prototype. I guess we will find out come October. 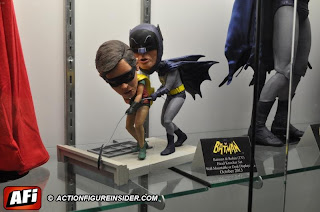 Big thanks to AFI for releasing pictures of this double bobble-head of Batman and Robin, climbing up the side of a building. This bobble-head set can be displayed on a shelf, flat like above or can be hung up on a wall, which would look pretty cool. This will also be released in October so for now I will just have drool all over my keyboard until it's release.

Would you guys believe I do not have a Batman bobble-head in my collection? Even I find that amazing and sad. I need to rectify that ASAP. I have seen some pretty sweet Batman bobble-heads, like the one from the Dark Knight and the blue suit DC Direct Batman. Those 2, along with the ones shown above pretty much guarantee a bad ass Batman bobble-head collection.
Posted by Yankeejetsfan at 1:03 AM