Cross Another One Off The Checklist 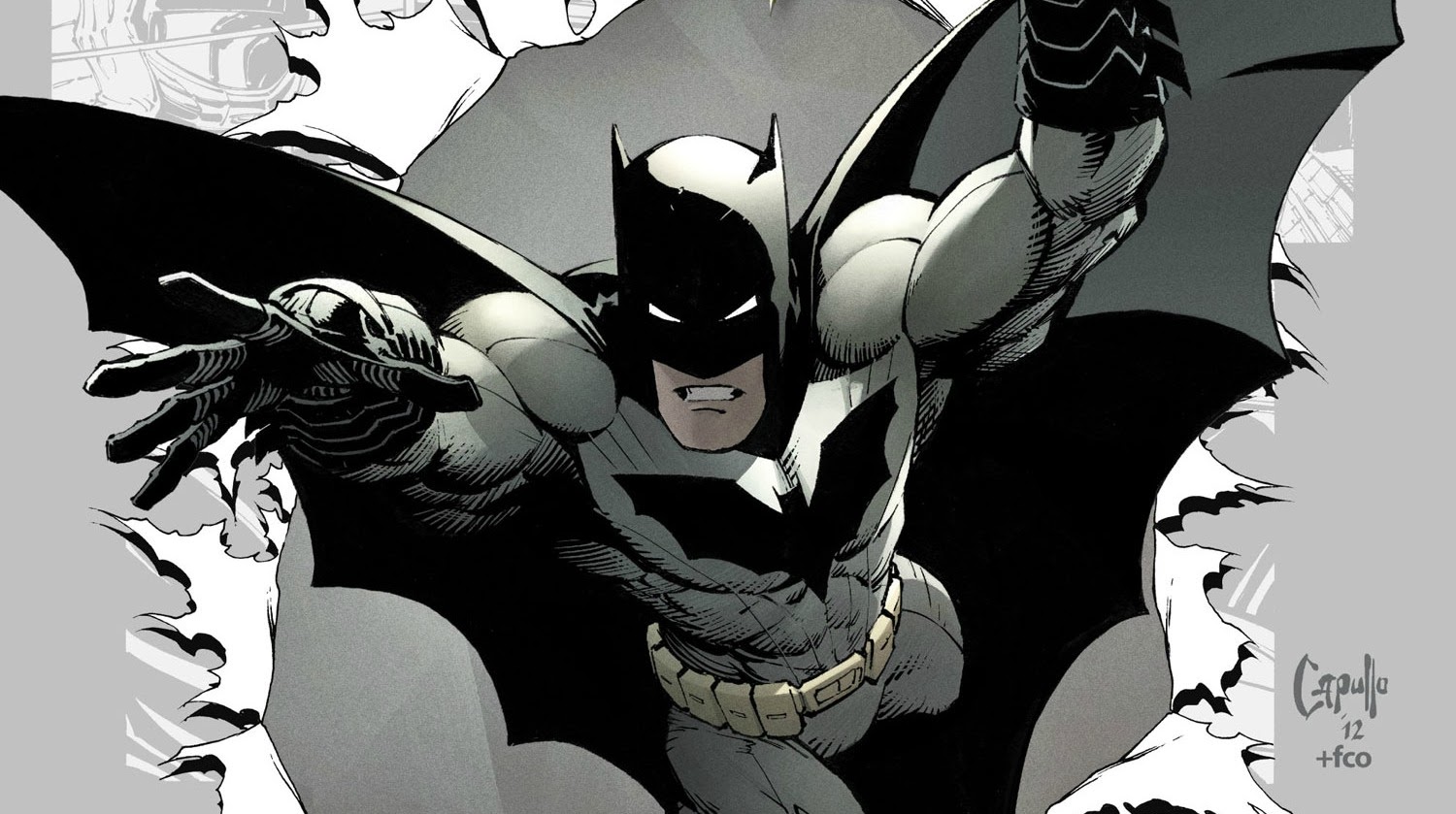 In terms of acquiring new items for my various collections, 2013 was a solid year for yours truly. I managed to knock off a few items I had on my must have lists, vintage and contemporary. I made a promise to myself that 2014 would be more of the same. I still have my checklists for things I would like to add to my various collections. With all the conventions, flea markets and shows I try to attend, I hope to make a huge dent on those checklists.

Back in July, I posted a blog about the top 5 Batman figures I wanted to pick up for my Batman collection.I was able to cross off the DC Direct Super Friends Batman figure and thanks to a gift card my sister got for me as a Christmas gift, I was able to knock another off that list and it's a figure I have been wanting for a while now. 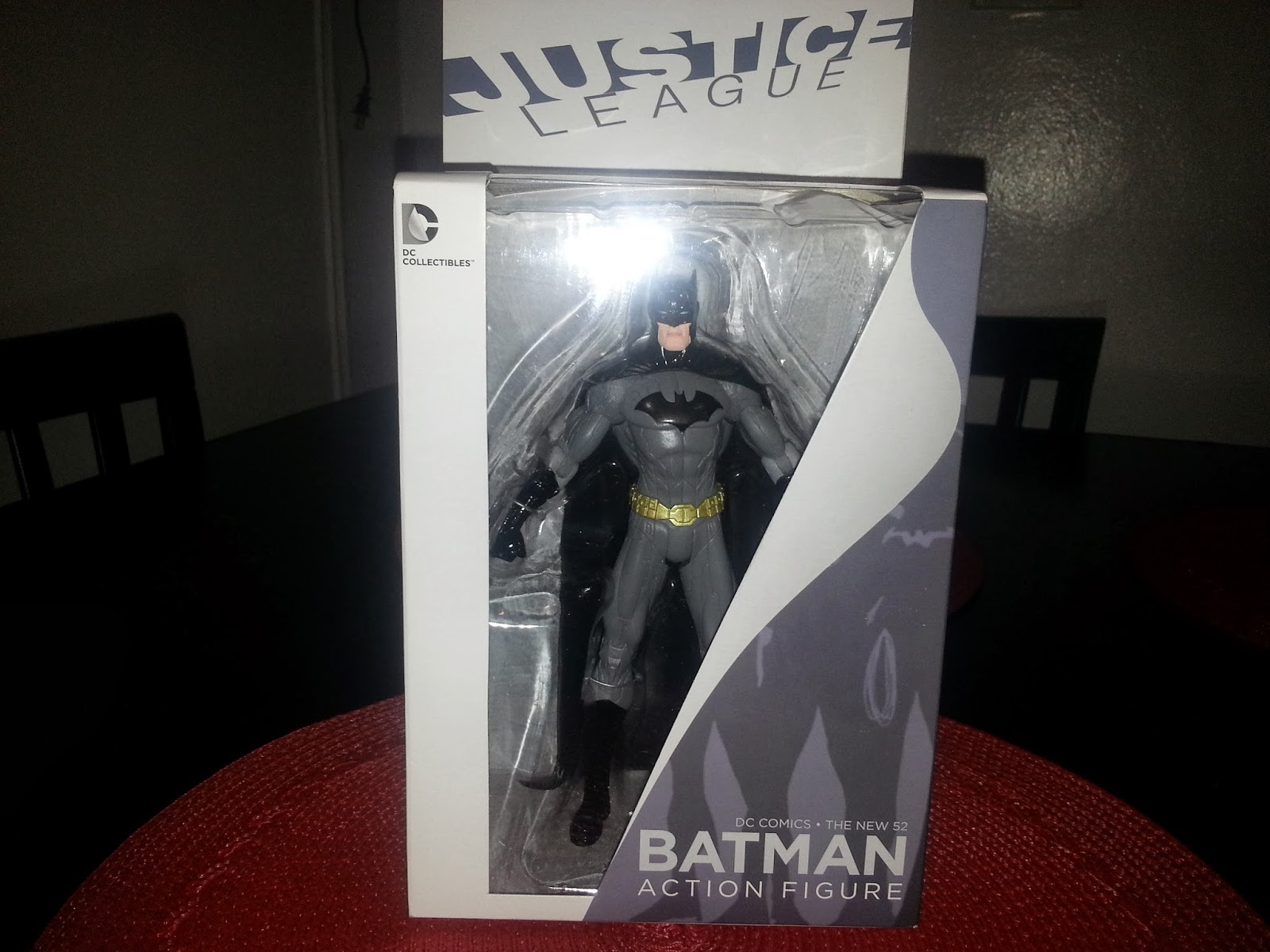 I finally have the DC Collectibles New 52 Batman figure and It's such a cool looking figure. I have read a few of the New 52 titles. I've read the first arcs of The Justice League, Superman and The Flash, but for my money, the best title in the DC Universe is the Batman book. I enjoyed the Court Of Owls Vol 1 and The Death Of The Family so much. When I saw that Batman would be made into a figure, I knew I had to have him.

When I picked up the figure, the first thing I noticed was the front of the box. I liked that it looked like a comic page being turned to revel the figure behind it. Whoever designed the box should be given points for originality. 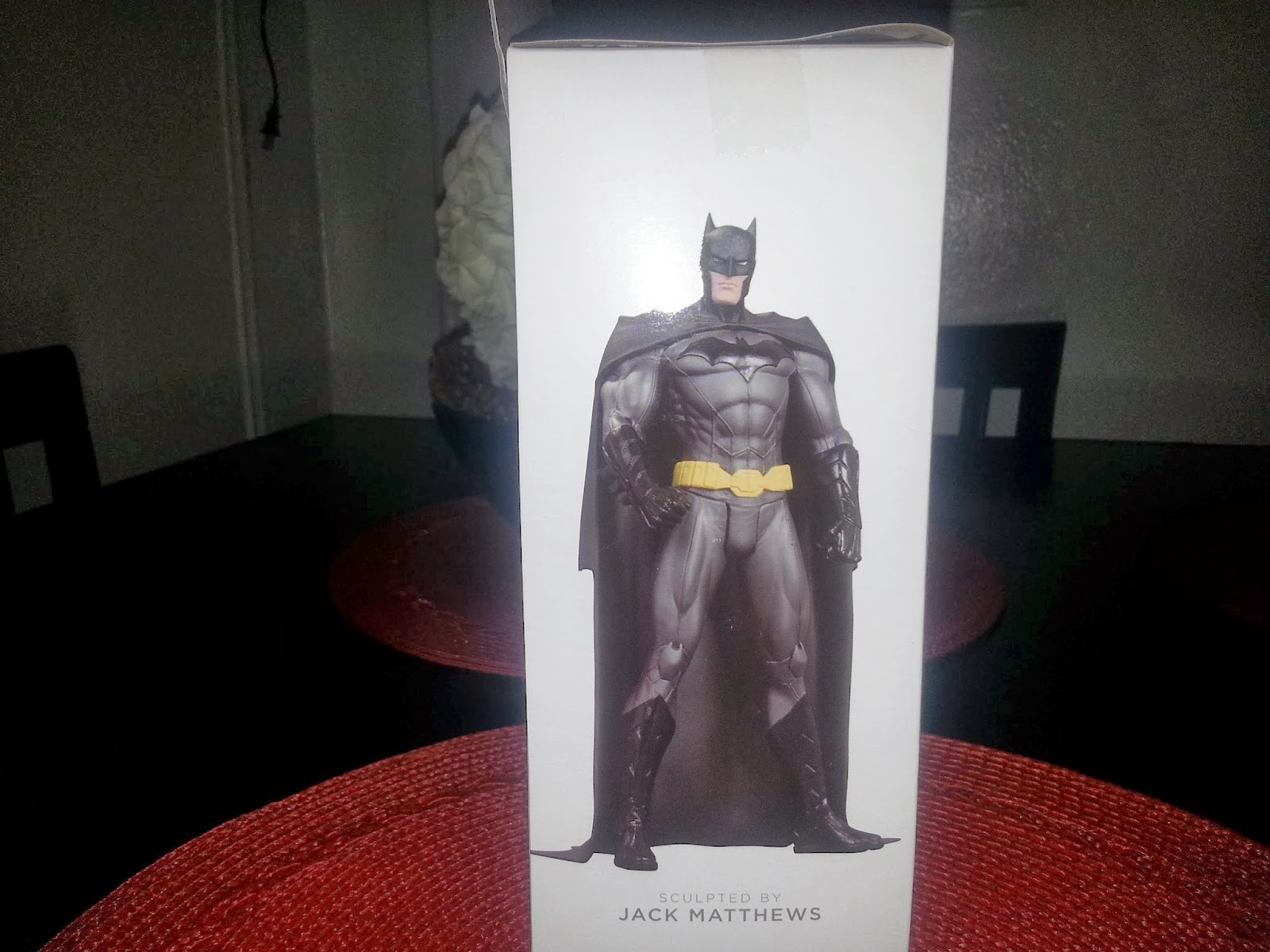 On one side of the box shows a picture of the figure that was purchased, which is based on the art of Jim Lee. It also gives props to the designer of the figure, in this case is Jack Matthews. 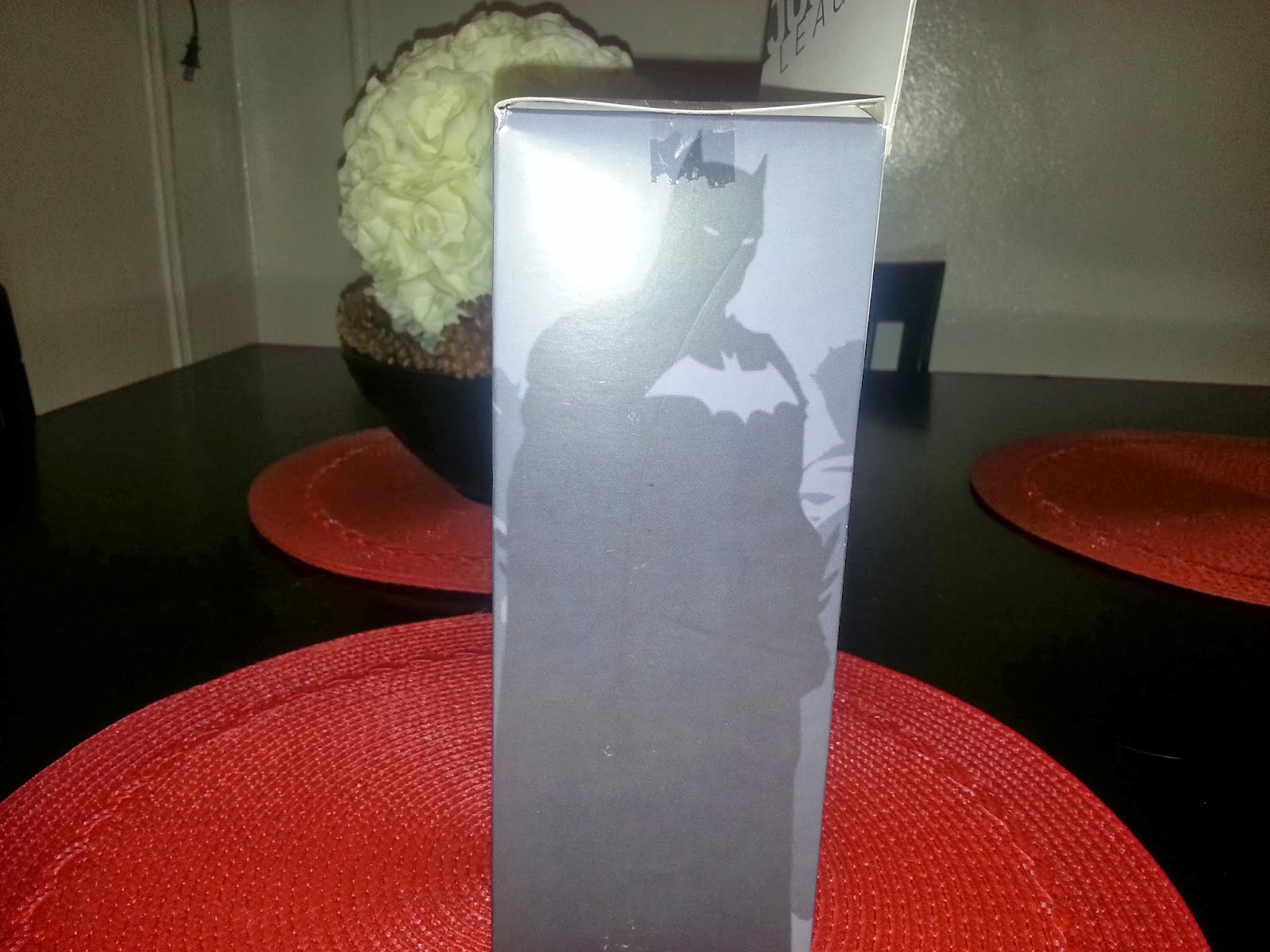 The other side has a silhouette of the Caped Crusader. Very nice graphic. I like the shadow effect with the eyes and the bat symbol whitened out. 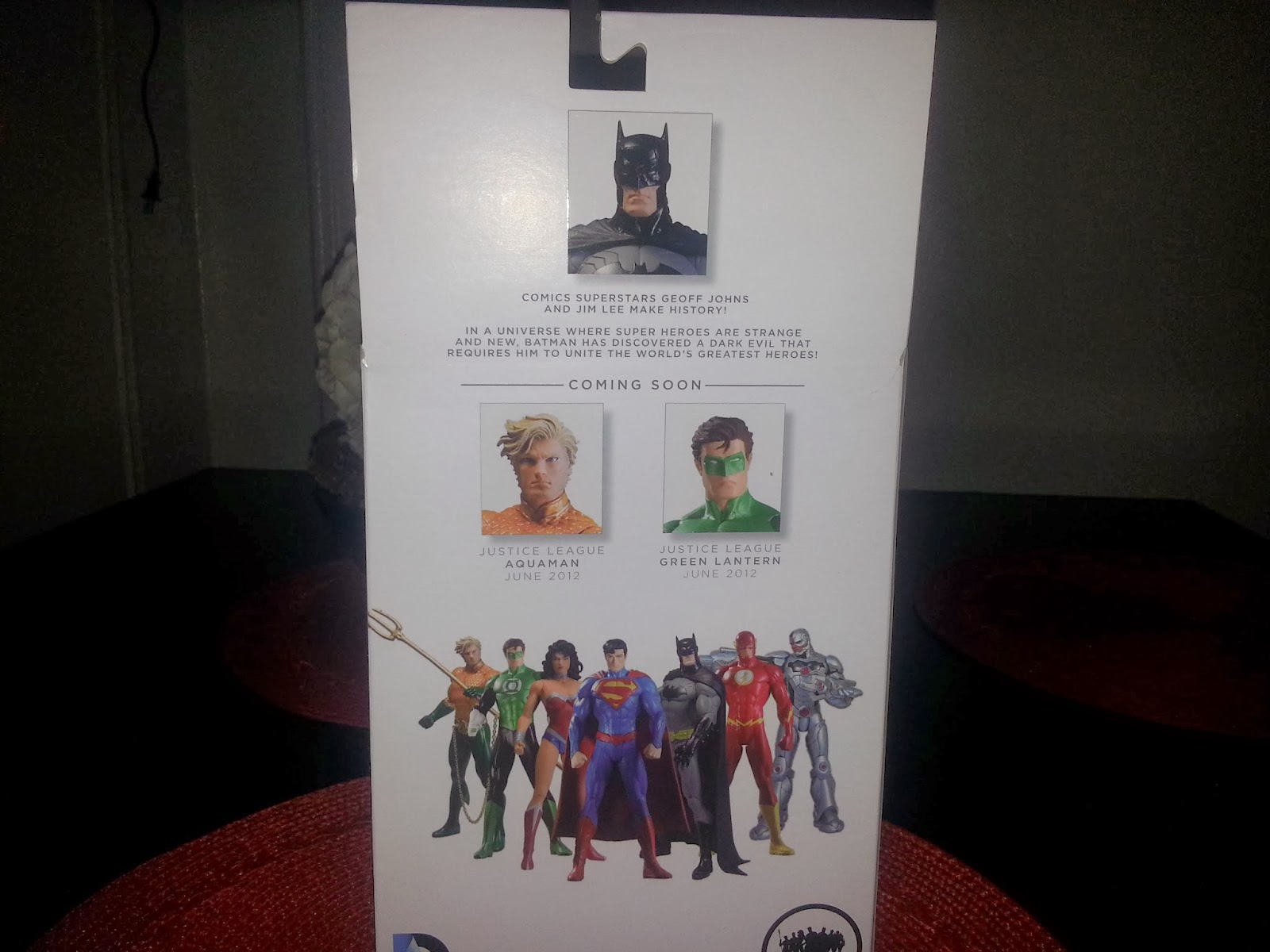 The back of the box has some info regarding the comic and shows off the figures coming out in this particular wave,which in this case is Aquaman and Green Lantern. The back also shows the rest of the figures in this Super Friends...er, I mean Justice League line. 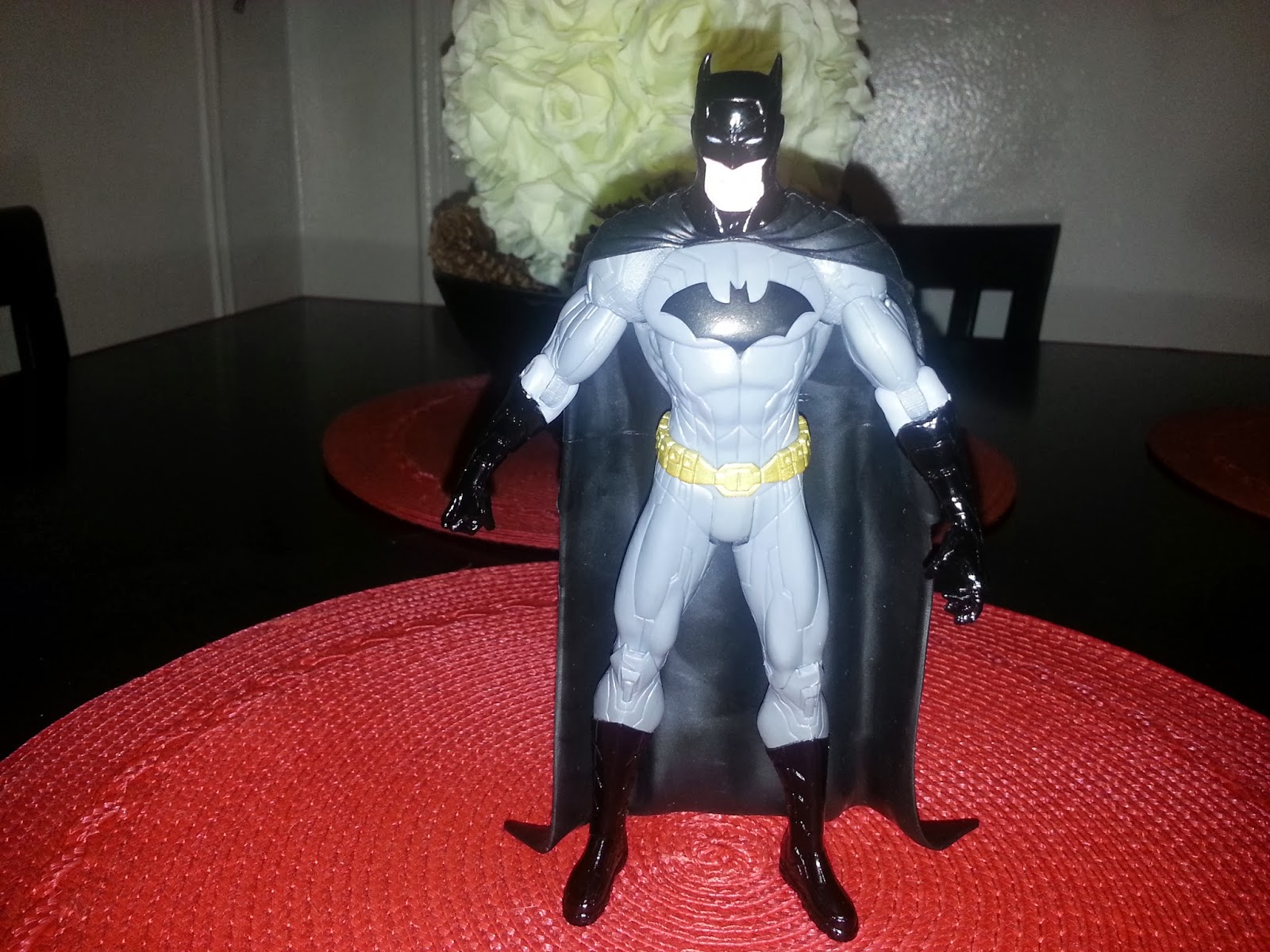 Now there is a Batman. Upon first glances at this figure in stores before I finally picked it up, I realized I liked this figure a lot. Now that I have it out of the box I can say I really, really like this figure a lot. The paint on this figure is unreal. The grey is a perfect back drop to the the black that just pops out at you. 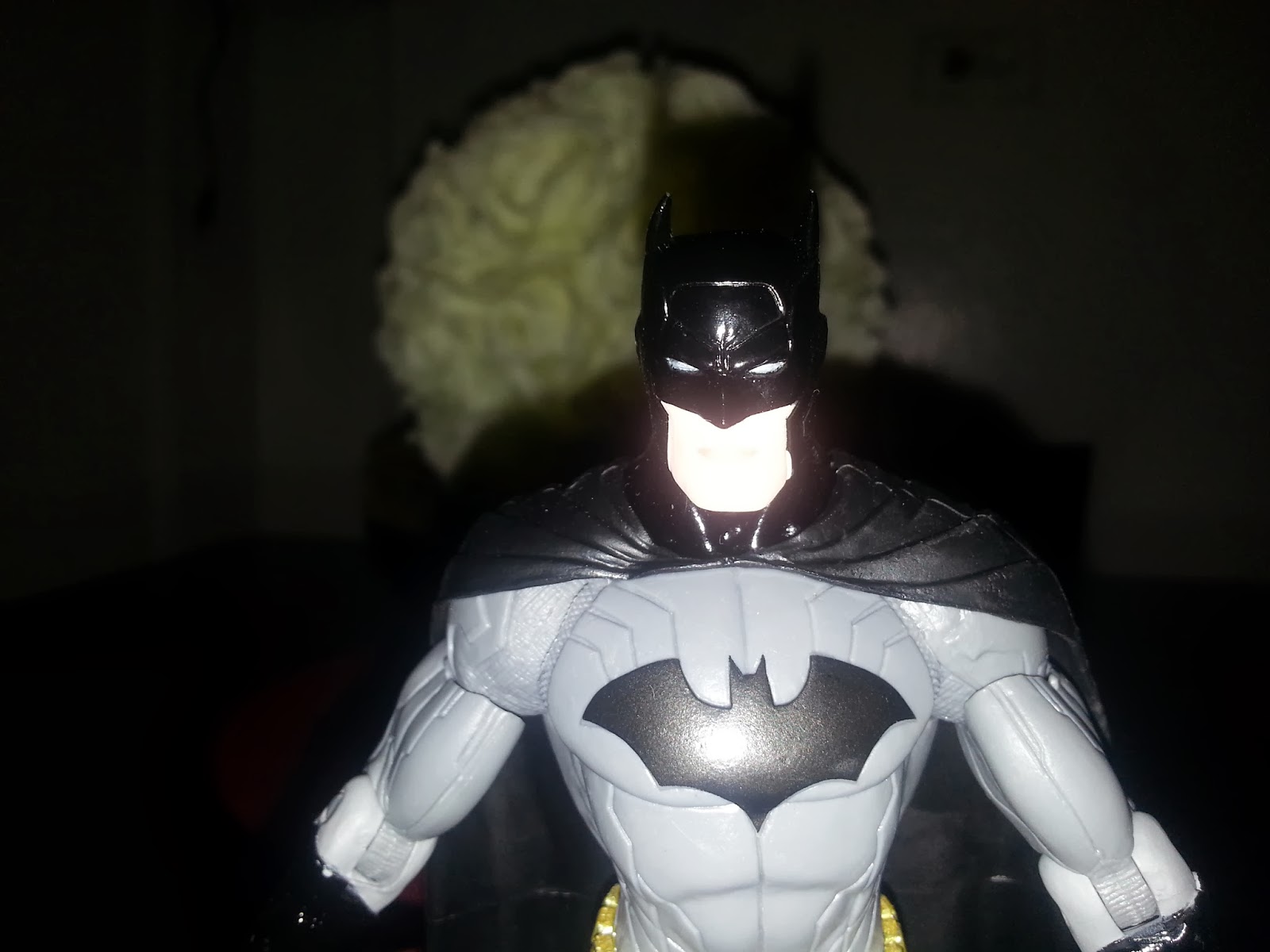 Looking closer at this figure, the sculpt on it is just fantastic. I love who this figure captures the lines on the suit just like in the comics. Although you probably can't see thanks to the flash on my camera, I can assure you that the face sculpt is awesome. Jack Matthews did a fantastic job sculpting this figure. 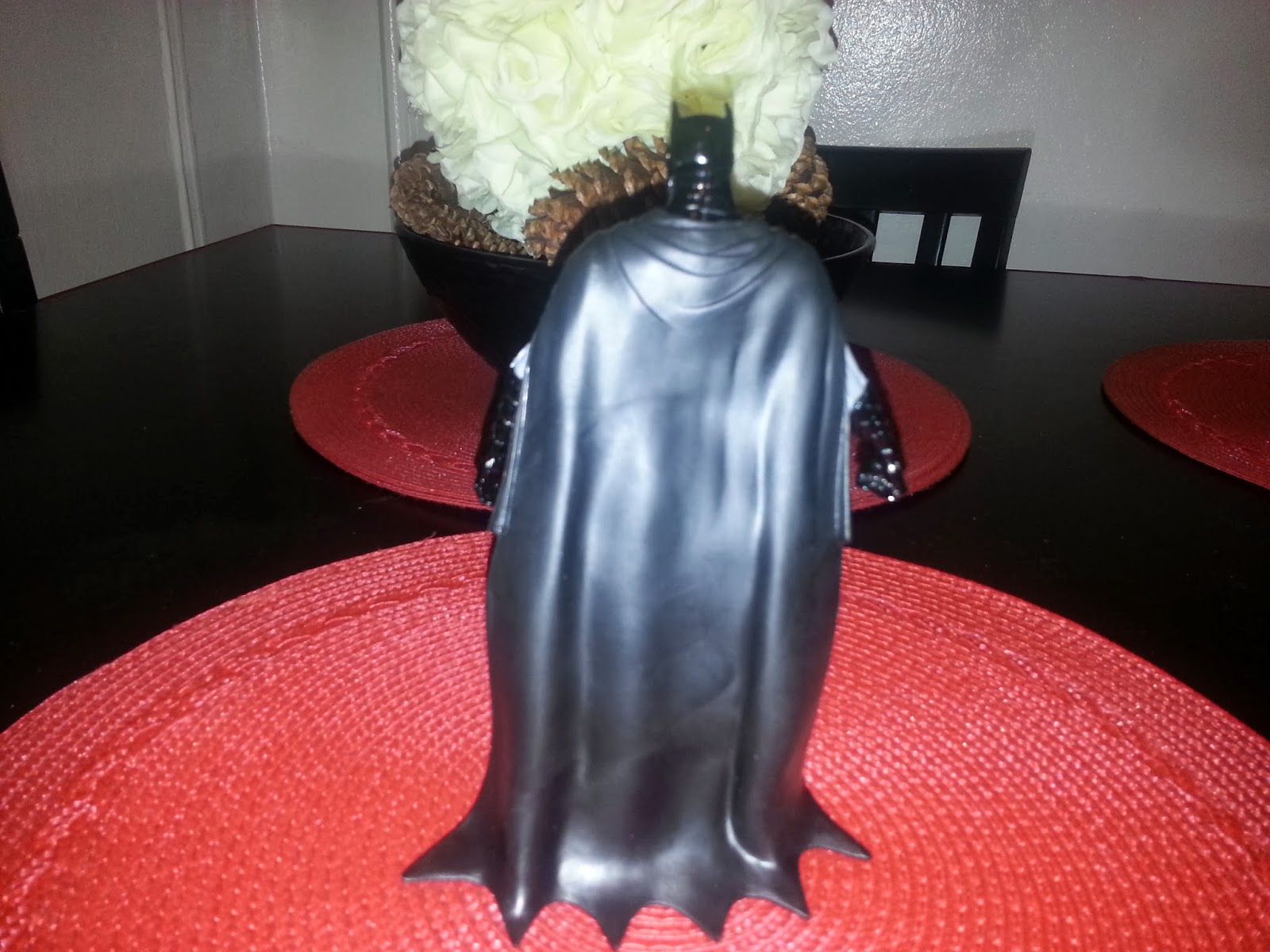 The back of the figure shows of the cape, which is a one piece made of a rubbery plastic material attached to the figures shoulders. Like the figure itself, Matthews did a fantastic job sculpting the cape. I love the folds on it and it even has a couple of folds on either side of the cape. The coolest thing about it is how the back just drapes behind and just lies on the ground.

Now, if our looking for a massively articulated figure, I would advise you to keep on looking. There is a bend at the knees, elbows and there is a biceps swivel and that's it. 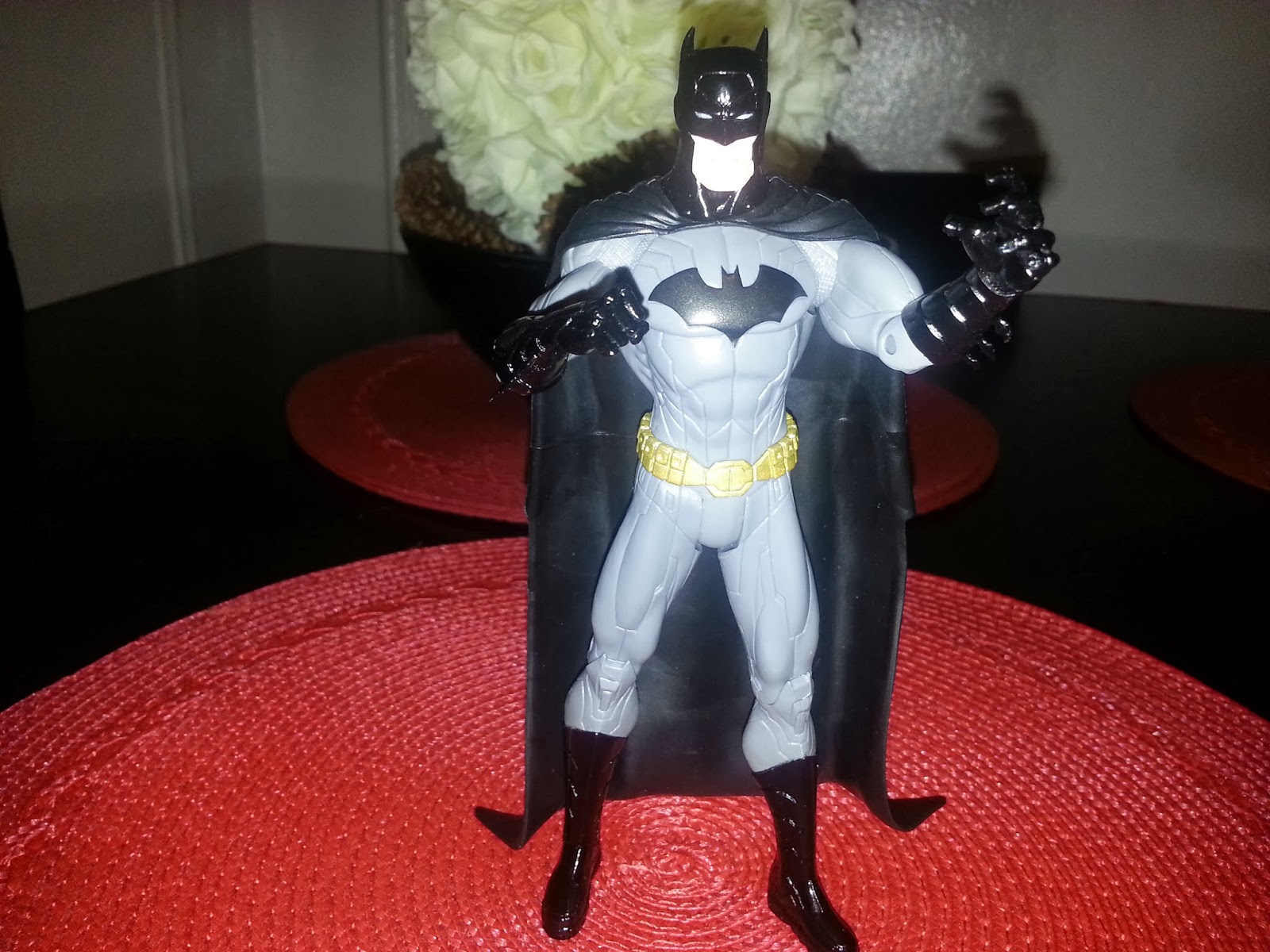 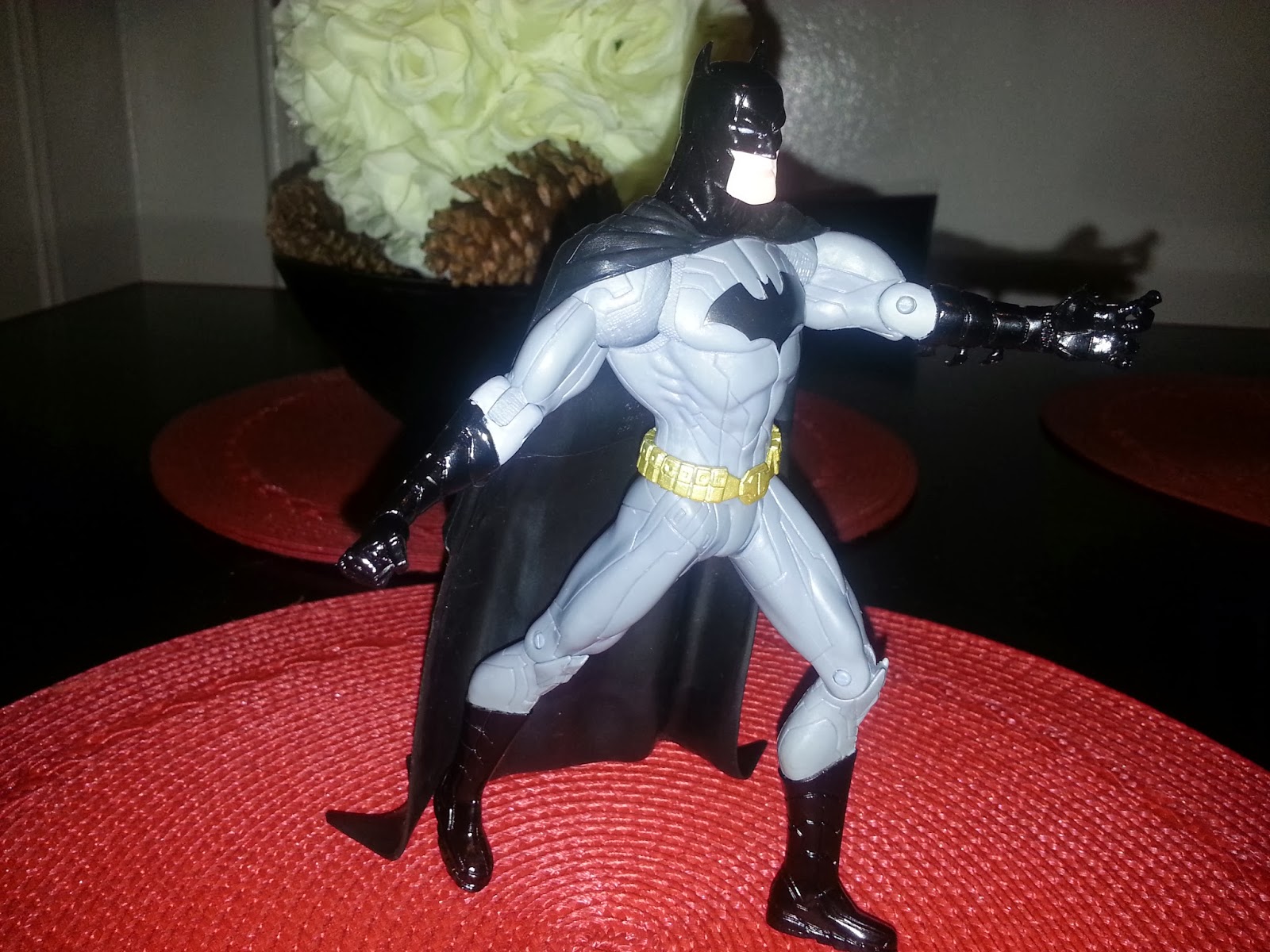 The head doesn't turn side to side, there is no movement in the fingers or toe and no hip swivel. To be honest with you, it really doesn't detract form how cool this figure is. Then again, I have never been a huge fan of too much articulation on my figures. I find that it makes them hard to stand. If I was putting them in action poses, then I could see a use for them, but I really don't pose my figures.

Now, if I had to take away marks from this figure, it would be the lack of a base and accessories. This figure is one of the more expensive ones I have picked up. Would it have killed DC to have added a batarang or two? How about a base? I do like my figures in an upright position, but considering the lack of articulation on this bad boy I don't feel that will be an issue.

Despite the lack of articulation, base and accessories, I have to say that this figure might be one of my favorites in my Batman collection. Definitely in my top five favorites. I feel it captures the spirit of the New 52 comics perfectly. Great sculpt, great paint job, great figure, period. One I feel that should be in every Bat collection.
Posted by Yankeejetsfan at 11:07 PM