Who Needs A Bank When I Have Batman and Spidey?

I love the bank busts I see at my comic book stores. They look real nice displayed and always catch my attention when I pass by the display. I've seen some nice ones too. Superman breaking the chains, Wonder Woman, Wolverine and his claws and even Darth Vader. But my favorite ones, obviously, are the Spider-Man and Batman bank busts. I never had the chance to pick them up, but I was able to get a couple as a Christmas gift. 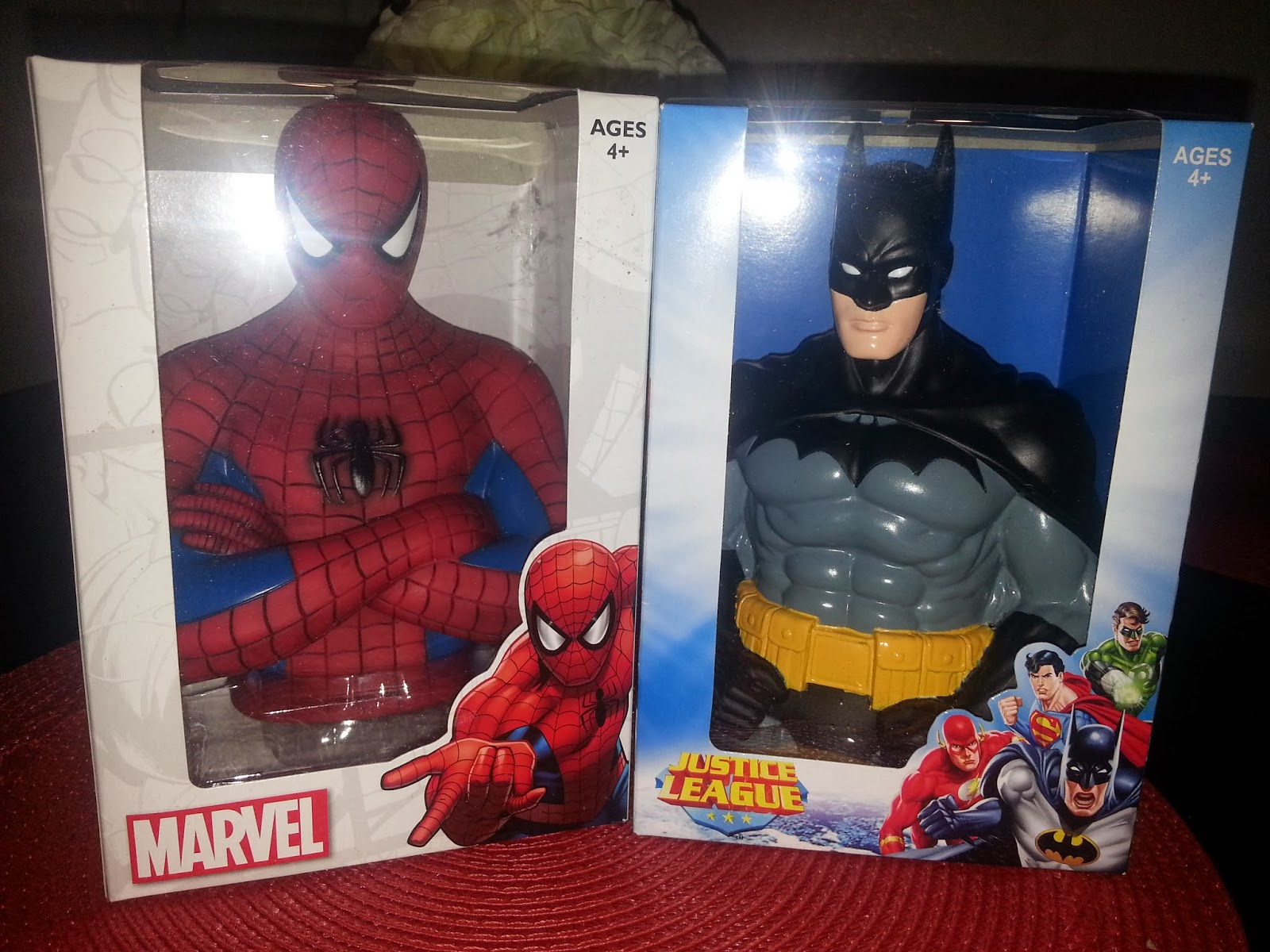 Right off the bat, I have to say how cool these busts look in their packaging. Both packages have a clear window so that you can see what your getting. Marvel has their logo on the lower left corner and a drawing of the character your picking up on the right. DC just has the Justice League on the left corner and a drawing of Flash, Superman and Green Lantern with Batman leading the way. I'm not sure if that's the way it is on all the packages or if it's that way to indicate your buying Batman. 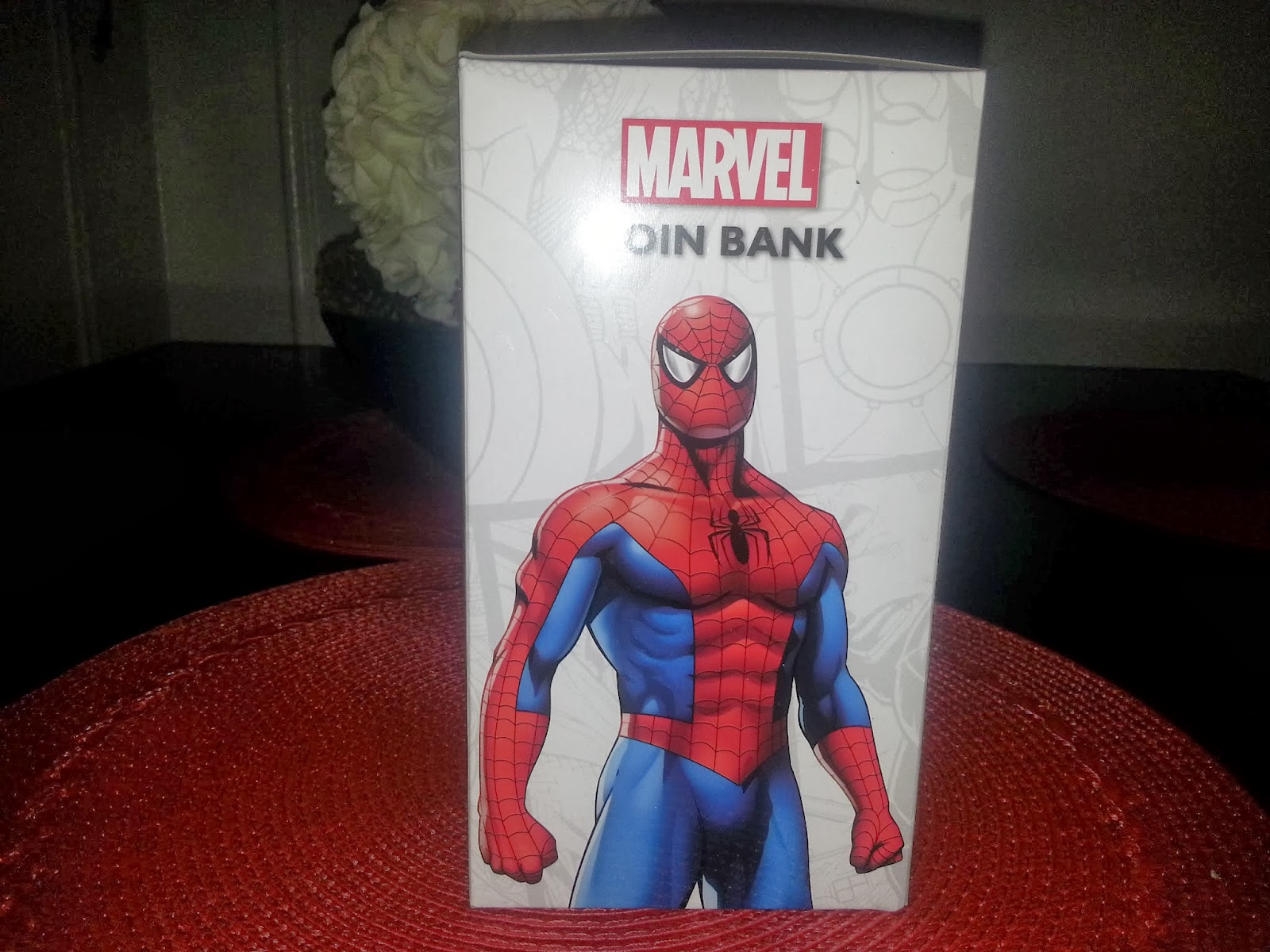 A drawing of Spider-Man appears on either side of the box. 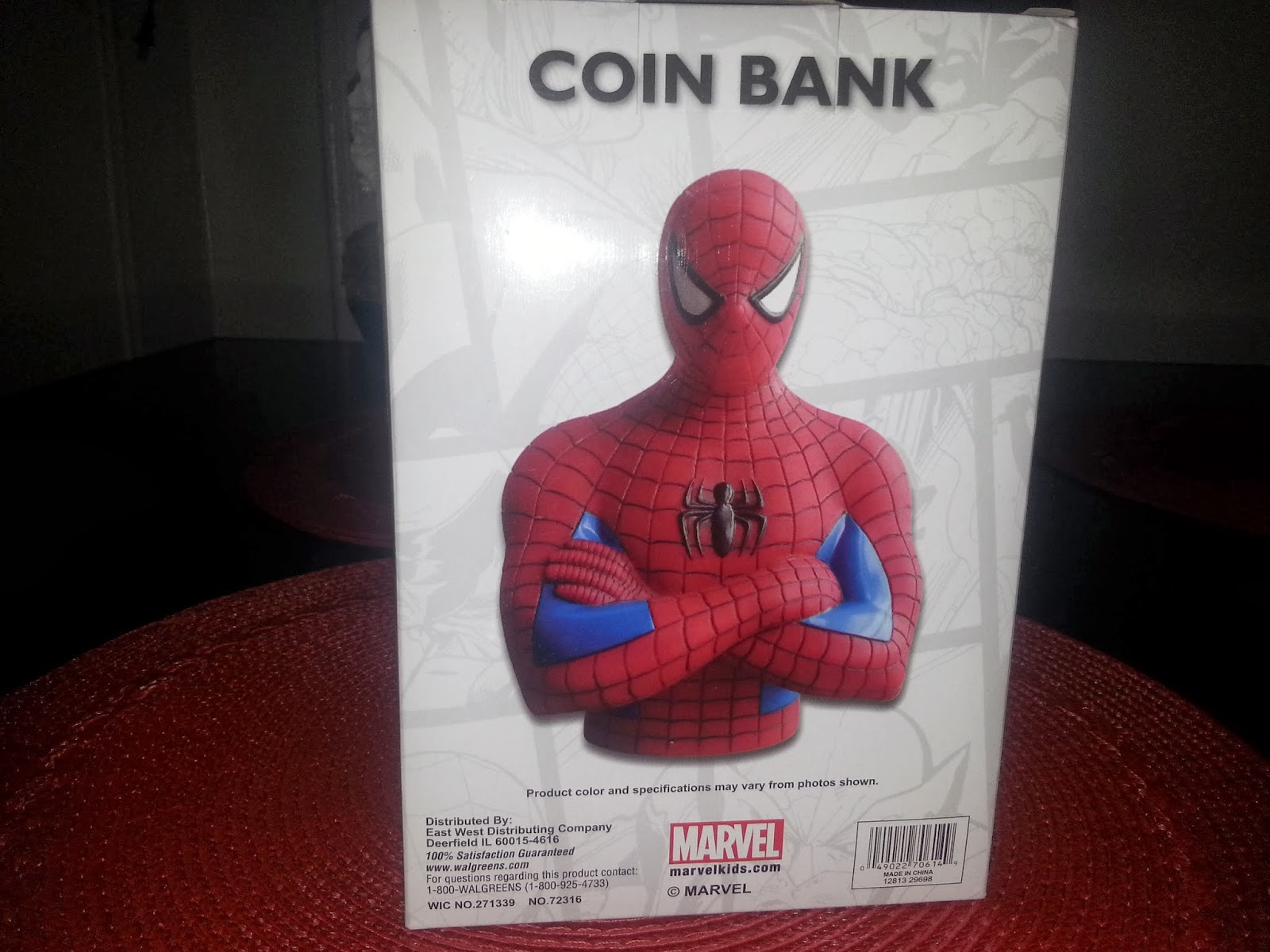 The back of the box has a picture of the bank your purchasing. Not sure why when we have a clear window to see the figure. I think another really nice drawing would have been better or maybe the other banks in the Marvel line. 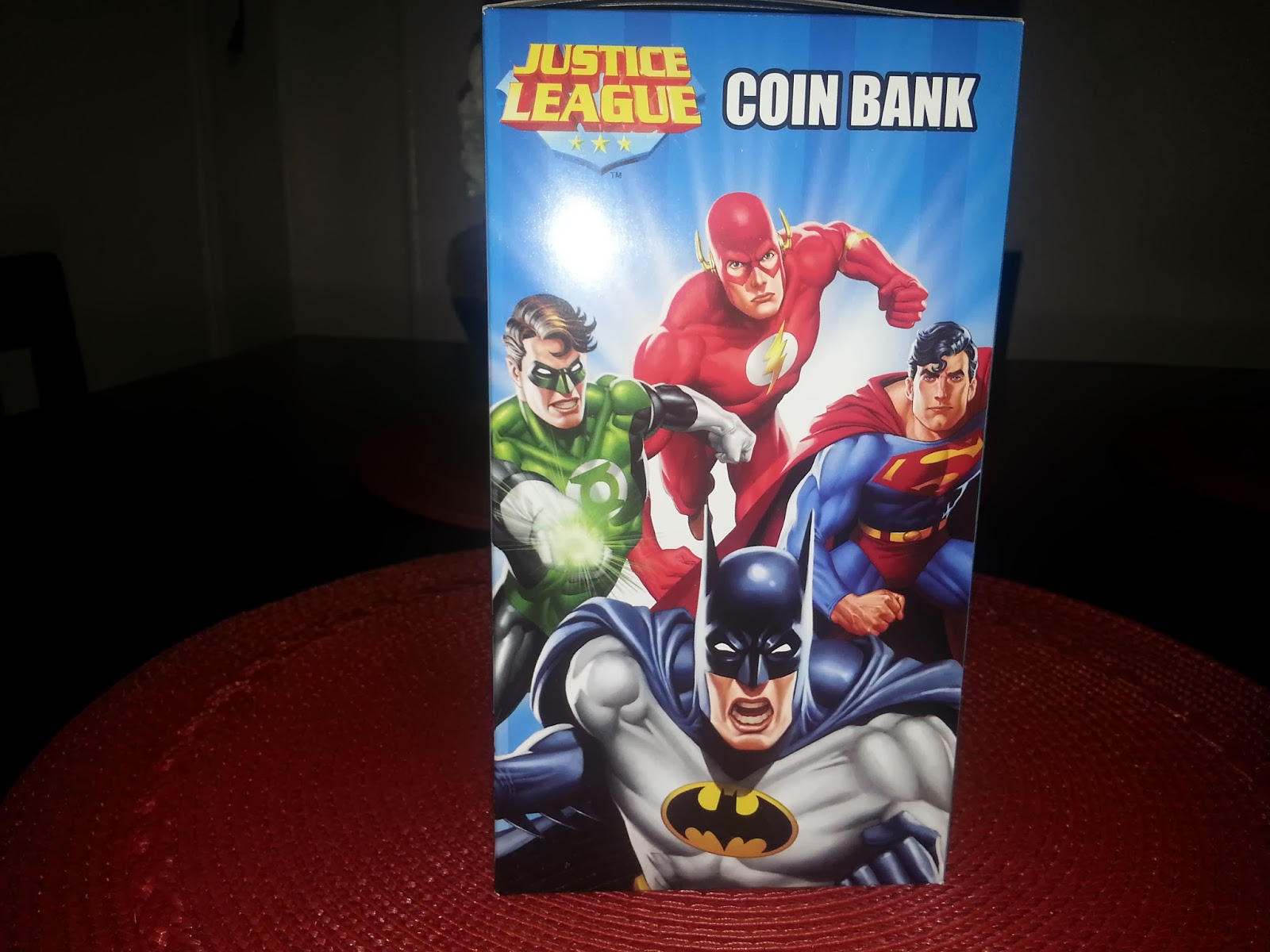 East West Distributing, the makers of the bank, did a nicer job with the DC bank. Instead of a white package, we have a nice blue one with a drawing of the Justice League on either side. 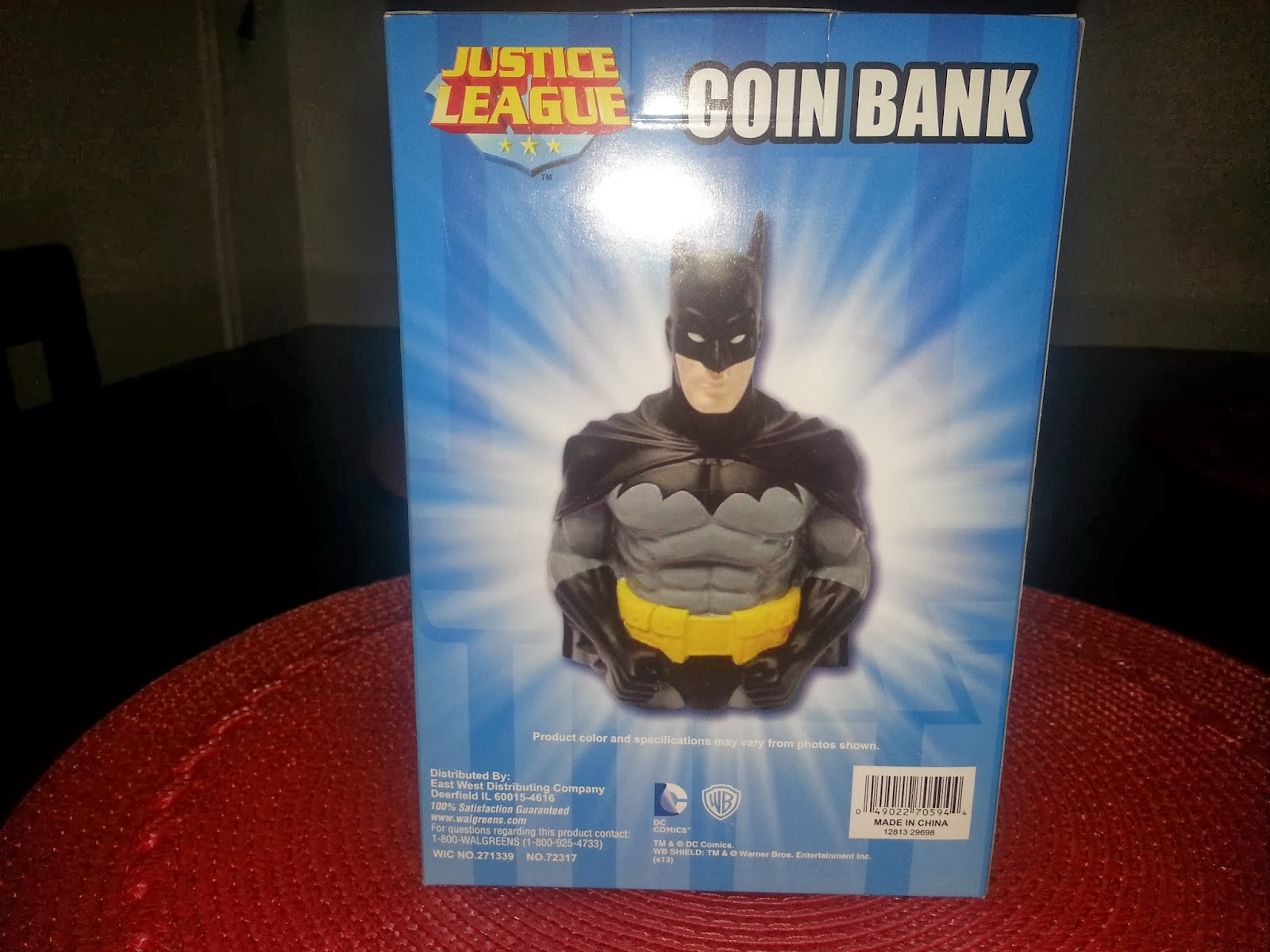 Yes, we have another picture of said bank, but I'm ok with it because the presentation on the box is a lot nicer than the Marvel box. Plus, I am guessing the drawing of the Justice League on the front and sides are the characters we get in DC's line. Couldn't Marvel do the same? Maybe come out with an Avengers line? Include Captain America, Thor, Hulk and Iron Man with Spider-Man? Maybe they have. I haven't seen theses banks until I got them for Christmas.

Here's the banks out of their boxes. First up is the Caped Crusader. 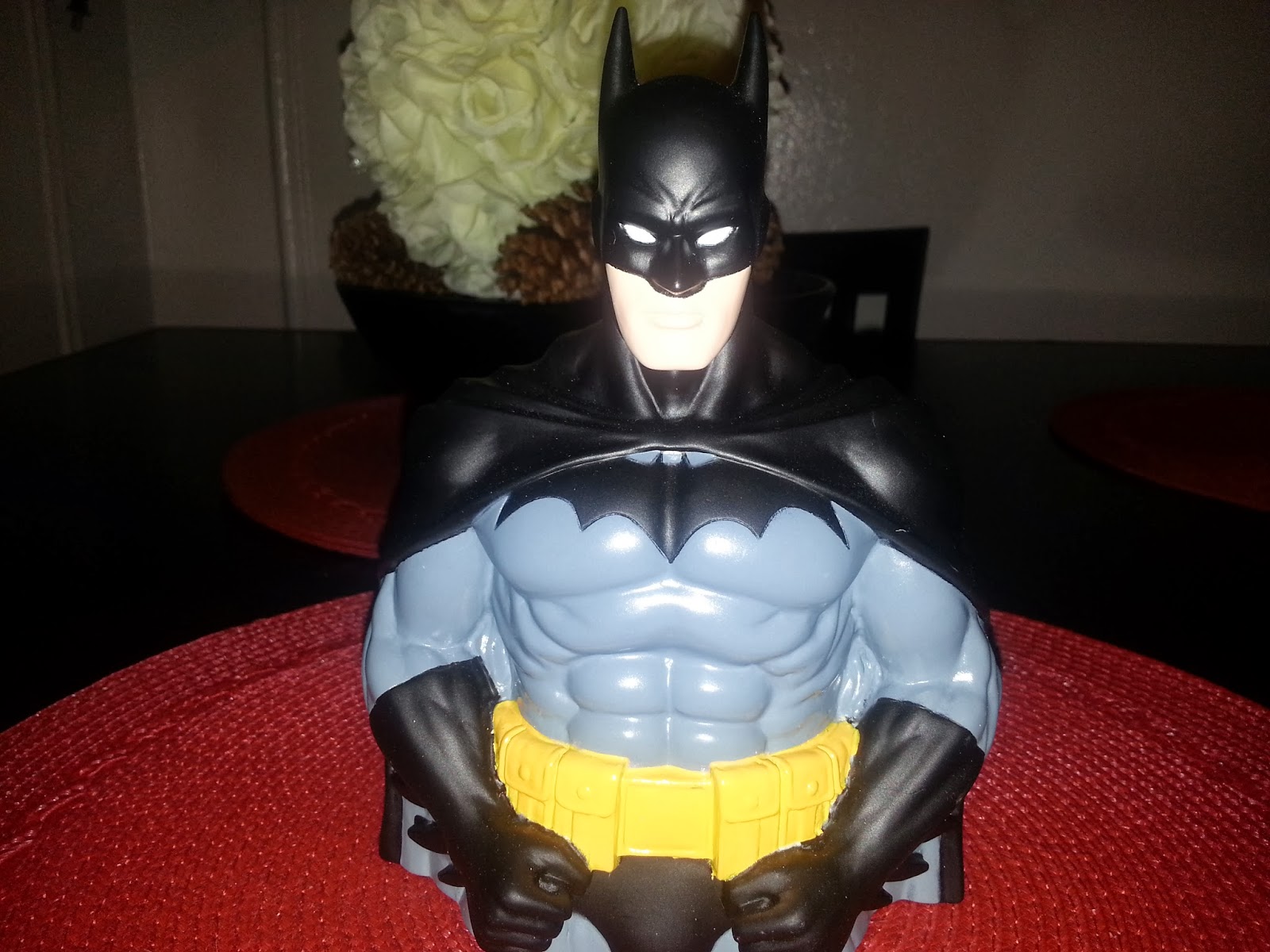 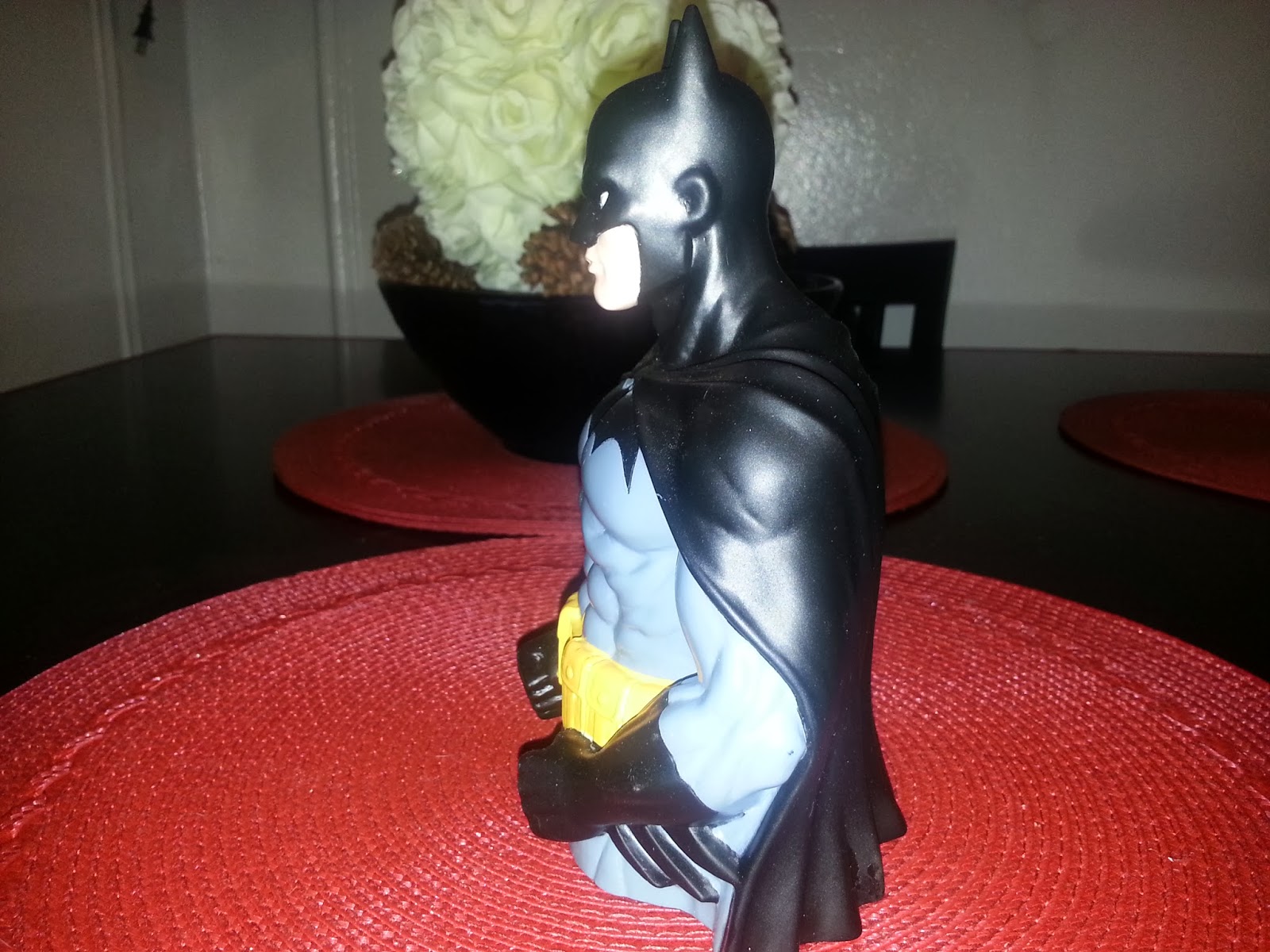 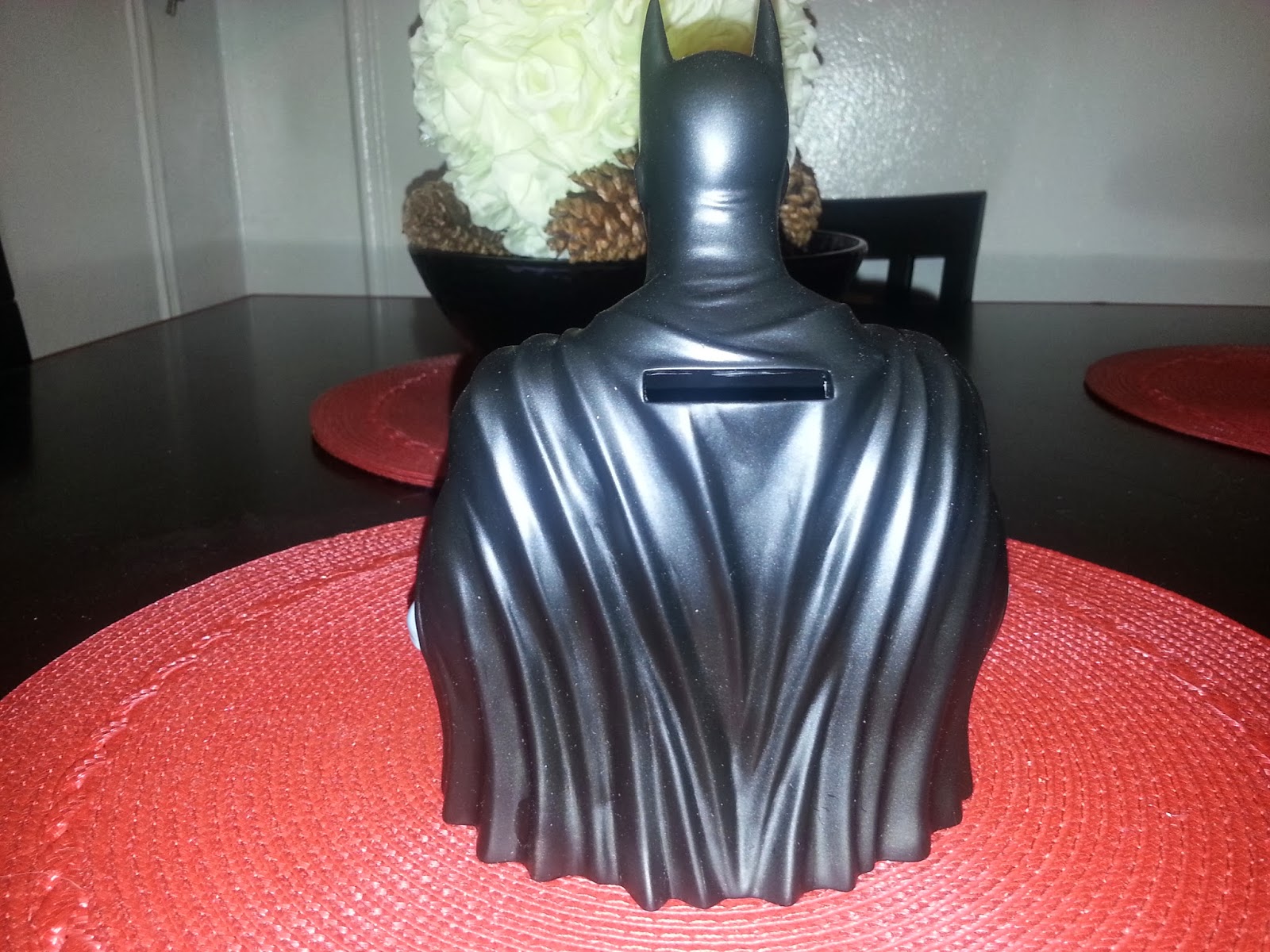 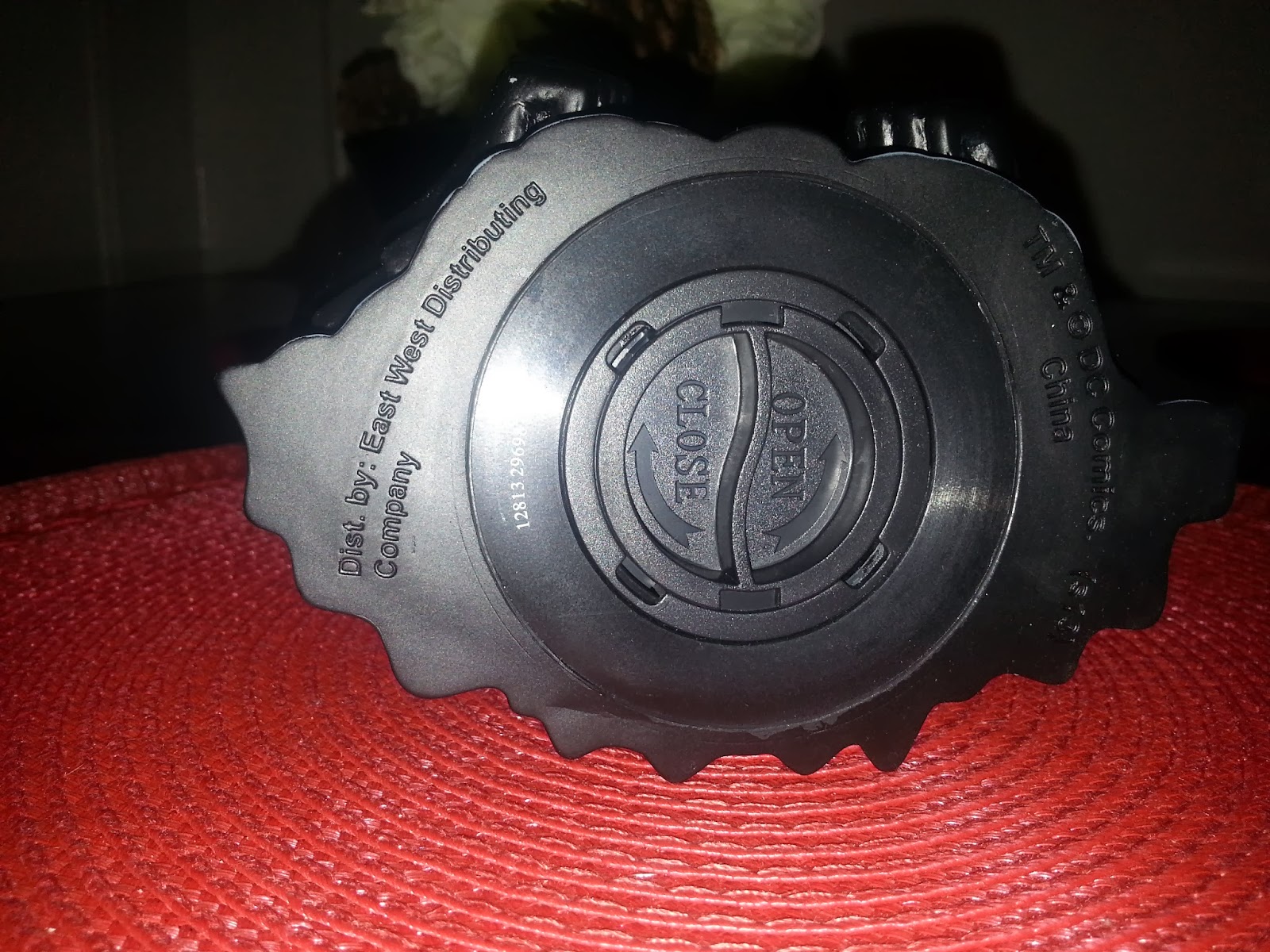 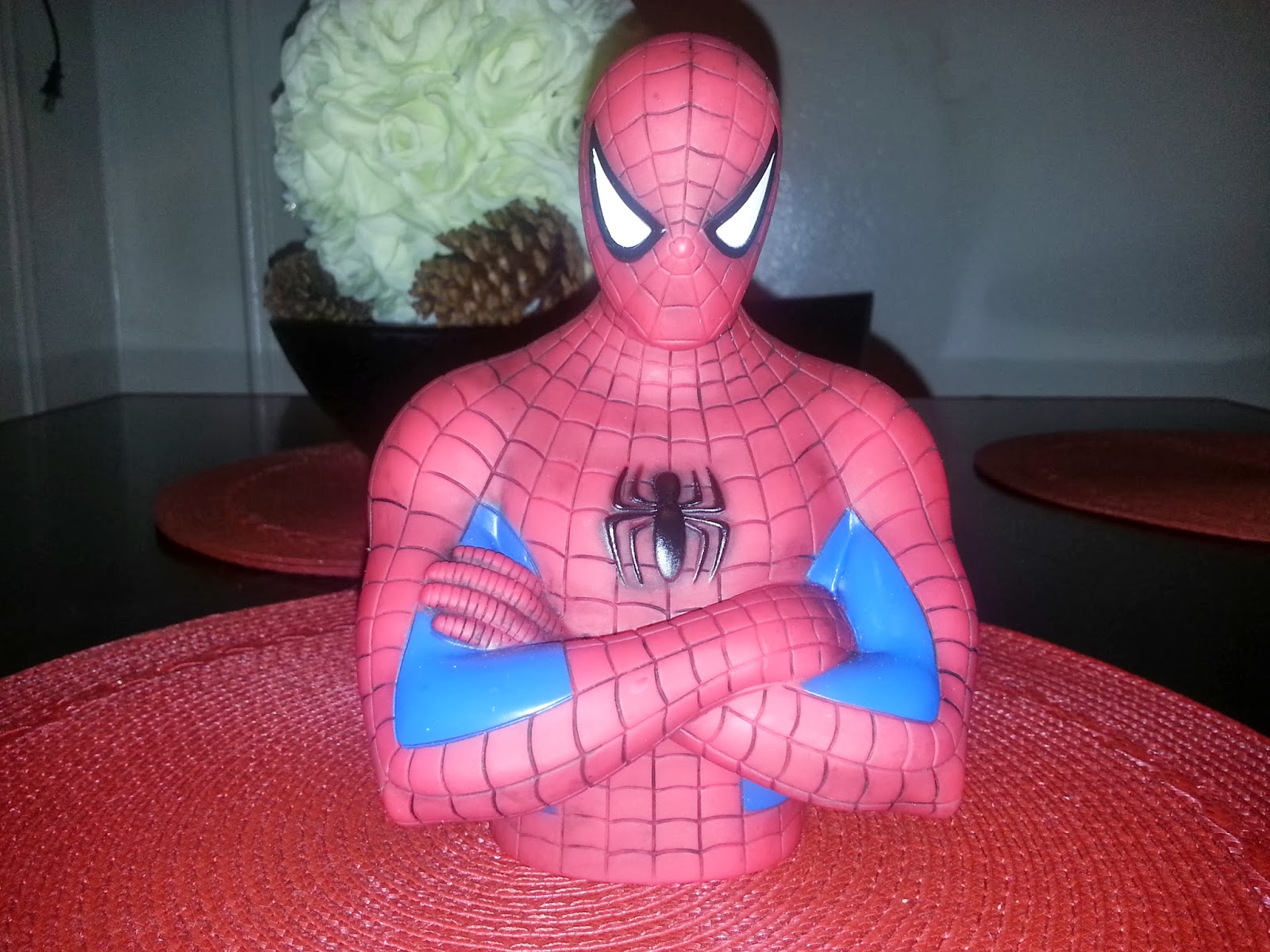 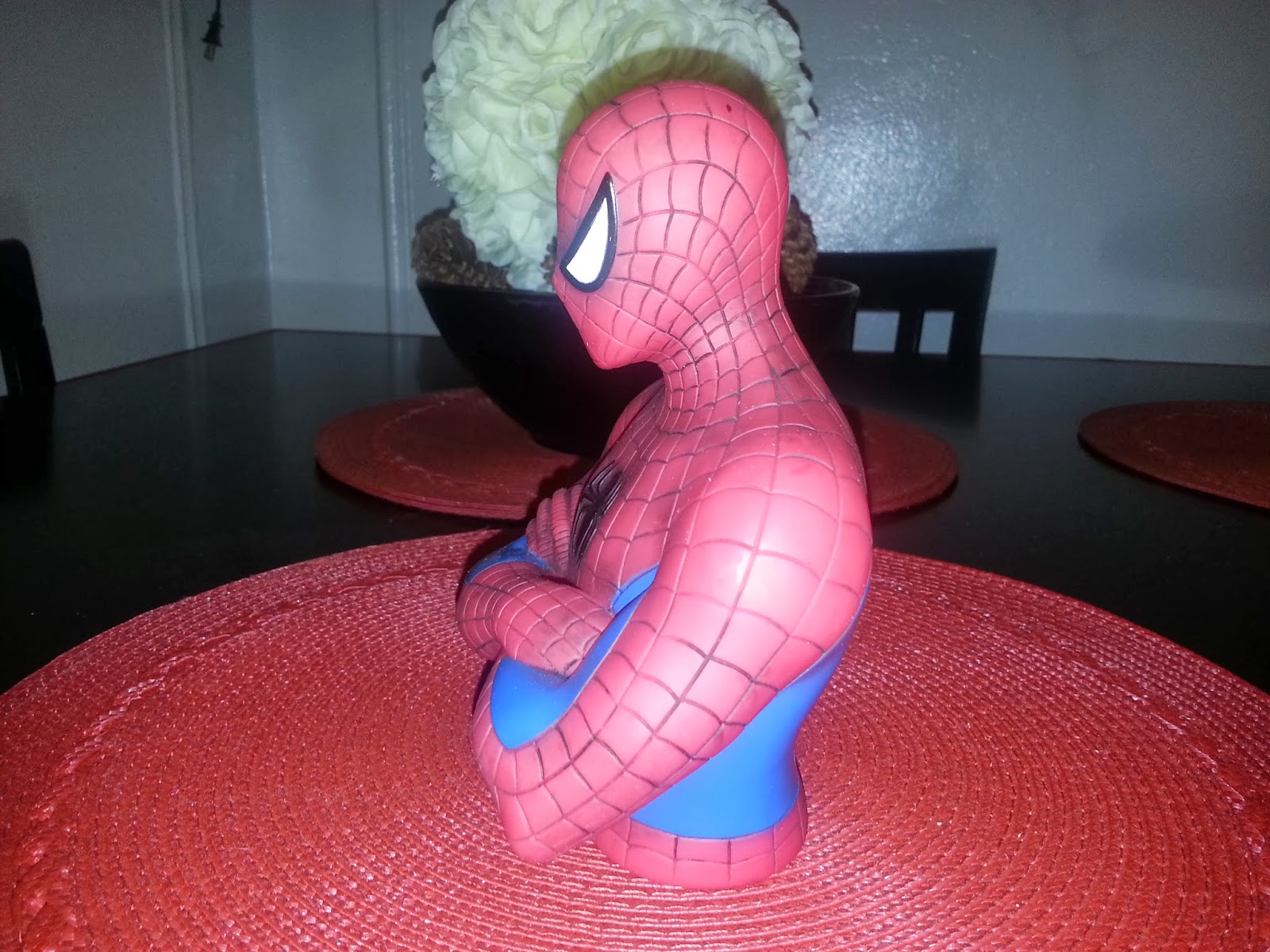 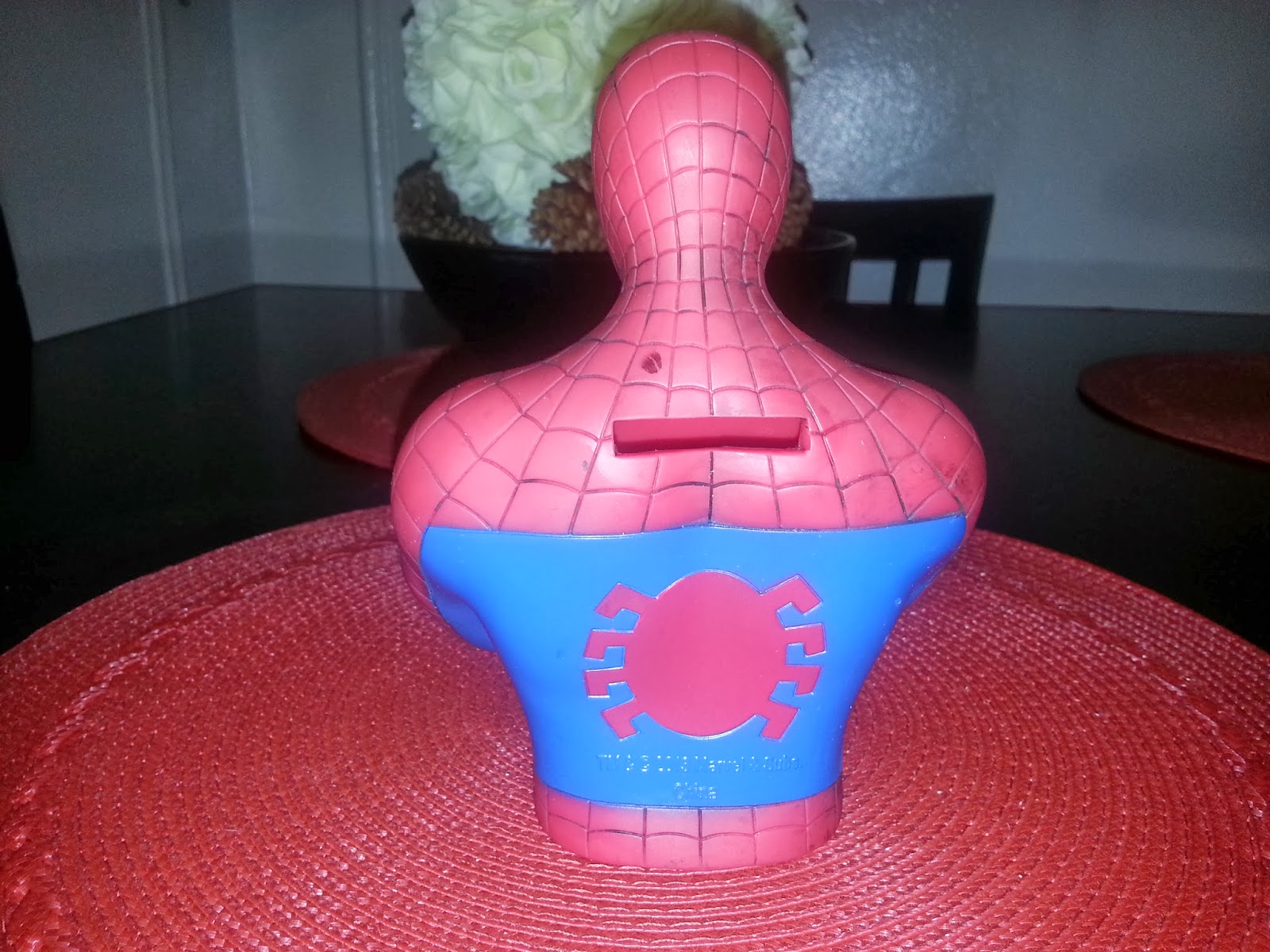 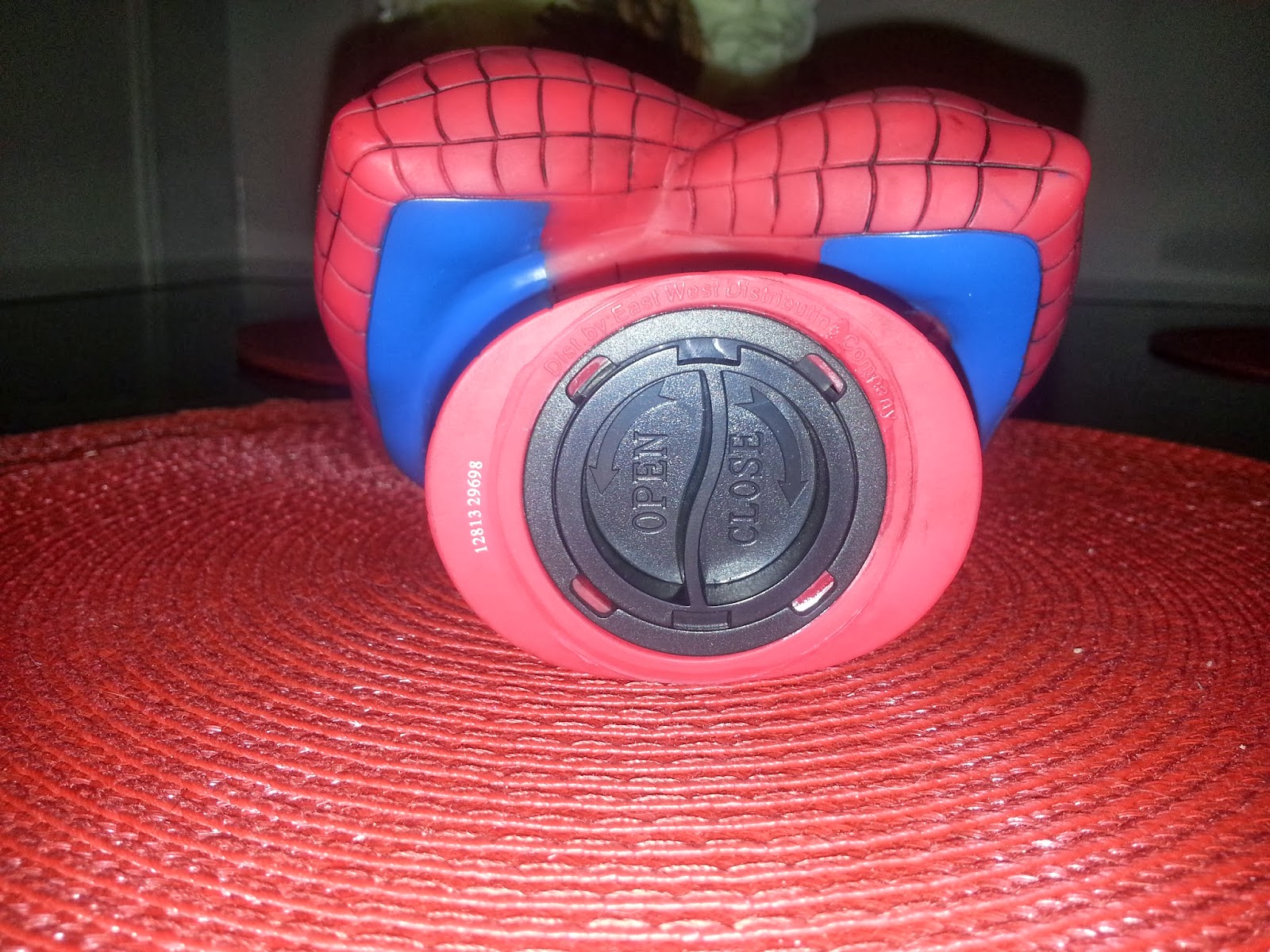 Both banks are made of hard plastic. They smaller than the banks that you see in the comic stores, but size ain't everything. To me, it's the way they will look on your shelf that counts and I think these will look really good.

What the Batman bank has over the Spider-Man bank are the sculpts. The Batman bank has so many details going for it from the folds in his cape, to the muscles on his body, to the brow frowning under the mask to even the sculpting of ears under the cowl. The Spider-Man is a very nice bank, but it doesn't have the details that Batman has. Batman's paint job is even better as some of the black on the lines of Spidey's webs disappear at some spots. Again, I still like the Spider-Man and I am quite pleased that I have it.

So, I will wrap this up by stating that I think these banks are very nice. I believe they are exclusive to Walgreens as the Walgreens website is on the back of the boxes. The slight edge goes to DC for it's presentation on the packaging, to the paint job to the details on the bank itself. But I still love the Spider-Man and I am glad I will be able to add him as well as Batman to my collection.
Posted by Yankeejetsfan at 12:04 AM