When You Care Enough To Send The Very Best... 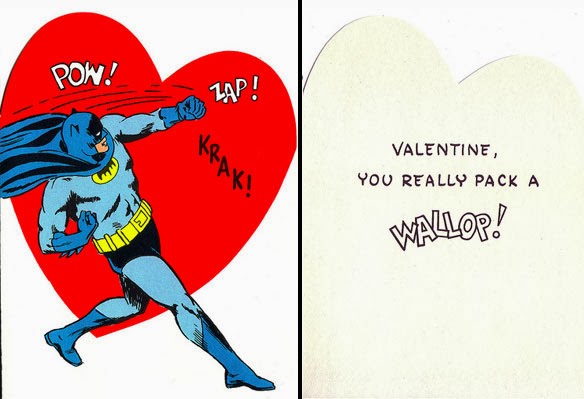 I love my girlfriend. She knows me pretty well. My likes, my dislikes. My hobbies and everything else in between. Ever since we have been together, she has fed my Batman obsession and has fed it well. Thanks to her, I was able to add a few things to my Batman collection like t-shirts, watches, POP vinyls, Blu-Rays among other things.

This year, for Valentine's Day, she topped them all. 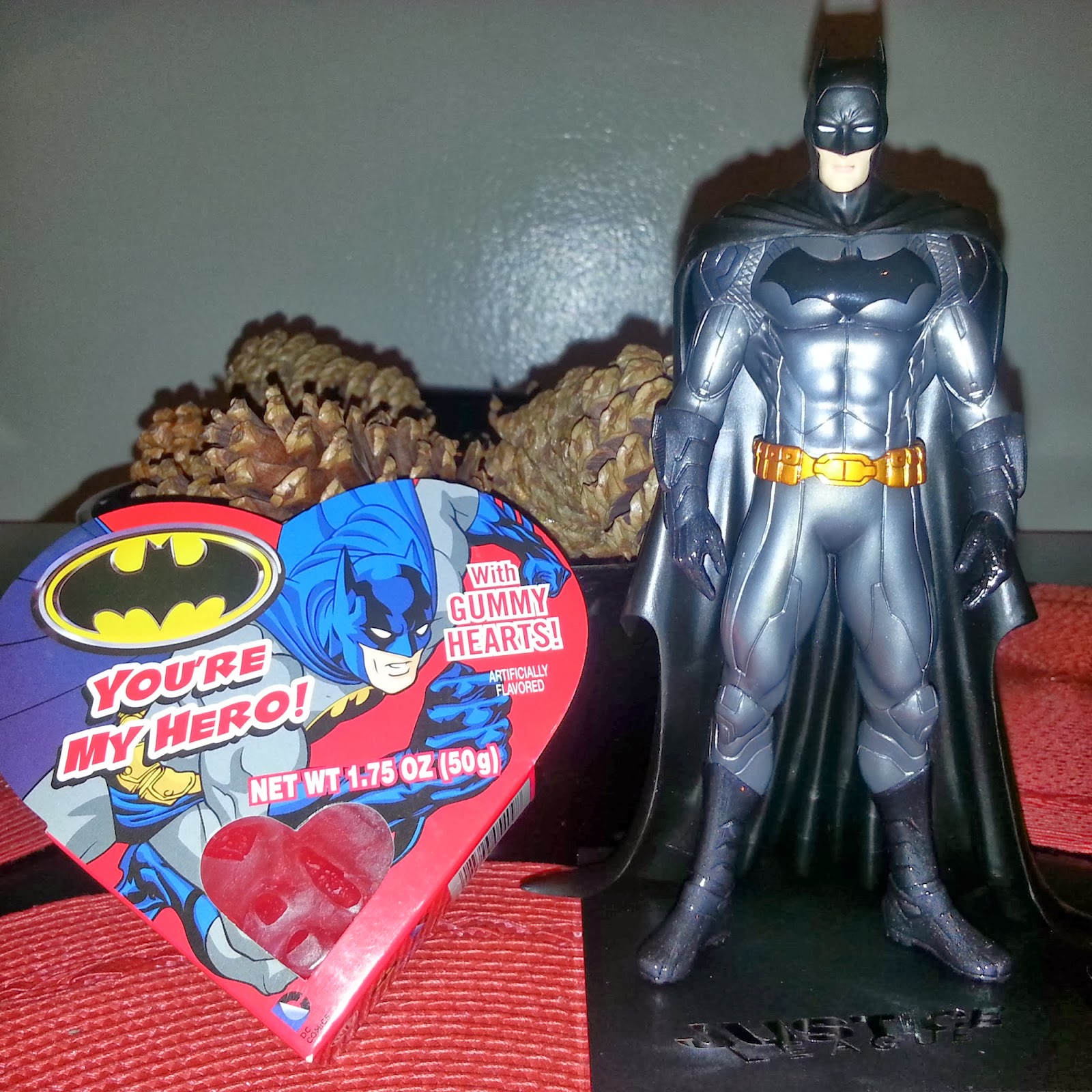 Seriously, how awesome is this? She gave me a Batman heart with some Bat-gummies in them. I am seriously tempted to tear open that sucker and inhale the contents inside, but I am restraining myself. I want to put it up on my shelf along with all my other Batman items. I will admit, I can hear Carly Simon's "Temptation" whenever I see that heart.

As you can see, she also bought me the Kotobukiya ArtFX DC New 52 Batman statue. I was floored when she got this for me. She knew that I wanted this for a very long time and now it's all mine. I have fogged up too many a display case looking at this and now that I have it, it's even more fantastic than I imagined. I have gushed over this piece long enough. On to the review. 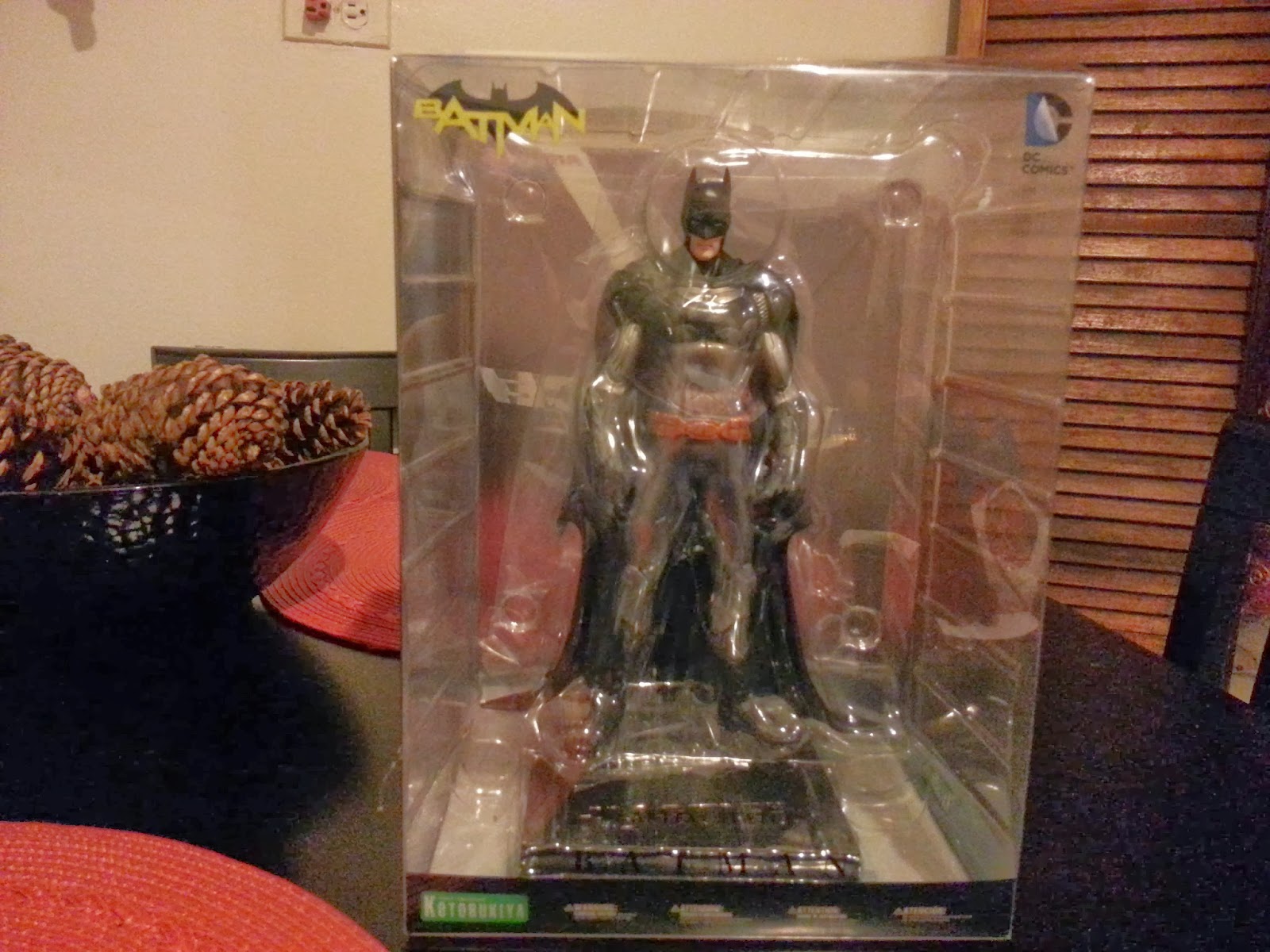 The statue comes in a clear plastic package. You can see the statue inside the package as clear as day. The Batman logo is on the top left hand side and the DC Comics logo is on the top right. The lower middle lets you know which statue your buying (if you couldn't tell just by looking through the plastic) as well as the Kotobukiya name and various warnings under that. 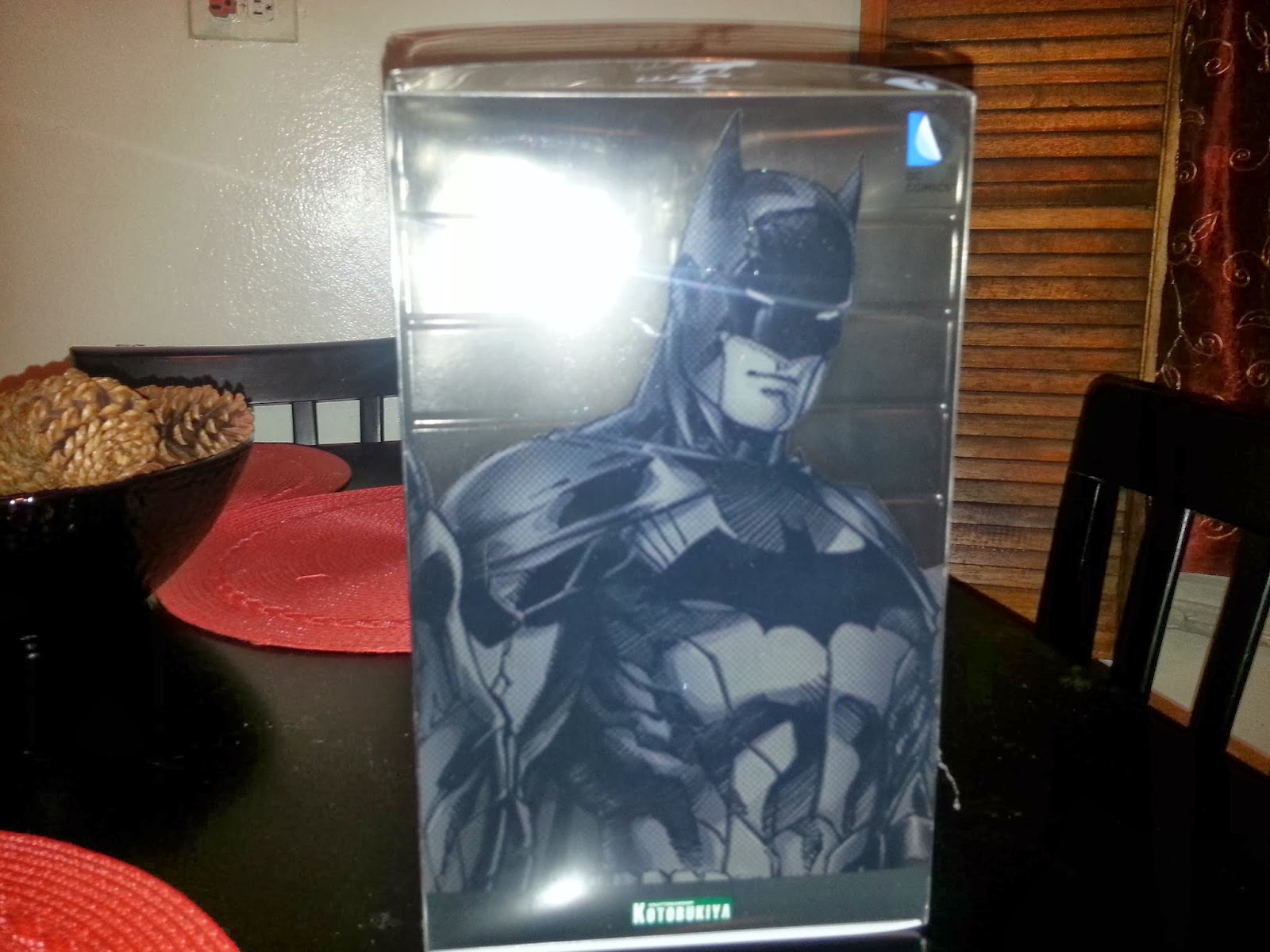 On one side of the box, you get a picture of the Dark Knight. 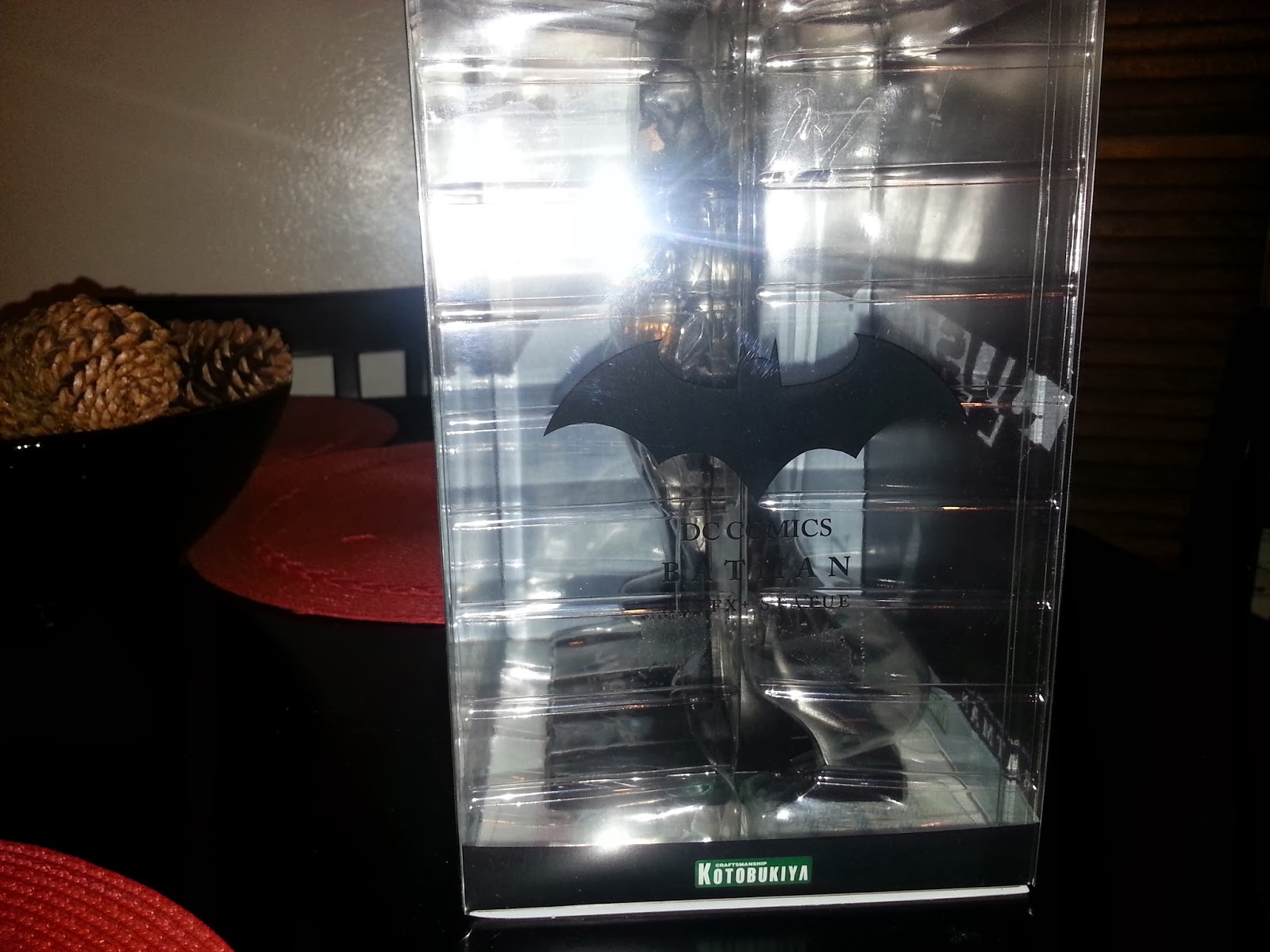 On the other side you get the bat logo. 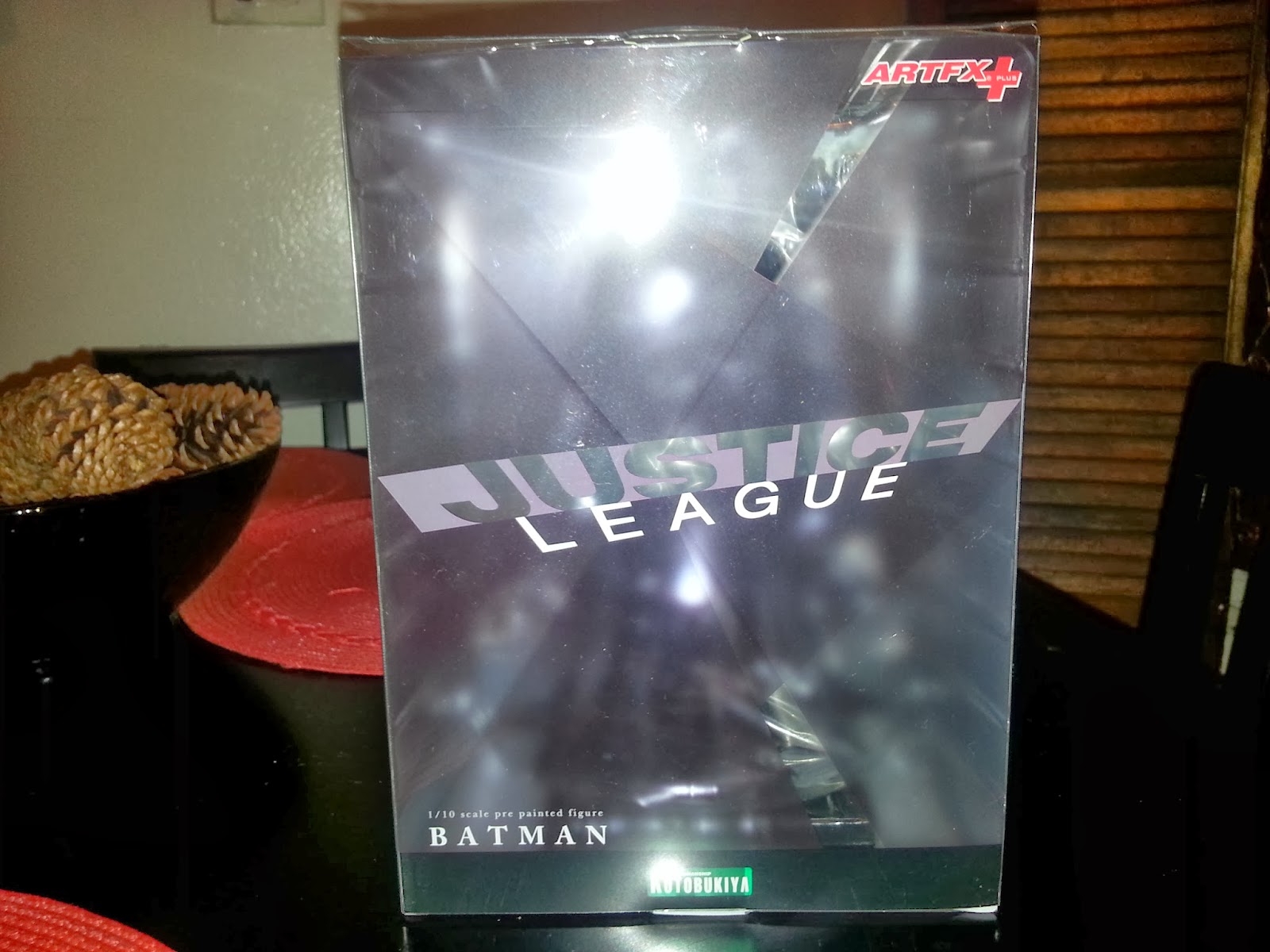 That back has the New 52 Justice League logo. The upper right corner also has the Artfx logo. 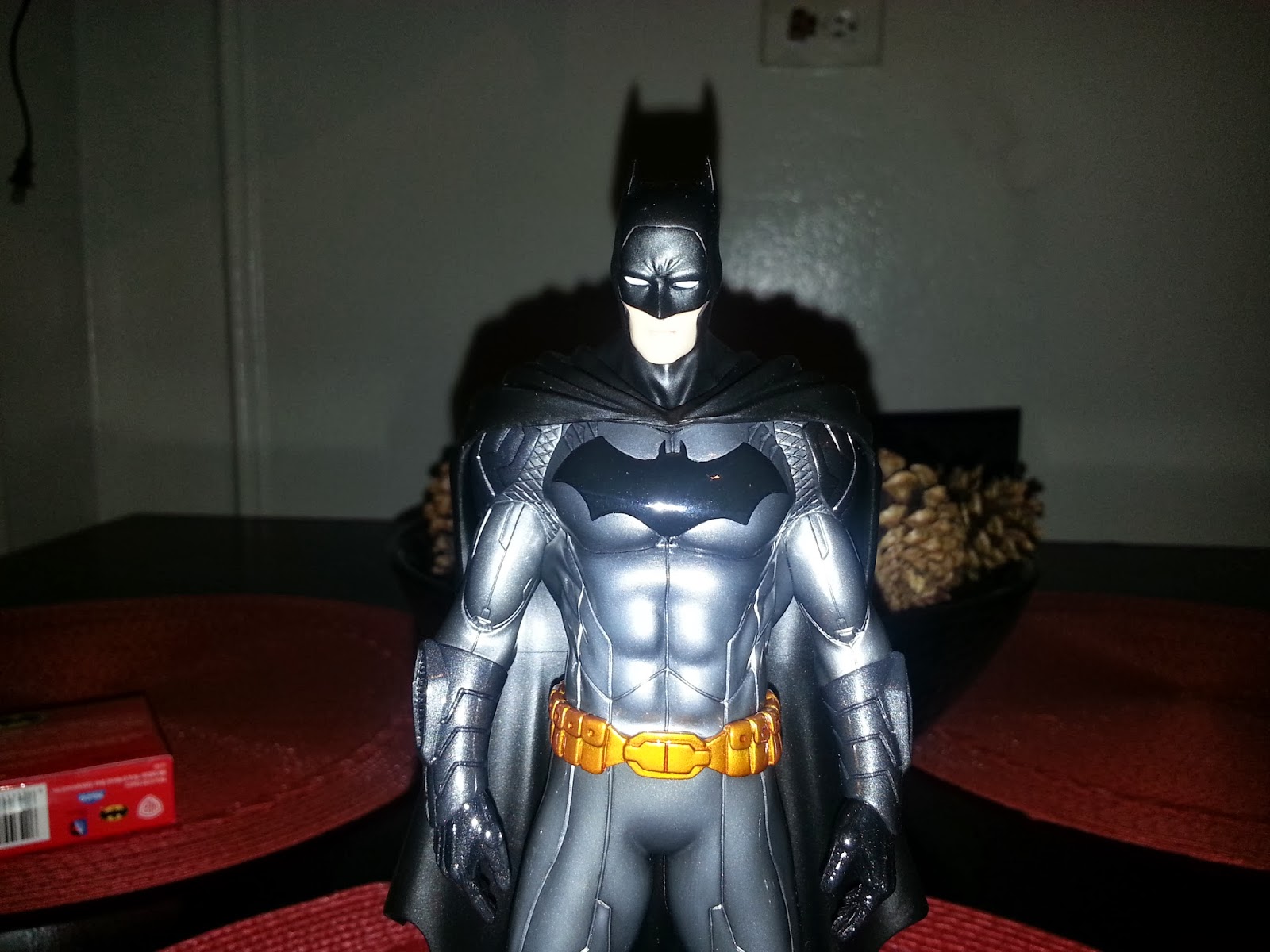 Out of the box, I am gushing again. The detail on this statue is terrific. The bat logo is featured prominently on his chest, the sculptor, Goutaro Takeuchi,  sculpted the chain mail in the Bat Suit's armor as well as all the details on the costume. I love the metallic finish on this costume.

They also did a great job on Batman's cowl. The paint job is great. They painted the cowls eyes without any spillage of white anywhere on the cowl. The sculpting of the cowl was done just as good as the outfit. The ears are not bent inward or outward. The cowl has folds in the neck and where the eyebrows would be and has the lines that would make up the cowl.

When holding the statue, I was a bit surprised at how much it felt like I was holding an action figure. It seems that the statue is made of  a hard plastic or PVC, not plaster or resin like other statues. There is no articulation in this statue. Just the Batman and the base which he stands on. 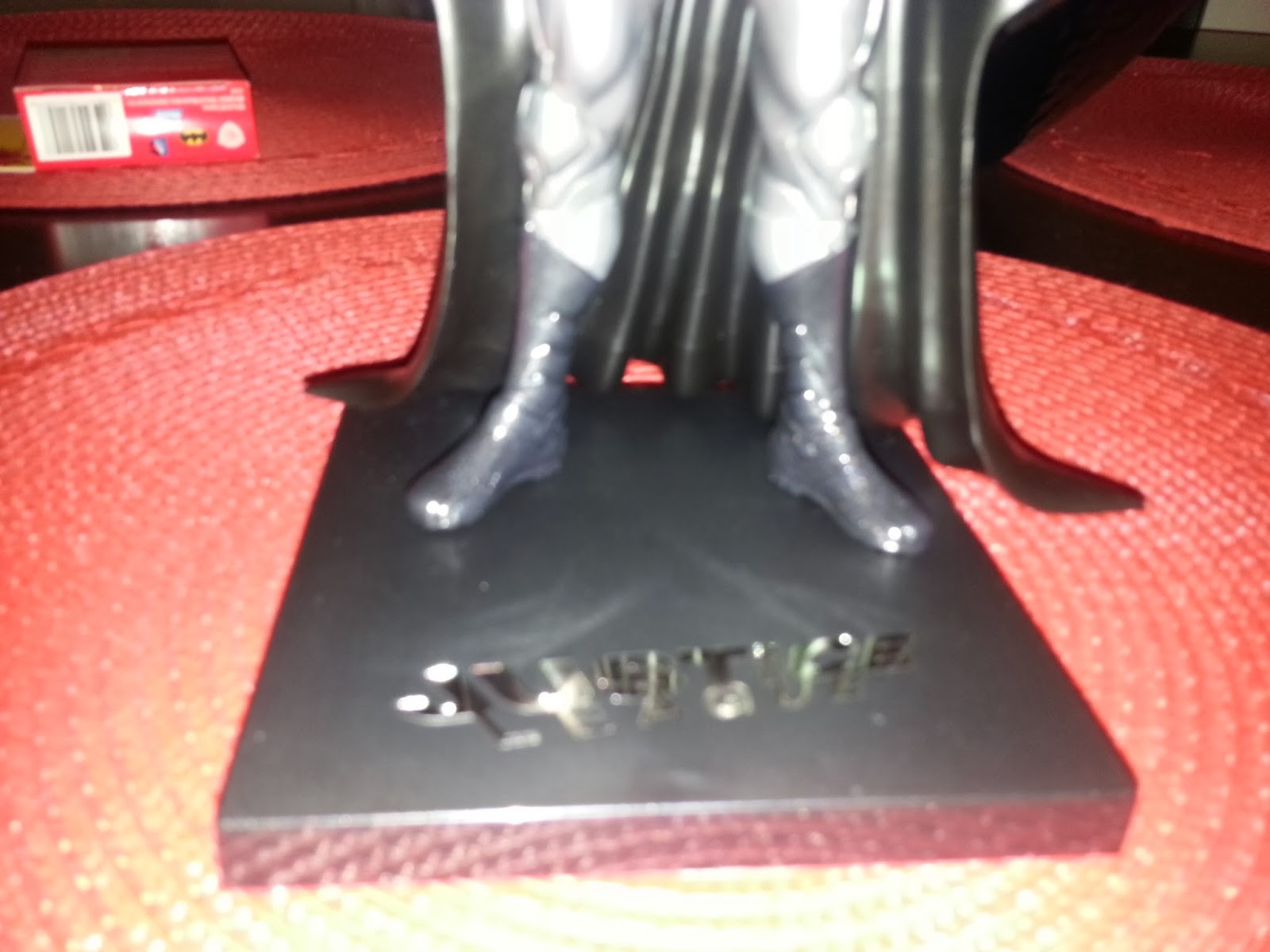 The base is a black plastic base that has Justice League imprinted into it. 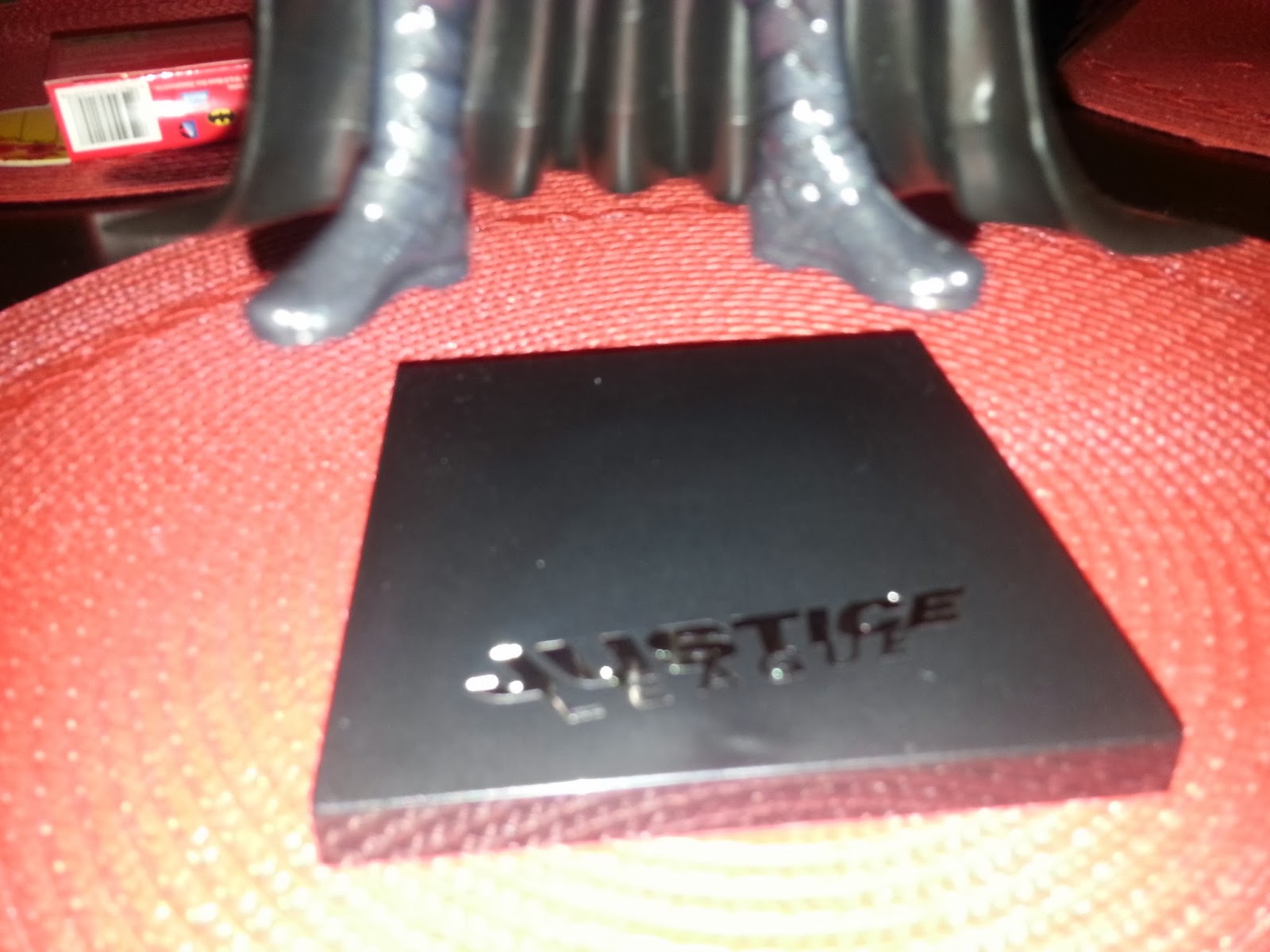 Here's a better shot of the base. 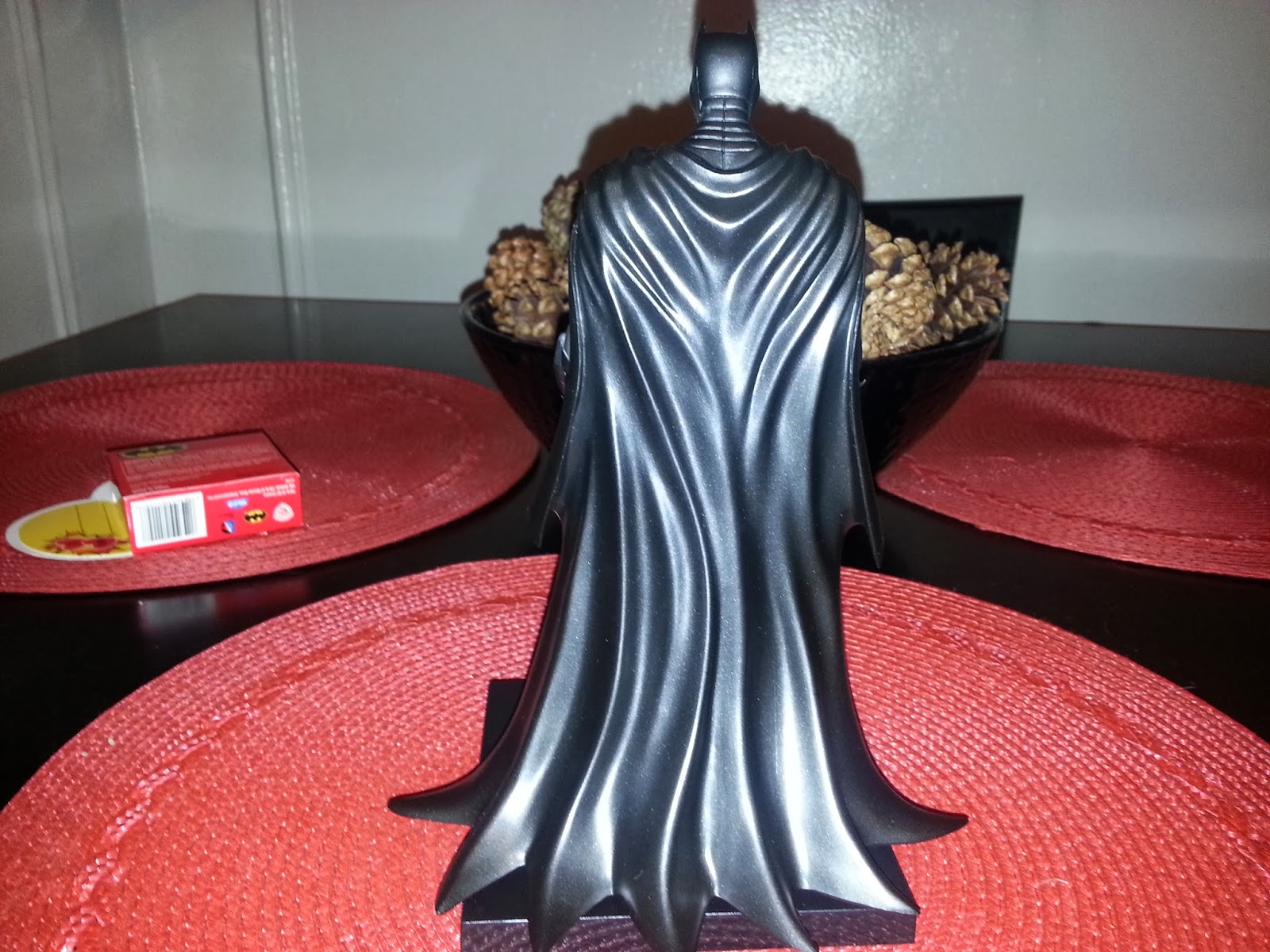 Check out the back of the statue. Look at the detailing on the cape and the back of the cowl. Fantastic. The cape is made from a black plastic, but it detracts nothing from how awesome this looks. 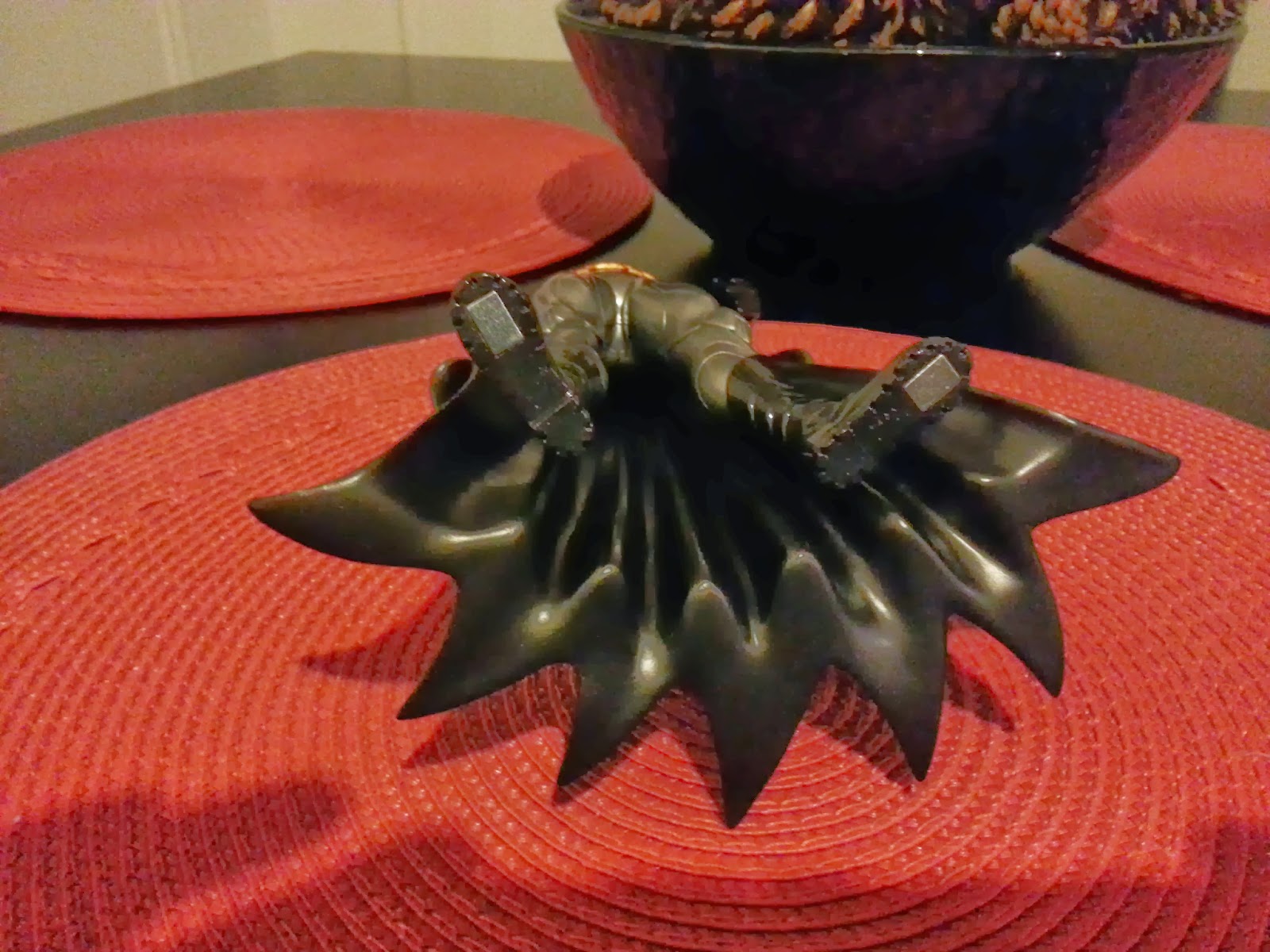 Now, if you didn't know and was asking how the statue stood up, you can now tell from the picture. Most statues has pegs in the bottom of their feet and the peg would go into a hole on the base. Not this statue. It has magnets on the bottom of Batman's boots. That leads me to believe that there is a piece of metal inside the base for the magnets to attract itself to. I think it's pretty cool. It's different, I will give you that. I do think a peg would be better.

Overall, I think my girlfriend knocked it out of the park with this awesome Valentine's Day gift. Plus, it is my very first Batman statue and I cannot thank her enough for it. But, to be honest, my very favorite gift was not the Batman statue. It was Gina coming all the way from the warmth of the California sunshine to the cold and snowy temperatures of New York City. Now, if that isn't love then I don't know what is. 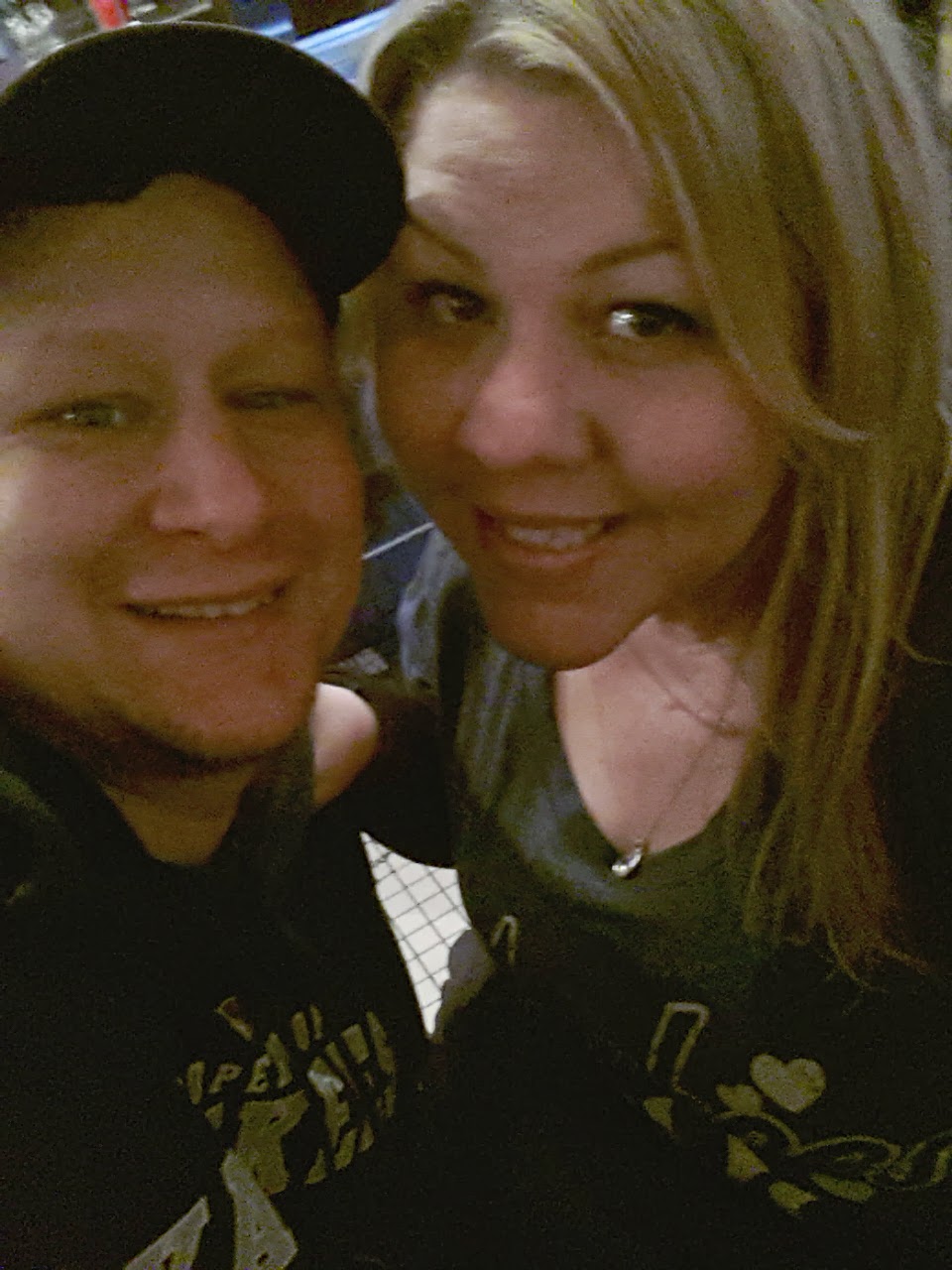 Happy Valentine's Day. Thank you for spending it with me.
Posted by Yankeejetsfan at 12:41 AM