My Spider-Sense Tingles At The Latest Hake's Auction

Thanks to Brian at Cool And Collected for tipping us bloggers off to the newest Hake's Auction. I always look forward to Brian's challenge to "shop" at a Hake's Auction. Hake's always has some of the most drool worthy items to bid on and as usual, Hake's did not disappoint in their latest auction.

I drooled over their Beatles listings, made weird, unmanly noises over their vintage Batman and Superman goodies and I even went koo koo for the Yankee Stadium seats, but as soon as I saw this challenge, I knew just exactly what I would be looking at. If you don't know, then you haven't been paying attention to my last few months of blog posts. 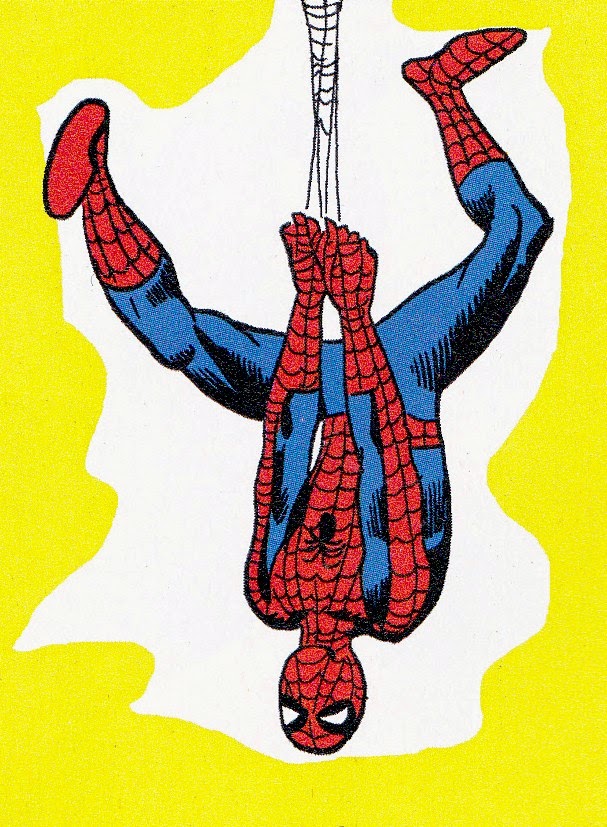 One of the parts of my collection I want to expand on is my Spider-Man comics collection. There is hardly any vintage in it and I found some beautiful books that I would love to add. 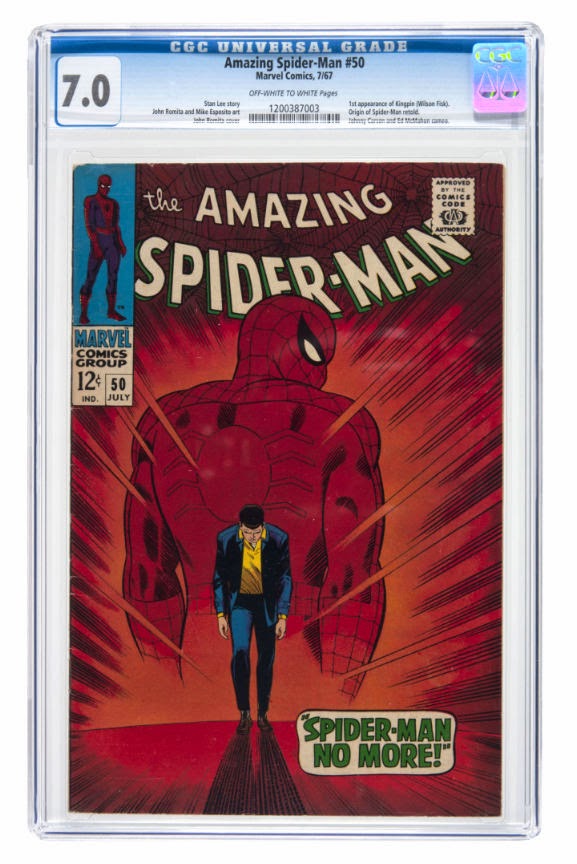 This issue of Amazing Spider-Man #50 would be a great addition to any Spider-Man collection. In this issue, Peter Parker decides he's had enough with getting no respect from the people he saves and from the New York City Police so he gives up being Spider-Man and throws the suit in the trash. A kid finds the suit and gives it to J. Jonah Jameson. This issue also marks the first appearance of the Kingpin. The cover is one of the more iconic covers in comic book history and was one of the basis of Spider-Man 2. 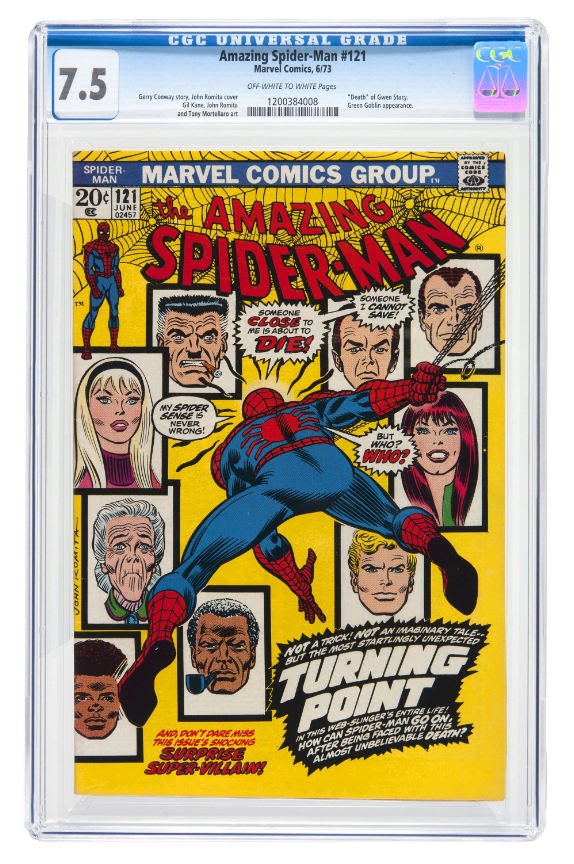 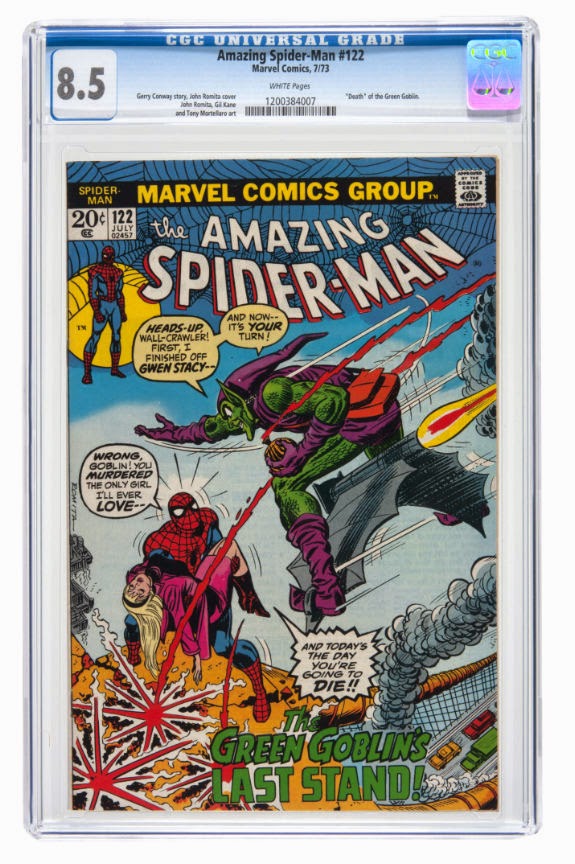 No Spider-Man comic collection can be considered complete without two of the most powerful issues in the history of Spider-Man. Issue 121 is the issue that shocked readers and changed the life of the Web Head, the ramifications which is still being felt to this day. If you don't know why this issue is so special, it's the issue where Gwen Stacey dies. Still to this day, it's not known if she was dead already when Spidey found her or did he accidentally kill her when he caught her with his web, causing her neck to snap back. One of the most heartbreaking panels in all of comic book history is when Spider-Man realizes that despite his best efforts, he did not save Gwen and he is holding her in his arms.

Issue 122 is just as poignant to me because even though Spider-Man vowed to kill the Green Goblin and cam within a blow of finishing him off, Peter turns his back on the Goblin because he realizes that even though the love of his life is gone, he is no killer and refuses to cross that line. The Goblin, however, tries to use his glider to kill Spider-Man, but misses and impales himself, supposedly killing himself. Of course, The Goblin would be back many, many times over the years to torment Peter Parker, but these two issues were the stories that changed the life of Spider-Man forever. Also, Gwen is one of the few characters that has stayed dead and never came back to life.

One of my other hobbies is collecting cards. I usually collect sports cards, but when I saw this listing for a set of 1966 Donruss Marvel Super Heroes cards, I knew it would an awesome way to satisfy my Spider-Man and vintage card craving in one swoop. Plus, the display box it's self would look great on a shelf with the rest of the vintage Spider-Man goodies in my collection. 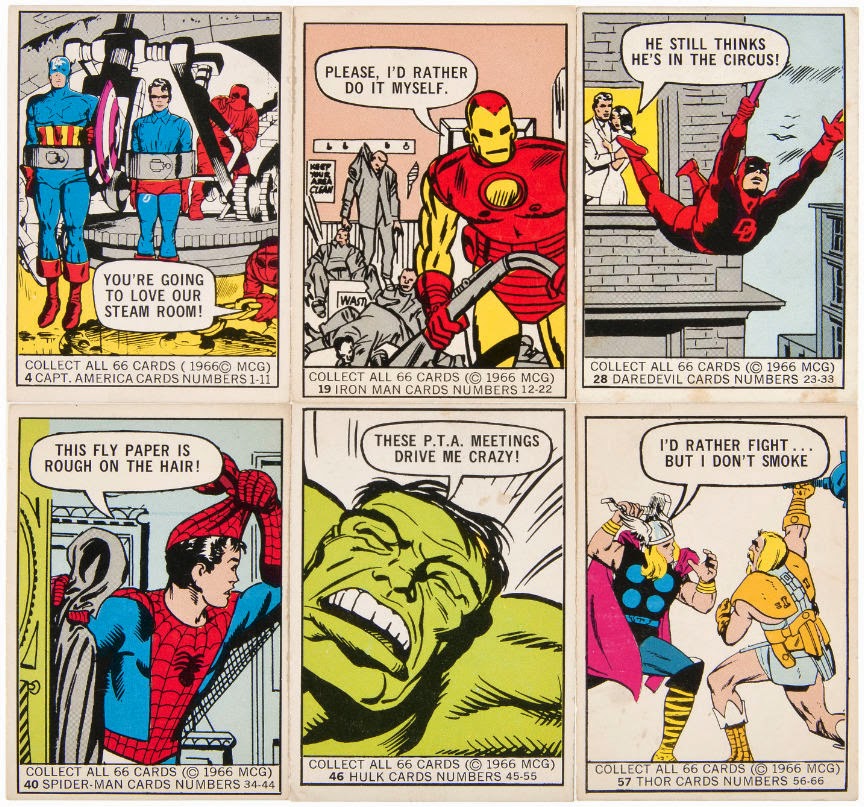 These cards are fantastic and would look so cool in a binder. I could flip through those pages filled with this beautiful artwork over and over again.

I love buttons and have always wanted to start a collection of vintage buttons. This lot would be a great way to start that collection. The only way to get these button were to order them from the 1969 Marvelmania catalog. These button all look to have been drawn by Jack Kirby which make these the more beautiful. Even if he didn't draw these, they look close enough for me and I'd want them. Especially that Spider-Man button.

Last, but not least, I wanted something I could frame and hang up on my wall and after looking through various lots, I think I found the perfect item. 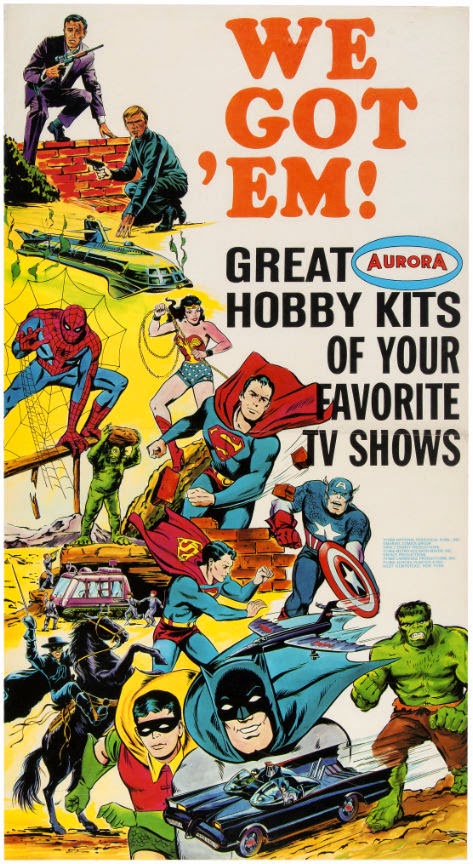 This 1966 Aurora Model Kits retailer sign is perfect because not only does it feature Spider-Man on it, but there are also a few other characters that make the Sexy Geek go all ga ga for like Batman and Robin, The Man From U.N.C.L.E, Superman, The Hulk and Captain America. This piece would be framed and proudly be displayed in the House Of Swag because Lord knows I cannot put together a model kit to save my life.

There was so many other items I would love to pick up, but the ones I displayed here are the ones I would place bids on if I could afford to. It saddens me that I won't be able to place a bid as these are some of the more expensive items in the auction. Maybe one day when I hit lotto or my rich uncle leaves...wait a second, I don't have a rich uncle. OK, scratch that one out. My point was that even though I won't be able to afford any of these anytime soon, I can dream that one day they will belong to me. Until then, I will continue to live vicariously through those who can afford them.

If you want to try your hand at writing for the League Of Extraordinary Bloggers, visit this link and join the club: http://coolandcollected.com/this-weeks-assignment-from-the-league-hakes-auction/

While your there, check out the blogs of my fellow League members: