Today, I was able to meet up with Andy Matz, who I met on the Spawn boards. He has a collection of bobbleheads, McFarlanes and Starting Lineups that would make even the most experianced collector swoon. He has most in his office in midtown Manhattan, which is where I met up with him this afternoon. After inviting me to sit down (on a seat from Dodger Stadium no less) we talked about bobbles.
He's been collecting them since the late 80's. It was a progression that started from his collecting of Kenners Starting Lineups and grew from there. He has just about every bobble you can think of from stadium give aways to retail. He has just about every team in baseball represented. also has a nice collection of hockey bobbles. I think I might have seen some football as well. His collection of Starting Lineups as well as his McFarlane Sports Picks also took up residency in his office.
Some of the nicer bobbles were the stadium give aways. I saw a bobble sporting the old Toronto Blue Jays powder blues, a Roberto Clemente, a very nice Joe Torre Dodger bobble and a Mr.Met that caught my eye. His collection of McFarlanes were no less impressive as it seemed like he had every single one on his walls, including the Team Canada figures, the boxed sets and a lot of baseball. He even showed me some autographed Starting Lineups signed by Darryl Strawberry and Willie Randolph.
He reached out to me when I posted a thread on the Spawn forum asking if anyone had any bobbles of teams I collect. He had replied and told me he had three I might be intrested in. A Mariano Rivera Yankee Stadium SGA, a Jason Giambi Yankee Stadium SGA and a Hideki Matsui Trenton Thunder SGA. We negotiated a price and I went to pick them up today. When I went to pay, he told me they were on the house. He wanted to help jump start my bobblehead collection. I was overwhelmed by his generosity. Andy, If your reading this, I'd like to thank you again for your hospitality, your time and generosity.
Now, on to the bobbles 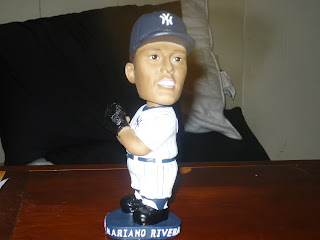 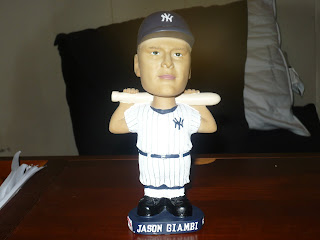 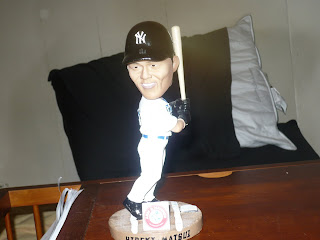 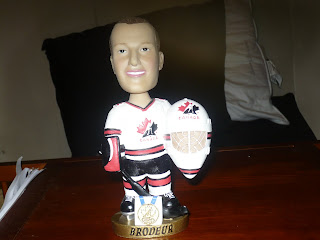 Now the rest of my collection 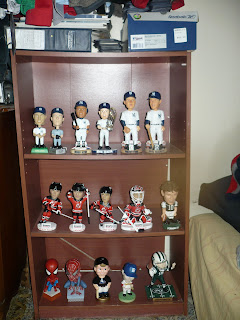 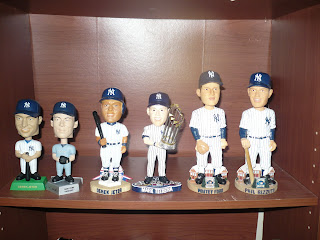 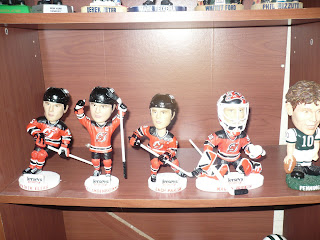 From left to right; Patrick Elias, Jamie Langenbrunner, Zach Parise, Martin Brodeur, Chad Pennington training camp give away. The Devils Bobbles were part of a partial plan. Bought tickets to 4 selected games and you got the set free. Looks like not a lot of people bought them so they sold the set in the team stores then gave them out during game one of the playoffs. 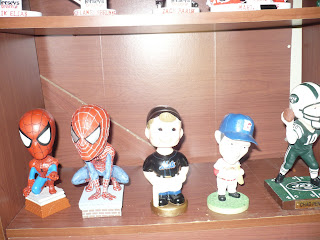 Here's my goal. I want to collect as many bobbles from my teams (Yankees, Jets, Devils and Knicks) as well as a HOF collection. I also will pick up a bobble from every stadium, arena and park I visit. If I could have a collection that comes halfway to Andy's, then I'd be a very happy camper.

Posted by Yankeejetsfan at 12:45 AM