Why Is This Man's Autograph So Hard to Get? 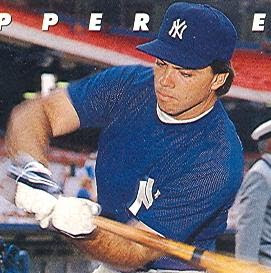 This, my friends, is Matt Nokes. He is a former catcher who's played with Detroit and The Yankees, most notably. He was a good catcher with some pop in his bat. He once hit 32 home runs for Detroit. he never equaled that amount, but was still good for about 20 home runs, he averaged 16 in his 3 plus years in NY. He also played with San Fransisco, Baltimore and Colorado.
I had found out he was a coach in the independents last year, I forget for what team now. I sent a letter and never recieved a response. Last week I track him down to the Potomac Nationals, where I had heard he was a coach. I check the team website and sure enough he's listed as their hitting coach. I write a quick letter and send my card to the team address I found on their site. Yesterday, I get the letter back as an RTS. The post office claimed the address is unknown and there is no forwarding address. Hmmmmmmm.... Not sure if that's correct. I'll have to check again and resend it out. This is strike two, but I'm no easy out. I'll keep trying till I get his autograph into my Yankees PC. Stay tuned dear readers.
Posted by Yankeejetsfan at 8:54 AM