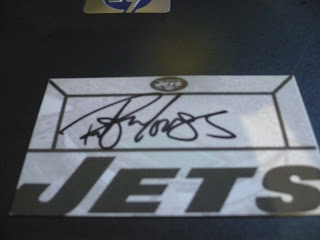 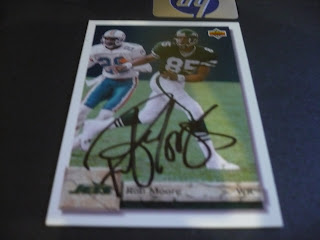 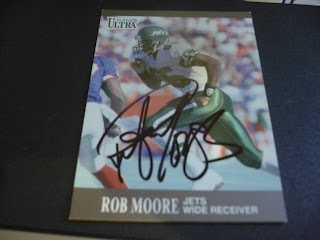 Friday bought me former Jet and Cardinals wide receiver Rob Moore. The Jets selected Moore in the 1990 Supplemental Draft and was a Jet from 1990 to 1994. His best season as a Jet was 1994 when he caught for 1,010 yards with 58 receptions and 4 TD's. He made his first Pro Bowl but left the Jets after that season and went to Arizona where in 1997 had his best year when he caught for 1,584 yards with 97 receptions and had 8 TD receptions.He made his second Pro Bowl and first All Team All-Pro. He is now the wide receivers coach at Syracuse. I sent the cards there and got them back in 10 days. Great addition to the Jets collection.
Posted by Yankeejetsfan at 2:40 PM