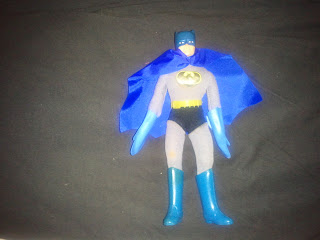 I've been wanting to show off my Mego collection for sometime, but never really got around to taking picks of the collection. I was to yesterday after seeing an episode of Comic Book Men where someone bought in their Mego Collection to sell that I finally got my Megos out and snapped a couple of pics. Not to pleased with the pics, but I'll do better before next week's Mego blog post.

This week, I show off The Batman, my favorite Mego. Spider-man is my favorite hero, but Batman is the absolute coolest hero Mego made. I mean, what's not to like about this bad boy? The cowl is awesome, the cape is cool, the emblem, belt and boots all rock like a hurricane. Ok, I can do without the oven mitt gloves, but as a kid, this was a must have for me. I remember playing with Batman for hours in my room with all my other action figures. And that was just last week.

I would like to say this is my original Batman from when I was a kid, but alas, it is not. I bought this in 2002 at the Big Apple Comic Con, back when the convention was in the basement of a church in the west 50's in Manhattan. the outfit, belt, and boots are original. The cape and gloves are repos bought from Dr.Mego, who had a booth set up there as well.

The figure is pretty cool, but I would like to upgrade at one point to a figure with all original parts and accessories. But finding one is hard. Especially without having to break the bank for one. I don't mind buying them loose as they display so nicely on a shelf.

The cool thing about Batman Megos is the stuff Mego released to go with the figure. Displaying the figure with a Batmobile or a Batcycle on a shelf wouldlook fantastic. Or, if you have the room and cash, you can pick up a Batcave to display. For those in a higher tax bracket, a Wayne Foundation might just be up your alley. Either way, you have a lot of options on what to pick up to display with your Batman and you can't go wrong either way.

I will admit that I do look at this figure and think back to my childhood and remember how much I loved this figure as a kid and how much I love it as an adult. But that's why I collect. I love feeling how I did as a kid and finding joy in something so simple as a action figure that is more than 30 years old is something that keeps me going everyday. When I feel like that, then I know I'm doing something right and that's all that counts.
Posted by Yankeejetsfan at 7:14 PM