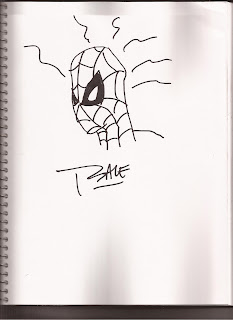 I had never even thought about starting a sketch book until I saw some other comic fans collections on various sites. I saw some amazing pieces drawn by some of comics top artists and some drawn by unknown artists who will probably have a shot at drawing for Marvel or DC at some point.
I started asking collectors how to start one and how much the various artists charge at comic cons. I learned that most artists will charge anywhere from 20.00 and up, depending on who the artist was. Plus, it was best to grab the artist early for the sketch as he might get a lot of appointments and have but so much time to do them.
Armed with that information, I stopped by Staples and picked up a sketch pad. The next day I was headed to the big one, New York Comic Con. And I had already picked out the artist I wanted my first sketch from and I knew I had to be one of the first people there too.
Tim Sale drew three of my favorite graphic novels; Batman, The Long Halloween, Batman, Dark Victory and Spiderman Blue. Having learned he was doing free sketches for about an hour, I made a bee line for his table as soon as I got in. He had not arrived as of yet, so I wated on a short line till his arrival. When the line started moving, I noticed I was the only one with a sketch pad. Everyone else was having comics signed, so I got to his table rather quickly. I told him I loved his work on Spiderman Blue and asked for a Spidey sketch. He was really nice and sketched the piece you see above. I also bought an awesome black and white lithograph of Gwen Stacy and Spidey, signed by Tim. That I will have framed and hung up as soon as I can.
Not sure about the sketch though. Do I hang it up, framed or leave it in the book? I'm almost leaning toward framed and hung, but since I have the litho, I might keep it in the book. We shall see.
Now, I need to pick out my next artist for my next sketch. Can't wait.
Posted by Yankeejetsfan at 11:39 PM