New Assignment from The League

One of my favorite pop culture blogs to read is Cool and Collected written by Brian Adams. No, not the Canadian pop singer. I actually like this Brian Adams. He's into King Kong, Planet of The Apes and other monkeys, what's not to like?
Anyway, he started up a group called the League of Extraordinary Bloggers, which I made sure I was a part of. Anything that has to do with blogging about pop culture and collecting toys and other memrobilia, I was there.
Each week, Brian will give us a topic and we League members have to come up with a blog that fits the topic. Last week was what we considered to be the best popcorn movie, which I picked 1.21 gigawatts of fun with Back To The Future. This week's topic, With unlimited space and money, what piece of Hollywood memorabilia would you want in your man cave. To me, the answer is pretty simple. 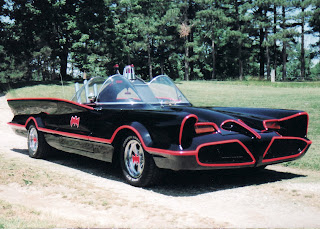 Anyone who has read my past blogs knows how much I love the 1966 Batman series. If I could afford one, I would absolutely own a Batmobile from the show. To me, it's an iconic part of american pop culture. The Batmobile was designed and created by George Barris, who used a 1955 Lincoln Futura to build this masterpiece. I'm not a car person, but that car makes my heart jump each time I see it.
A car like that would have to be driven at least once and only once. Just to show off or fight crime (Hey you, put that grape back!) or pick up women (How You Doin?). I guess I'd have to build a Man Cave big enough to house it. Heck, maybe I'd actually could have a man cave similar to the bat cave from the series. 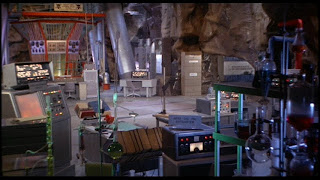 A place for my Batmobile, check. A place for all my toys, baseball cards, autographs and other goddies, check. 70 inch HDTV, blueray player, video games, check. English butler to bring me snacks and to tell me when the Commissioner is calling about yet another super villian is causing problems, check.

Ok, time to start making my first million so I can make this happen.

Posted by Yankeejetsfan at 7:51 PM