For this week's assignment, The League had to post which of their possessions is considered their most prized. Which would be the one thing that you would fight off a couple of killer ninja's for, or run into your burning home to retrieve or fight Freddy, Jason, Preditor, an Alien, Mike Myers and Adam Lambert over. For me, this was a pretty easy one.

No, dear readers, it's not a Spidey object or one of my Batman Megos or my Patrik Elias game used hockey stick. It's not anything from my Beatles, KISS, Monkees or Back To The Future collections either. This one item is something that can actually fit into my pocket so I can attempt to grab a few more things if need be. Heck, this is something I think EVERYONE would consider a prized possession. 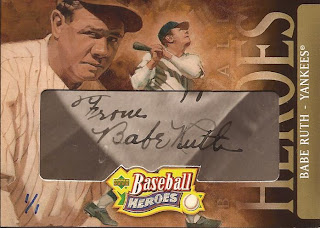 For your consideration, I give to you my most prized possession. A Babe Ruth cut autograph from the 2005 Upper Deck Baseball Heroes set. I actually bought a tin of the product at a card show a few years ago. I went on line to get an autograph and decided to bust the tin. I was looking through the cards, saw the Ruth and actually passed it by thinking it was an insert. When I didn't get the 1 autograph I was promised, that's when I realized what I had. I went back to the card and looked it over and indeed, it was a cut signature card of Babe Ruth.

To say I was overjoyed would be an understatement. I was doing cartwheels, jumping jacks, running in place and whooting at the top of my lungs, drawing weird looks from people. Ok, I didn't do that. I did allow myself a Holy S#%t! The guy next to me saw what I pulled and said "This guy pulled a Babe Ruth Autograph!" A couple people asked to see it and congradulated me over the pull. I had a few offers for the card right there and then and I turned them down.

I didn't turn them down because the offers weren't high enough. They were plenty high. I turned it because I never really thought I would be lucky enough to ever own a Babe Ruth Autograph at any point in my life. As a Yankees collector, it's the Holy Grail of most Yankee fans and to say I own a Babe Ruth auto is actually something else. Plus, it's something that I would love to hand down to my son or daughter if I am ever lucky enough to marry and have a child.

So, I would let my Spider-Man Comics go up in flames. The Warlocks can take away my collection of Batmobiles and Dr. Doom can steal my Beatles Yellow Submanrine figures. The Babe Ruth? That's coming with me. Big Whoop. Wanna fight about it?
Posted by Yankeejetsfan at 12:24 AM