Some New Adds To My Jets PC

This week I was able to add to my New York Jets PC, which I had been neglecting as of late. The adds were in form of a ttm autograph, which kicked off the start of a project I will be working on as well as a late xmas gift from my buddy.

Last year, a coffee table book called The New York Jets: The Complete History was released. When I saw it, I knew I wanted it. 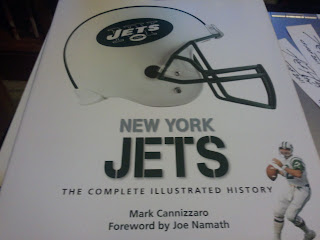 It looks like a decent read and it has some great pictures, many of which I hadn't seen. My friend Mark, who has a similar book about The Mets, suggested I do what he is doing. Mark, also an autograph hound, is trying to get all the players featured in The Mets book to sign the page that they are on. He's doing a very good job with it. He has a lot of signatures in that book. But I wasn't sure I wanted to do that.

For one thing, not a lot of former Jets make as many apperances as the former Mets do. To get that book signed would be a difficult task. And two, how do you display it? I had done this with a wrestling photo book in the 90's to great success. Only problem is I can't really display the pics I got signed. And I have some good ones. Ric Flair, Lex Luger, Kerry Von Erich, Owen Hart, Davy Boy Smith, to name a few. Cant really display the book. Just allow people to flip through the pages to see the autos. Plus, I really didn't take care of the book. The outside is in rough shape. I won't take the pages out to display though. Rough shape or not, it will stay as is. It's one of my most prized possessions and will stay as is.

Then, an idea came to me via youtube. One of the guys I sub to, Bloodspawn, is working on a Dallas Cowboys book where he is sending book plates through the mail and sticking the plates by the player's picture. Brilliant idea. I just can't do that with this book as there is no room. It's a history of book and theres a lot of text in this book. So, I came up with another idea. I would send the players labels, have them sign that and I'd stick the lable inside the cover. If I ever see a player who is in the book, I'll have the player sign his page, but for now, ttm'ing is the way to go. So I decided to test it on a player I know signs and it worked like a charm. 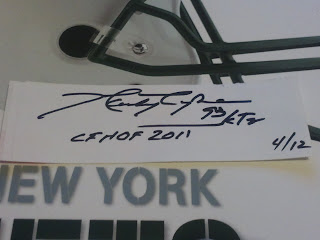 Former member of the famed New York Sack Exchange, Marty Lyons, signed the above label/book plate in about 5 days. Once I got it, I stuck it inside the cover on the first page like I planned. 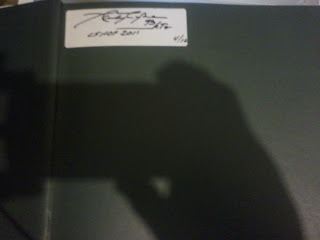 I think it looks great. Plus, there is enough room on the page where I can have 2 rows of autographed book plates, right next to each other going down the page. Oh, and I got something else signed. 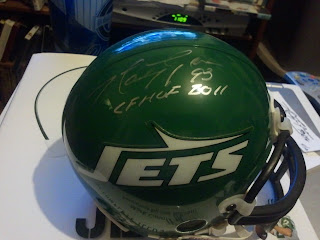 Mr. Lyons also signed my throwback mini helmet in silver sharpie. Looks better in person than how it looks on the picture, I promise. Still, I wish I had sent a paint pen instead of a sharpie, especially since he returned the Sharpie.

My other add to the New York Jets collection is something of the vintage variety. I love vintage stuff when it comes to the Yankees, Jets, Spider-Man and Batman. I wish I could afford to buy more. I am always thrilled when I can find a deal on something older to add to my collection. If it's free, even better.

My buddy Mark (there he is again), gave me a late christmas gift of something I had been eyeballing on ebay for a while now. He found it in a flea market for dirt cheap. 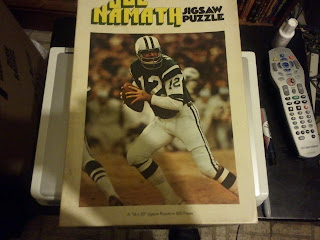 He got me this vintage Joe Namath puzzle. It was something I have wanted for a while and was absolutely floored when I saw it. I don't have a lot of Namath collectables in my collection, save for the autographs I have, either certified card or IP. Ever since I watched the HBO documentary this past winter, I have wanted to get some of Namath's merchandise for the Jets PC. This puzzle was one of the things I zeroed in on.

I love the simple lettering, plain white background and pic with the Jets logo airbrushed out. 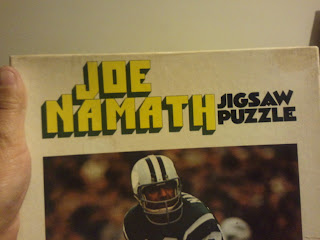 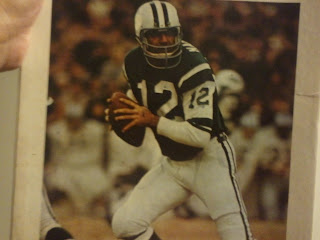 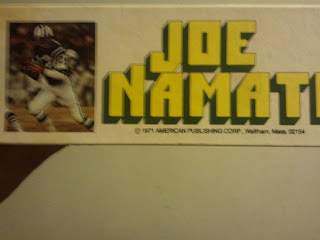 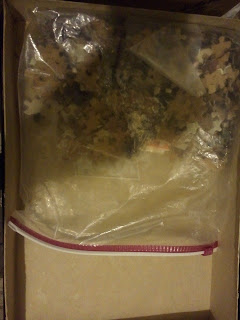 The seller told my buddy that all the pieces were inside the baggie provided.


The box is a little beat up with some stains and dents, but I don't care. It's mine, mine, allll mine! mwhahahahahaha!...excuse me. Got a bit carried away.

Anyway, it still looks great for displaying purposes once I get a cabinet to display all my Jets goodies in. And believe me, I will be displaying the box along side my signed mini helmets, figures and other Jets suff I have gotten over the years.

The Jets have some real nice vintage stuff out there that I would love to get my hands on. From programs to yearbooks. Pennants to pins, I want it all. My love for Gang Green is almost on level with my feelings for the Yankees. I go back to 1980 with the Jets, when they were still in Shea Stadium. I might be the only Yankees fan who loved Shea. Because of my Jets, my first game at Shea wasn't even a Mets game. It was a Jets game.

So, now that I can cross the puzzle off my list, I can go back to trolling on ebay for other vintage Jets items I can add to the collection. Excuse me. I can hear the "bay" calling.

Posted by Yankeejetsfan at 11:55 PM