After I got off work today, I stopped in at Forbiden Planet, which is a comic shop in Manhattan. I stop in from time to time to check out their selection. I usually shop at Midtown Comics, but sometimes I find a gem or 2 to take home. Today was one of those days.

Originally, I spotted the Marvel Select Iron Man Avengers Movie figure and drooled. I have to admit, Iron Man has grown on me since I saw the first Iron Man movie and I have been wanting to start a small Iron Man collection  for sometime and thought this might be the first addition to start that PC. Then I saw this on a peg 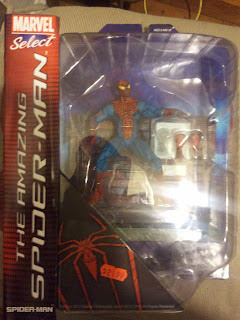 So this was the gem I took home. I'm pretty sure I will be picking up that Iron Man figure next week.

Once I got home, I turned on the Yankee game and saw that Andy Pettitte gave up 5 runs in the 1st inning. I turned to opening the figure to find some joy. 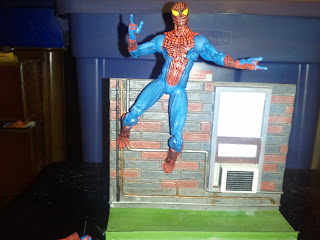 For the 1st shot, I put him on the wall that came with the figure. Is there such a thing as too much articulation? The darned thing won't stand up on its own. 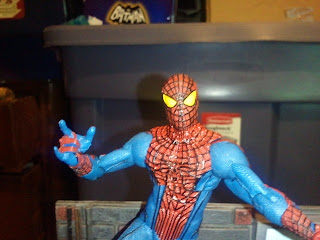 Close up of the head sculpt, which is pretty nice. Just don't like the yellow eyes. Makes Spidey look like he's sickly. 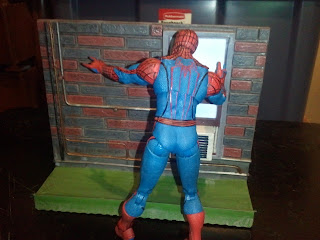 To get this view of his back I had to prop him up against the wall. Couldn't get his body stiff enough to stand on it's own. 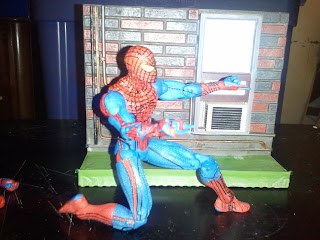 On the plus side, he's pretty poseable as long as he's not standing. Pew, pew! 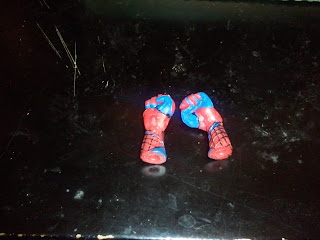 Figure comes with an extra set of hands which is a bitch to change. Not sure why they chose fists. Open hands would have been a good call here. With the articulation this figure has, he could be crouched down in a classic Spidey pose if he had the open hands. 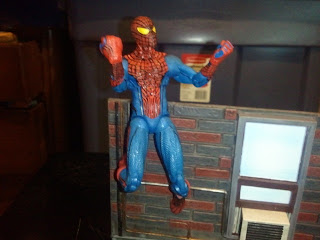 This will probably be the only figure I pick up from the movie line. I hate what they did to the classic costume and really don't see the need to add any other figures from the line, although if a 8 inch figure is released like were released with Thor, Captain America and The Avengers I might be persuaded to grab that. I knew I was picking this figure up when I saw it in Previews a few months back.

The figure has more articulation than any other figure I've ever seen before. The paint job and sculpt is very well done. I would have liked there to have been a stand at the bottom of the wall with pegs there as well so he could have been posed standing rather than just on the wall. A pair of open hands would have been great as well either with the set of fists or instead of.

It's a well made figure with just a bit too much articulation. Granted, I usually dont have a figure that has a moveable pelvis, so maybe I'm not the best authority on the subject of articulation. Putting aside my strong dislike of the costume, I'll give this figure a thumbs up and say it would be a great addition to any Spider-Man collection.
Posted by Yankeejetsfan at 11:06 PM