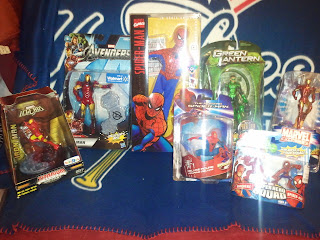 Saturday I actually started off going to a card show in White Plains with my buddy, George. After only picking up a couple cards, we left the show and hit the road in search for some geeky goodness. Toys, Toys and more Toys. And there were deals to be had on this day. 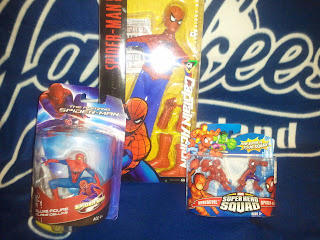 Let's start with some new additions to my Spider-Man collection. One of my dreams is to own a 1960's Captain Action Spider-Man Figure. Now, maybe I'm shooting a bit too high since that particular figure is one of the most expensive figures for a Spider-Man collector to add to their mantle. So, I found the next best thing: The new Captain Action Spider-Man Costume Set. I love this as it is very John Romita-ish in the way it was made. From the mask to the outfit, once I put it together, I'm sure it's going to look like it jumped out of the pages of a John Romita drawn/Stan Lee written comic. Once I get the Captain Action Figure, I will open it and display this with the rest of my Spidey goodies.

Then I got some great deals in Marshalls on the Amazing Spiderman PVC Figure (3.99) and the Superhero Squad Spider-Man & Daredevil set (2.99). On a normal day, that is a great haul, but I was not through finding bargins. 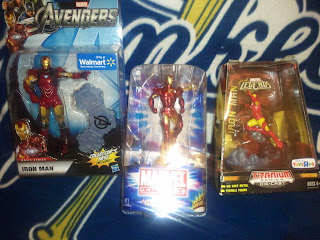 My Iron Man collection got bigger by three additions. Now, I did pay full price on the Walmart exclusive Avengers Iron Man figure, but Toys R Us had some great deals and I was able to add two cool Iron Man pieces for under 5.00. The Marvel Legends Titanum Iron Man piece was 1.49 while the Marvel Universe Avengers Iron Man was 2.99. At those prices I was pretty much like, Yes please. I picked these up at the Toy R Us in Jefferson Valley, NY, along with the Captain Action Spidey. The register clerk was trying to get me to buy more Spider-Man stuff. I never had a register clerk try a sale, nevermind the hard sale this guy was pushing. Sponges, candy and some of the other Spidey figures was what he was hawking. My buddy said he should have offered them for free if he wanted me to take them so bad. Then finally, I ended my geeky shopping spree by picking up the Hal Jordan Green Lantern Movie Masters figure from Marshalls for 3.99. Then we hit a 5 Below near Jefferson Valley and I snatched up the 2 disk Special Edition Batman Returns dvd set. I previously picked up the Batman 2 disk set because I wanted the special features that the previous releases didn't have. I enjoyed them so much that I decided to get the rest. When George alerted me to the dvd, I naturally grabbed it. 2 down, 2 to go.

Overall, Saturday was a huge sucess, toy-wise. I was able to add to my Spidey and Iron Man collections while adding my 4th Green Lantern figure and adding to my Batman dvd collection for less than 50 bucks. I didn't break the bank, yet I went home with more bags than I normally do.

Saturday was one of those days that we toy collectors dream of. It was a good day to be a geek.
Posted by Yankeejetsfan at 11:37 PM