I have been a huge, ginormus Beatles fan ever since I was about 6 years old. I got into them through a friend who was a little bit older than me. I remember that year I had started listening to records (google it kids), singles in fact. I wasn't listening to anything that current. Most of the records my friends and I were listening to were songs like I'm A Believer, Sunshine Superman, Cracklin' Rose and Lola. I had a friend, Mark Fioritti (Sorry if I mispelled your name Mark) who played me a record that had an apple on the label. It's funny I remember the apple. I think it was because I hadn't seen on on a record up to that point. So, the first song he played for me was Hey Jude and from that day on, I was obessed with The Beatles.

Growing up, I read every book I could get my hands on about them and listened to all their albums, repeatedly. I remember working I was working at the Fordham Public Library the day the CD's were released. I rented Please, Please Me and With The Beatles and ran home with them. I remember I was beside myself when I first heard Paul, clearly, counting up then the opening of I Saw Her Standing There followed. It was awesome. I had a poster on my wall that a friend gave me for my birthday of the Beatles through various stages of their career and I have been looking for that poster on ebay for the longest time.

As I got older, I picked up various DVD's, books and other Beatle goodies. I wanted to take this week and show off various parts of my Beatles collection. It's actually very small, a lot smaller than I care to admit. But that's the beauty of a collector, you can always add to it and grow it as large as you would like.

So today, I wanted to show off my 3 Beatles Enesco figurines. These were released back in 1993. They made figurines of all four Beatles on black lacquered stands and an album cover slotted behind the figure on the stand. I got these three figures as a gift from my buddy, George. Don't remember if they were christmas or birthday presents. Very cool pieces to have in my Beatles collection. 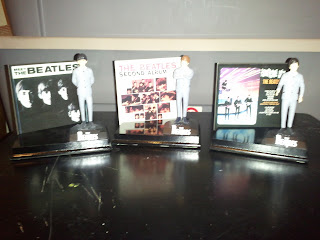 Sorry about the flash on some of these pictures. But here is a shot of all three figures together 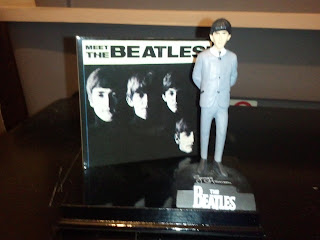 Here's George with Capitol's Meet The Beatles album cover. This was the album that introduced America to the Beatles in 1964. 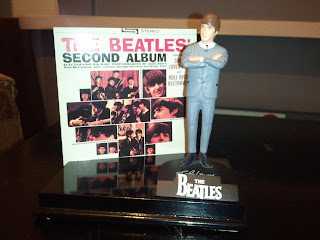 This one is my personal favorite for two reasons. One, John was my favorite Beatle and two, The Beatles Second Album was one of the very first Beatles albums I purchased with my own money. I remember going into Alexander's on Fordham Road as a kid with my mom. We marched into the record department and I grabbed The Beatles Second Album and Help! and bought them with my own allowance money. It was a proud day for the young sexy geek. The only non Beatles album I also bought was The Police's Zenyatta Mondatta. It was 1980. I loved De Do Do Do, De Da Da Da. 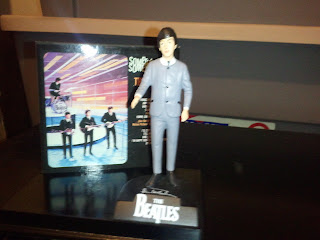 Here is Paul with the Something New Album cover. This might be the only Beatles album as a kid I never got to hear. By the time I started buying my own music, Apple was releasing the british versions of The Beatles albums and I just never got to listen to this record, but hey if you heard The Beatles singing I Want To Hold Your Hand in german on one CD, it really doesn't matter right?

I never could get Ringo. At first, he was pretty hard to find. Once I did find him, he was pretty expensive. I saw a listing for him on ebay recently for $150.00 and that's not money I can spend on one thing right now.

I have been on a real Beatles kick as of late. I saw a restored version of Magical Mystery Tour on the big screen recently, watched The Ed Sullivan shows that had The Beatles on them, watched A Hard Day's Night and have been listening to their music non stop. This band is timeless and their music never sounds stale. I had the good fortune of seeing Paul McCartney and Ringo Starr on their tours multiple times and will continue to see them whenever they come around.

I love other bands like KISS, The Monkees, Depeche Mode, The Cure, etc. None of these bands come close to capturing my imagination like The Beatles did and still do to this day. Whenever I hear their music, I am back at school, listening to their records on that crappy record player and pretending I'm one of the Beatles, singing to the records and playing air guitar. I have heard thier songs hundreds, if not thousands of times and never tire of hearing them. That's why I know I will be a fan for life. Now to find more stuff to add to my Beatles collection.
Posted by Yankeejetsfan at 1:17 AM