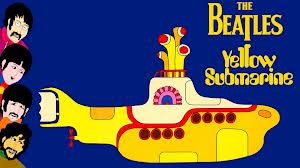 Today, I wanted to show off my collection of Beatles McFarlanes. What better place to start then the very first set that McFarlane released-The Yellow Submarine figures.

Back in 1999, McFarlane Toys comemerated the 30th anniversery of the release of Yellow Submarine with a set of figures. These figures are georgous and look great in any Beatles collection. If you can find them, I highly recomend that you do. 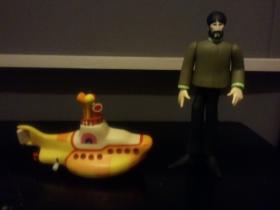 First up is George with the Yellow Submarine. It's all in the mind, you know. 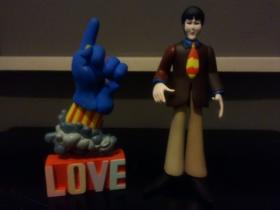 Next is Paul with The Glove and a Love base. There is also a Paul that was paired with Old Fred, which is the chase of the set. 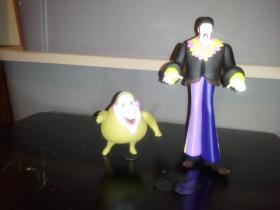 Ok, maybe I should have kept the flash on the camera off. Oh well, here's John with Jeremy. At both John and Jeremy's feet are holes. 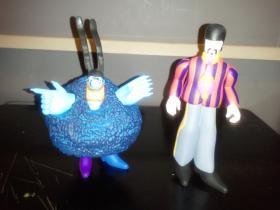 Finally, here's Ringo with a Blue Meanie. Yes, he was in this cartoon before he became a wrestler.

A couple of things. One, some of these figures are really hard to stand. I'm going to have to figure out how to display them once I finally get to put up a Beatles display. Two, I would have paired the figures differently. I would have put Ringo with Jeremy, John with the Blue Meanie, George with the Glove and Paul with the Yellow Submarine. I just may do this once I display them. I mean, it was Ringo who said "I have a hole in me pocket" in the movie, not John.

Again, I love these figures. McFarlane did a fantastic job with the sculpts. They look like they jumped out of the movie. I'm really pleased I own these, as well as Series 2, which I will show off in my next post.

Posted by Yankeejetsfan at 12:06 AM