What I Have Been Reading-World War Hulk 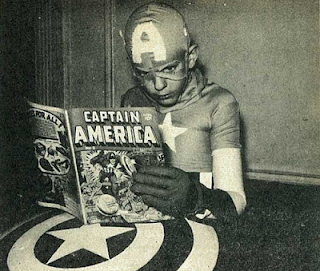 Once I finished Superman Secret Origins, I wanted to knock off another graphic novel I had on my reading list. Especially since I seen Planet Hulk. I say seen because I cheated and instead of reading it I decided to watch the movie on Netflix. Yeah, I know, Lazy. Now, I would knock off World War Hulk off my list and read it.

Like with Superman Secret Origins, I had planned to take the book with me and read on the plane ride to and from Los Angeles. Unlike Superman Secret Origins, however, I was unable to bring the book with me. Jim Haley's Universe didn't have it initally, but would get it for me the day before I was to leave for the west coast. Unfortunately, I didn't get the call from them that it was in the store until about 7 PM. By then, I was getting ready to take a nap since I had to be up and on the subway by 3 AM.

So, I didn't get to read it until I returned and after I had read the Superman book. That was fine. I had enjoyed Superman, now I was hoping that this book would be just as good as Superman was. Like Superman, I wasn't a fan of the Hulk in the comics as I found the stories a bit boring. This book, however, was anything but boring. 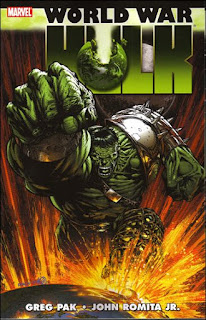 This book answers that age old question: What happens when you really piss off the Hulk? Well, Greg Pak with the incredible John Romita Jr. penciling, tell the story of a really angry Hulk who returns to earth to gain revenge on the people who banished him to the alien planet of Sakaar in Planet Hulk. His revenge is not just because he was sent away. He thinks that the responsible parties, Iron Man, Reed Richards, Black Bolt and Dr. Strange known as the Illuminati, also had a hand in the death of his wife and unborn child when the ship that transported him there explodes.

Before he gets to Earth, he makes a little visit to see Black Bolt. 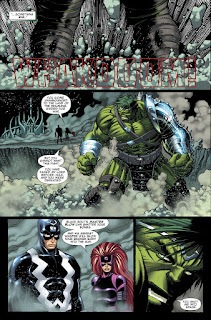 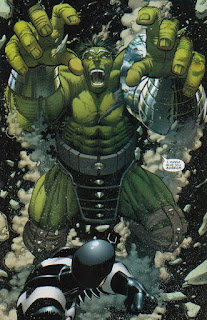 Not even Mr. McGee could make him this angry.

Once Hulk makes it to Earth, his intentions was to take out the Illuminati and anyone else who gets in the way. Hulk knows that he would have to face other heroes, so he doesn't come back alone. 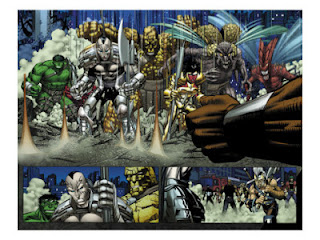 He brings along his Warbound gladiators back with him for back up. The thing is, as angry as the Hulk is, he really didn't need them. Along the way he would battle the Avengers, The X-Men, The Fantastic Four, Doc Samson, Gen. Ross and the US Army as well as a Zom merged Doctor Strange. Not to mention the epic confrontation with The Sentry.  He even transforms Madison Square Garden into a gladiatorial arena. Haven't seen that much fighting there since the beginning of last years Devils/Rangers game. 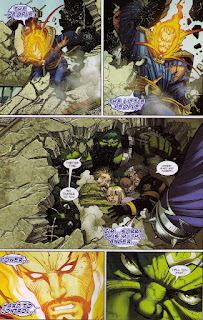 I don't want to give too much away here. If I have already, I apologize. No Spoilers here.

Bottom line, Pak writes a hell of a Hulk story and John Romita Jr. is John Romita Jr. The story is great as it gives The Hulk a reason for the rage. The action is incredible (no pun intended) and intense. The ending is a bit of a shock, but it's the icing on a rage filled green cake. If your a fan of the Hulk and you have not read this yet, I think you need to. If your looking for a good Hulk story, but not so much a fan of the character, this book along with Planet Hulk might convert you into a fan.

No, I want to read another good Hulk Story. Any suggestions?
Posted by Yankeejetsfan at 11:02 PM