Yet Another Addition To My Luke Skywalker Collection 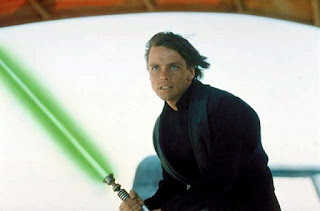 Man, I cannot wait until I have the room to put up shelves. I will have a Luke Skywalker shelf and I already have some nice things to display. In about a years time, I have been able to pick up some cool Skywalker items. From vintage toys to more contemporary toys. Books, a vintage shampoo bottle, even a Valentine's Day cardboard Star Wars heart will be added to the shelf. Today, my newest piece arrived and it's been one I have been wanting for a long time. 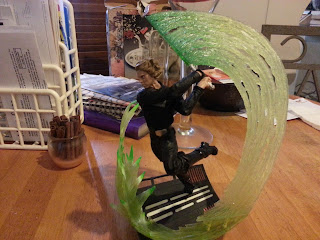 I was finally able to pick up the Unleashed Luke Skywalker Return Of The Jedi figure that I have been eyeballing ever since I had decided to start a Skywalker collection. When I first say this figure in Kay Bee Toys I wasn't collecting Luke or toys in general, thus I never picked it up. Now, thanks to the magic of eBay, I now have this figure in my collection.

Let's take a closer look at this figure: 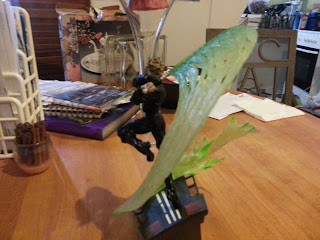 This figure depicts the final lightsaber dual between Luke and Darth Vader on the second Death Star while Emperor Palpatine sat and watched. The figure, I'm guessing, is showing Luke in "rage" mode as he slashed wildly after Vader mentioned turning Leia to the dark side if Luke wouldn't. It's the closest we see Luke losing it and coming close to joining the dark side by losing his cool. 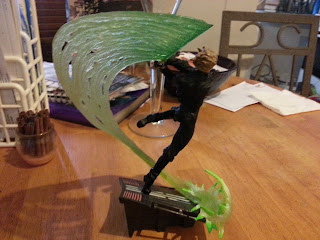 From behind, you can still see how nice this figure is. I love the waves of green that surround this figure, representing the lightsaber being swung wildly, hair whipped back like a bad Willow Smith song. 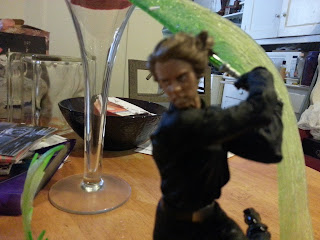 The face sculpt is actually not too bad. It's not a dead on likeness of Mark Hamill, but it's close enough to where you can go say eh, I can see it. Luke looks really pissed off here, It's not like the generic painted on faces that Kenner made on their figures. You can see the rage in Luke's face as as swung his lightsaber (which, BTW, is the coolest lightsaber in the Star Wars Universe. Don't give me Darth Maul's dual bladed saber. I'll take Luke's Jedi saber any day).

When I get my shelf up, I will put this figure up right next to the other Unleashed Luke figure I got off eBay in   March. But I don't plan to stop there. There are still a few Luke pieces that I would like to add to my collection. I have been wanting to add a vintage X-Wing Fighter, vintage Land Speeder, a vintage coloring book I saw on eBay from Return Of The Jedi with Luke on  the cover and some of the vintage Kenner figures I am missing. Some of the more contemporary items I want to buy is a green light saber I have seen in Toys R Us, some of the Gentle Giant statues and some of the larger figures from Gentle Giant, Kenner, Hot Toys and Kotobukiya. Maybe I'll do a Luke Skywalker wish list blog post one day. That way, I can have a visual list of what I want and go and get what I need.

For now though, I am content to just enjoy the stuff I have in my Skywalker collection. One day soon, I will be able to display everything, Anyone who comes to see the collection will know that the Force is strong with this one.
Posted by Yankeejetsfan at 11:32 PM