Good Bye Andy. Thanks For The Memories 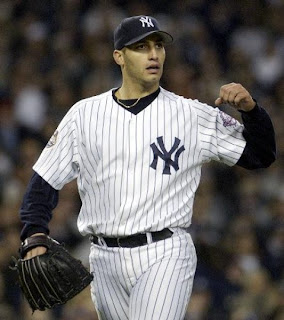 Yesterday, Andy Pettitte officially announced his retirement at a press confrence at Yankee Stadium. Yankees manager Joe Girardi, Yankees GM Brian Cashman and former Yankees CF Bernie Williams were in attendence to Pettitte's farwell address to the media. In his press confrence, Pettitte admitted that he was woring toward coming back for the 2011 season, but after some soul searching, decided he didn't have the hunge to compete and that his wanting to be with his family outweighted his desire to come back for another season.
So after a 15 year career, in which he won 240 games, was a 3 time all star, a 5 time world series winner and the all time winningest post season pitcher, Pettitte hangs up his cleats. I can't say that surprises me. I would have figured if he was coming back, he would have said so after the Yankees failed to land Cliff Lee. Instead, Pettitte never said a word and lingered before finally letting the world know. I don't begrudge a man for wanting to be with his family. Plus, Andy was as much a Yankee as Derek Jeter is in the years Pettitte played here, save for three seasons as a Astro. I can tell you one thing, Pettitte will be missed. After CC and Hughes, the rotation is an uncertainty. AJ Burnett needs to get his head on straight, a few rookies will be vying for the 4th and 5th spots in the rotation along side Freddie Colon, Bartolo Colon and possibly Mark Prior. Not exactly a rotation I would want to take into war against the likes of Boston, Tampa, Detroit, Texas and Minnesota. Baltimore will be improved, Seattle may get better and Oakland is worth keeping an eye on. The Yankees are not guarenteed a playoff spot and will have to make a trade of some sort to improve the rotation to contend.
In honor of Pettitte, I give you two of my favorite Pettitte cards in my Yankees collection: 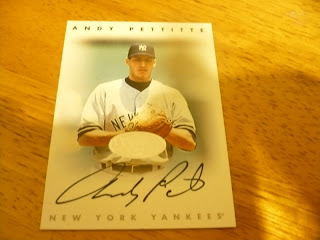 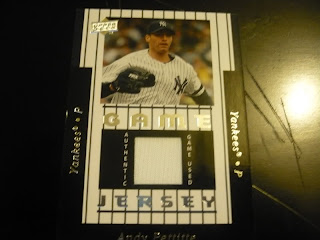 2008 Upper Deck Game Jersey gu jersey card.
Good bye Andy. Your will be missed
Posted by Yankeejetsfan at 12:33 AM