I love these figures. I have a good sized collection of them. I taught I had most until I saw the check list on spawn.com and saw I still needed quite a bit of them. I'm missing the more recent figures and some of the older ones. I hope I can catch up on those during the year.
McFarlane released pics of the upcoming MLB Series 27 and Cooperstown Series 8 and I gotta say, I'm drooling over my keyboard seeing these pics.
Here is a pic of the Derek Jeter from series 27. To me, it's the best Jeter McFarlane has put out What a great looking figure. Captures him in his classic Jeter jump and throw in the hole pose. 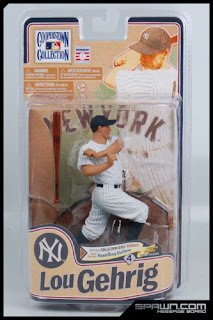 Not as nice as his first figure, but pretty cool nonetheless 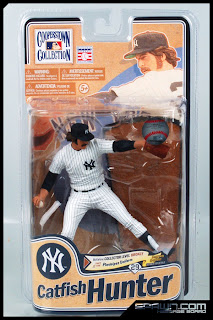 He had a figure of him in a Yankee uni as a variant to the first Catfish fig McFarlane put out. Now, it's an official figure. 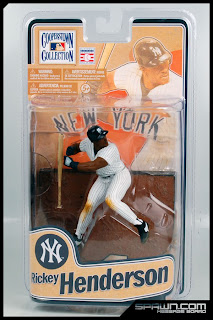 Not too crazy about this one only because they used the wrong pose, in my opinion. I feel they should have gone with him leading off first base or sliding into second. This figure is also being released in an Oakland A's uni. I'm hoping this one is not hard to find.

I cannot wait till they are released. I will be spending some greenbacks on them.

Posted by Yankeejetsfan at 1:50 PM