This weeks assignment form our fearless leader, was to show some green. Really? I smiled and was told that wasn't the type of green they meant. Nor should I attempt to open my wallet because it's well known that there isn't any green in there. Well, they were mistaken. I had a piece of gum left from the other day. HA!

That doesnt mean I don't have any green. 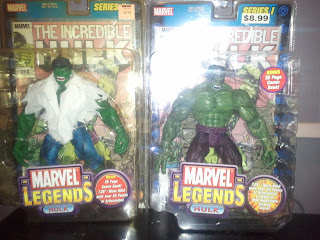 I don't have a lot of Hulks, aside from these two from an early wave of Marvel Legends. Looks like Dr. Banner forgot to get undressed before Hulking up again. That is a cool figure. After seeing Brian's vintage Hulk collection, I think I'm wanting to pick up some more Hulks. 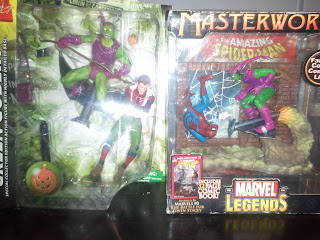 As much as a Spider-Man collector, my Green Goblin collection is pretty much non exsitant I have these two pieces because they are pretty bad ass. The one on the left depicits the cover of  Amazing Spider-Man #38 when The Goblin learns Spider-Man's secret Identity 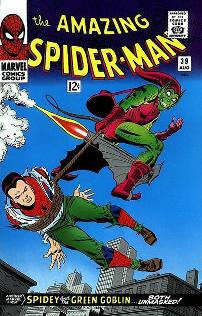 The piece on the right is a Marvel Legends Masterworks of Spidey fighting Gobby. That one was inspired by The Marvels #0, The Battle For Gwen Stacey. I'm currently reading the Marvels. If you have not read it, I urge you to do so for Alex Ross's art work alone. 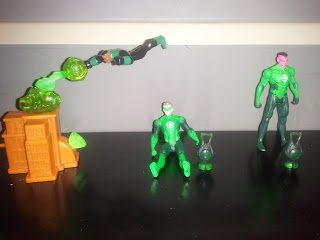 So, Sinestro is standing, John Stewart is hard at work, yet Ryan Reynolds decides to take a siesta? Stand up, Hollywood! You work for me now!

Then I remembered I had an Alan Scott Green Lantern figure and am kicking myself for not including him with my other Lanterns. Oh well, There will be another time, I'm sure. 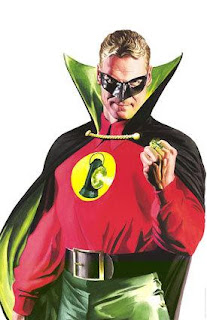 Ok, Ok! No need to shake your ring at me. I'll get you into another blog, I promise. Shesh. You would think mariage would have settled him down

If this is not enough green for you, check out these fellow League members. Maybe Alan Scott will have his day in one of them:

Enjoy!
Posted by Yankeejetsfan at 1:24 AM