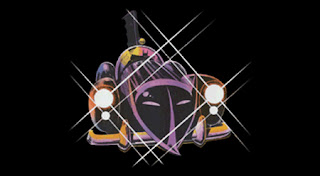 For as long as I can remember, I have loved the Batmobile. I'm not talking hearts and flowers and cherubs dancing along side my head, shooting arrows at me as I run toward it in a meadow with "Love Is A Splendid Thing" singing in my ears. I'm talking heart pounding, eyes wide open and drool dripping off my chin when I see one.

I'm not even a car person. I couldn't tell you what racken pinon steering is or if I even spelled it right. All I know is I love that car.  If its a toy, I want it. It it's featured in a comic, I'm reading it. To me, The Batmobile is the greatest vehicle in pop culture history. Everyone knows what it is and who drives it. It is the most pimped up car in comics history, period.

With everyone excited about Dark Knight Rises opening up Friday (Me included) and posting Batman related blogs left and right, I decided to post one myself spotlighting my five favorites of the many incarnations of the Batmobile.

So, as Casey Kasem, who was the voice of Robin in the Super Friends, used to say, on with the countdown. 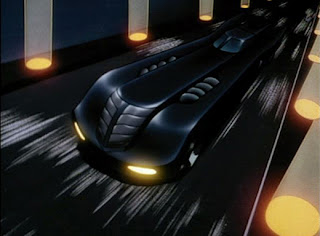 When you first see it in the opening credits, you realize that this is one cool car. Designed by Bruce Timm, this Batmobile was designed combining elements from the comics and the Tim Burton Batman films. It was dark, with a gothic feel to it, like the cartoon. It also was, like the movies, getting back to Batman's roots where he drove larger vehicles. It had a lot of those wonderful toys Batman is known for like an ecjection seat, tear gas launcher, missile rack, among other things. To me, this Batmobile is way cooler than any of the movie ones.

This awesome vehicle first showed up in Detective Comics #156. In the book, Batman had plans for a Batmobile that was 10 years ahead of it's time. The car was modeled after a Studebaker and possibly a Cadillac. As a kid, I read the Batman Encyclopedia and I remember seeing a breakdown of what this particular Batmobile had inside it. It had a complete lab with, yes, stools. Imagine Robin trying to work in the lab while Batman is tearing down the streets of Gotham. Not getting much done, I assure you. The front had a steel nose to cut through barriers and the top had a searchlight, but what I love most about this car is it screams 1950's with the bubble dome and the huge fin on the back. This car is classic cool and one I need to add to my growing fleet of Batmobiles. 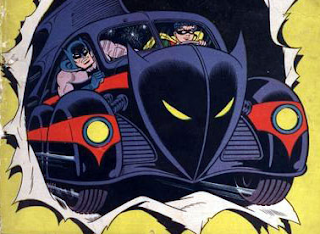 I'm sure when kids picked up Batman #20 and saw this new Batmobile bursting out the cover, they must have thought they seen the greatest thing ever. The bullet holes in the windshield suggests that they were chasing some bad people and that Batgrill up front is just nasty. Dick Sprang drew this iconic image which was based on a previous Batmobile drawn by Jerry Robinson, with some noticable diffrences like headlights and the red trim. There were diffrent versions of this car drawn by Bob Kane, but this car seems to be the definitive Batmobile of that era. 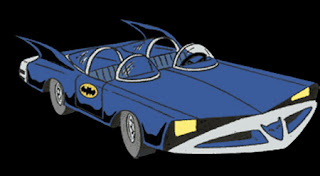 As a kid who grew up watching The Super Friends and it's many incarnations throughout the 70's and early 80's, I love this Batmobile. I have fond memories of siting in my jammies watching Super Friends while polishing off a couple bowls of cereal. This car, which was designed by Alex Toth, was based on the Futura 1966 Batmobile, with some obvious diffrences like the lack of red stripping and the oval Bat symbol on the doors. The front of the car has a Bat head on it's grill that the live action car didnt have either. When the show changed to Challenge Of The Super Friends, they did away with this car for one that was more hard edge, but I like this one a lot better. 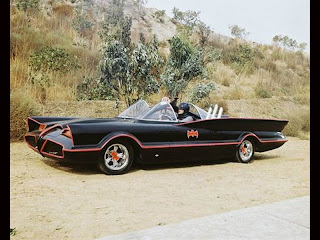 Come on, could there have been any other choice for this spot? This, to me, is THE Batmobile. I was not lucky enough to have seen the show when it aired (on account of my not having been born just yet), I can only imagine how thrilled the kids were back then to have seen this Batmobile coming out of the Batcave, tearing down the streets of Gotham, parking in front of Commisioner Gordon's office, getting stolen by various villians. The car became a character in the TV series. Designed by George Barris in just 3 weeks, he used Ford's abandoned Futura concept for the car. It already had the fins, which he modified and the bubble canopies. According to Barris, he modified the nose of the car to look like a bat mask, as well as open the wheel wells. Some of the cool features the car had was lasers, a telephone, rockets, ejector seats, an alarm system,and a mini batcomputer in the trunk. When I saw a replica of this Batmobile at Super Mega Show, I had to tell you, my heart was ponding and I had to really fight the urge to jump into the drivers seat and haul out of there. One of the things I do regret is not getting George Barris to sign something for me at a Hollywood Car Show he appeared at a few years ago. I hope I can get the opportunity to meet the creator of arguably, the most famous car in pop culture history.

Well, there you have it. My 5 favorite Batmobiles. I'm sure you guys have your own favorites and please, list any you feel I might have missed. I would love to read any and all opinons on the subject.

I'd also like to give props to a site I stumbled upon while doing my research for this particular blog. Head over to http://www.batmobilehistory.com This web site has so much information on the history of all the Batmobiles as well as pictures, fan art and, my favorite, a collectors page. I was in awe of some of the collections I seen and I haven't even seen them all.

As a pop culture geek, I cannot think of a car that is better than the Batmobile. Maybe the Black Beauty or the Deloran from Back To The Future, but thats it. Not The Mystery Machine or KITT. Not The A-Team Van or the truck from BJ And The Bear. None may be privlaged to have the honor of parking itself next to this extraordinary machine. There can be only one and that one is the Batmobile.
Posted by Yankeejetsfan at 11:05 PM