Showin' Off The Swag-Iron Man

After writing this blog for a while, I thought it might be time to start showing off the swag I have accumulated over time. Originally, I wanted to wait until I was able to display everyhing, but unfortunately, life has other ideas. So, for now, all the swag is boxed up, waiting for the day they will get to be displayed in the man cave I have dreamt of.

So, from time to time, I will be showing off pieces of the collection. One day, it might be a super hero, another it might be a sports team. Cards, toys, bobbleheads, all of it will be shown. So today, lets start off with something small. A collections I just started to build. 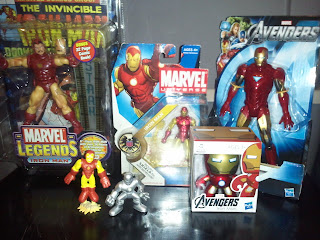 I had the Marvel Legends Iron Man ever since it came out in the first wave. I recently picked up the Marvel Universe Iron Man and the Avengers Iron Man at a toy show, blogged about earlier. The Mini Muggs Avengers Iron Man was a gift and the 2 smaller Iron Men were bought from Brian over at Cool and Collected. Would love to pick up the Wal-Mart Exclusive Iron Man figure as well as a statue or two and a figure of my favorite armor, the Mark III, which had the horned helmet. That's just off the top of my head. Also, not shown here, are 2 Iron Man T-shirts I bought from Old Navy.

I have always liked Iron Man. I remember first noticing Shell Head as a kid, watching the Marvel Superheroes on WPIX-TV. Yes, the animation was crude, there was barely any movement by the characters in this show, but it had some of the catchiest themes and Iron Man's was no exception. You can see for yourself if you don't believe me:

I really need to learn how to attach video on my blogs.

But, to be honest, I really didn't really gain an appreciation for the character until the Iron Man movie. It was just so well made and, aside from Christopher Reeve, no one was born for a superhero role like Robert Downey Jr was. Seriously, I can't imagine anyone else playing Tony Stark but him and that to me is a huge plus when it comes to comic book movies. Seeing the armor on the big screen and what it can do has made me want to learn more about Iron Man. I just finished reading Marvel Essentials: Iron Man Vol. 1 and Avengers Vol 1. I need to grab the next volumes of both as well as the Iron Man Guide Book I saw at Barnes N Noble. I flipped through it and it's a must get for me. Once I seen Iron Man 2 and then The Avengers, I knew he would be a hero I would be collecting.

The collection is small, but it will be growing. I have my eye on some Iron Man goodies I hope to pick up in the upcoming months.  I don't think it will be as large as my Spider-Man or Batman collections, but there will definately be an Iron Man pressence in my display case and I can't wait.
Posted by Yankeejetsfan at 11:26 PM