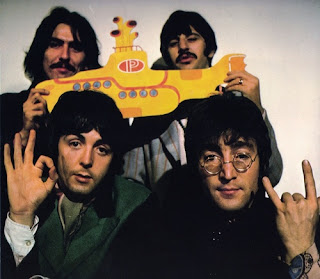 Back in 2000, McFarlane Toys released Series 2 of The Beatles Yellow Submarine figures. Series 1 was one of McFarlane's best selling series so it made sense to release a second series from this beloved Beatles movie. This set features the Beatles in their Sgt. Pepper outfits from the movie. The series again had other characters from the movie released with the Beatles.

Enough chit chat. On with the pics. 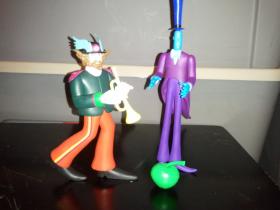 Here's Ringo with an Apple Bonker. What I thought was funny in the film was when The Beatles played Sgt. Pepper's Lonley Hearts Band, when the part where they introduced Billy Sheers, they introduced Paul as Billy Sheer. Everyone knows that Billy Sheers was Ringo on the Album. I wonder if that was intentional or a mistake. 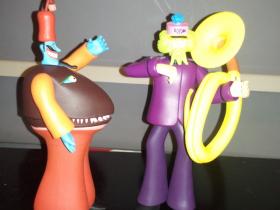 Ok, the flash on this pic is pretty bad. My apologies. Under the glare, is George released with a Snapping Turk. One of my major complaint about this set was with George and John, I couldn't fit the instraments on them, which is why George's is hanging on his arm. I might have to lie the instraments at the figure's feet or figure out how to get it on them. 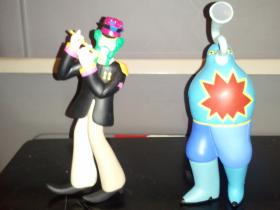 Here's Paul with the Sucking Monster. I think I dated a few of these. 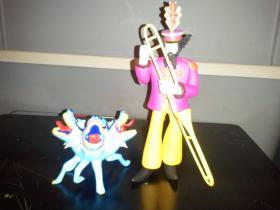 Finally, here's John with The Bulldog. One of my favorite songs in the movie is "Hey Bulldog". The original version didn't have the song in the movie. It's a great song and I cannot understand to this day why it wasn't included in the original version. It has been since been put into the movie in the restored versions. If you don't know the song or haven't seen the bit in the movie, your in luck:


Instrament issues aside, McFarlane did a terrific job with these figures. Like the first set, Series 2 has some amazing sculpts. The figures look like they lept from the screen and onto your shelf. The articulation on these figures are slim and none, but who cares? These babies look great on a shelf and would make great additions to any Beatles collection.
Posted by Yankeejetsfan at 10:13 PM