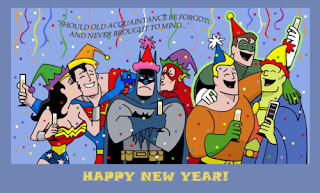 Even though Batman isn't too happy, I would like to take this time to wish everyone a happy and safe New Years and a great 2013. 2012 was a great year, collecting-wise. I rediscovered a passion for toys, comics and other pop culture awesomeness I thought was lost. Now, 2013 comes (take that Mayans) and I have plans for my collection. Everyone has New Years resolutions so here are mine, collecting-wise. 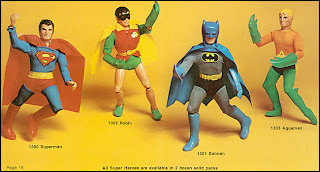 One thing I discovered this year was a passion for vintage toys. Let me be specific here, vintage superhero toys. The newer stuff that has been coming out hasn't thrilled me as much as the vintage stuff.

I have always been a huge fan of Mego's World's Greatest Superhero line. I had some of the figures as a kid. A few years ago I was picking up the figures lose and now I want to finish the line as well as pick up a few of the accessories.

I also want to pick up more vintage Batman stuff for my Batman collection. As a kid, I loved Batman and always had a Batman figure or a Batmobile. With the Dark Knight movies and my rewatching the 1960's Batman show, my love of the character is at an all time high and I want to add more vintage Batman to my collection.

As much as a Superhero fan as I am, specifically Batman and Spider-Man, there are other characters I would love to collect. Green Hornet, Luke Skywalker and James Bond are three that come to mind. I have seen some great pieces I would love to add to my collection. I would also love to add some vintage Superman, Hulk and Iron Man pieces too.

I would also love to pick up some vintage Star Wars toys like a Death Star Playset, X-Wing Fighter and some figures.

One of the things I really want to do is to be able to display all the stuff I have managed to collect. I want to buy display cases from Ikea and put up some shelves. I have seen other collectors awesome collections and I would love to be able to do the same.

-Work On My Spider-Man and Batman Comics Collection
Over the past couple of years I started to collect Spider-Man and Batman comics. I would love to have an entire runs of Amazing Spider-Man, Batman and Peter Parker: The Spectacular Spider-Man. Now, Some of these books are way too expensive and I will probably never complete the sets, but I will have fun trying to grab as many of these vintage comics as I can.

I would also love to add some vintage comics to my collection. I just love the artwork from the 1960's and 70's. I could just read those stories for hours on end.


I hope everyone has a fantastic New Year. Please, don't drink and drive. Be safe and I will see you all in 2013.
Posted by Yankeejetsfan at 9:36 PM