Star Trek Has Always Been There 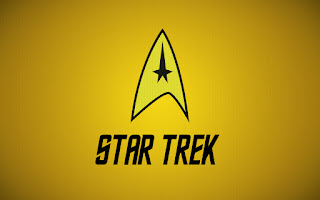 Let me start off by saying this: I am not a Trekkie. Not by a long shot. I couldn't tell you why Kirk joined Star fleet or even if that's the name of the academy or whatever it is. But, for some reason or another, Star Trek has been a part of my life for one reason or another. Be it something I had seen or a toy or whatever, James T. Kirk and company have not been too far behind ever since my geek roots were laid. 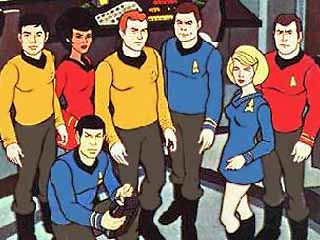 Believe it or not, the 1960's series was not my first exposure to Star Trek, it was the animated series that first introduced me to the world of Spock, Kirk, Scotty, McCoy and the rest of the crew of the Starship Enterprise. From 1973 to 1974, Filmation produced a series simply called Star Trek. It's now called Star Trek: The Animated Series to differentiate between this show and the live action show. It was a Saturday morning show that aired on NBC and featured the voices of William Shatner, Leonard Nimoy, DeForest Kelly, James Doohan, George Takei and Nichelle Nichols. Walter Koenig was the only actor who didn't return because the show's budget could not afford the complete cast, which really doesn't make sense to me. I'm sure Koenig was not commanding top dollar to lend his vocal talents to the show, although he did later write an episode of the show.

I know I saw this show during it's first run because I cannot find any instances where this was rebroadcast on later on syndication until the 1980's when it aired on Nickelodeon and on Sci Fi Channel in the 1990's. I was only 3 years old when the show finished it's second run, but I remember vividly sitting on the floor in my grandmothers home, watching the show. How many episodes I watched I could not say. May have been only one or maybe the whole run. All I knew was something about this show interested me enough to warrant my attention when I could have been playing with my Megos instead. Once the series ended, I am assuming, I had nothing to do with Star Trek for the next few years. 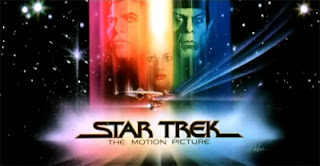 The next time Star Trek entered my life in December of 1979 when my mom took me to see Star Trek: The Motion Picture. By now, I was 8 years old, but I still did not know who these characters were. I didn't realize that these were the same characters I had watched on T.V., animated, only 5 years prior. Having seen Star Wars the year before, I thought since this was set in outer space too, it had to be just as good, right? Well, let me be completely honest with you guys, I have not seen this movie since I saw it in the theaters back in 1979. I am guessing the movie didn't leave a great impression, so I never really bothered to see it again. Not when it was shown on T.V. nor have I purchased a copy of this movie on DVD or Blu-Ray. But I do remember wearing a blue Star Trek shirt with the sewn on and begging my mom for some of the toys from the movie.

I didn't have much, but I do remember having these two figures: 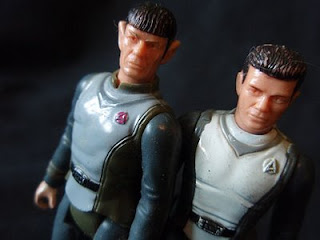 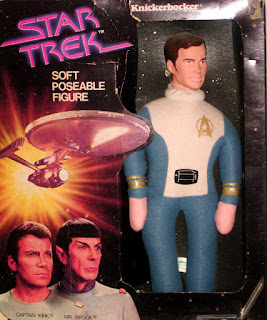 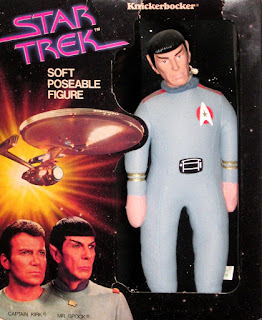 I remember having both these plush figures from Knickerbocker. These were my favorites from the Star Trek stuff I had and Lord, I wish I still had them. I had some emotional attachments to these for some reason. I used to always carry these around with me until the school bully knocked me down and ran off with them. My mom's response was "I shouldn't have taken them to school". A bit harsh, but I now know she was teaching me a lesson about taking care of my cherished toys. 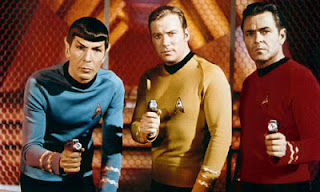 I finally got around to watching a couple of episodes of the original series. The show was always shown here in NYC on WPIX-TV at various times, so I could always catch it whenever I wanted, which was not a lot. I don't know if it was because I wasn't impressed or I had other things to watch. I can honestly tell you I did not nor have I watched very many episodes to this day of the OG show. 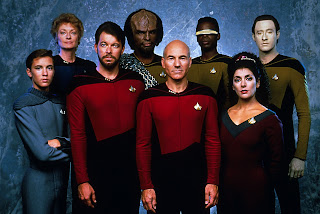 In 1987, Gene Roddenberry gave us a Star Trek show I actually tried to watch on numerous occasions, but ultimately gave up on. I could never get behind Capt. Jean-Luc Picard, Data, Warf, Riker and Wesley. I saw certain shows like when Spock returned and such, but I can't really say I was a fan of the series.

A few years later, I met my best friend, George. He was (and still is) the Ultimate Trekkie. He is a huge fan of the original show and could do a great impression of William Shatner. Because of George, Star Trek was a huge part of my life and I would go see the movies with him, or in the case of Star Trek V, make fun of him (I call Star Trek 6 The Apology).

I have to say, I hated the Next Generation movies. I found them boring and not well written. When I saw Generations, I snickered at the fact that William Shatner's stunt double looked like Huey Lewis. I walked out at the end of Nemesis and vowed I would never see another movie again. By this time, I had had it with space, the final frontier. I had liked Deep Space Nine, but not enough to keep up with the series and I never seen Voyager or Enterprise. From what I heard, I'm better for not seeing either. 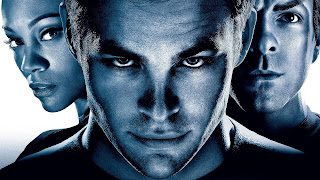 A funny thing happened in 2009. I saw a trailer for the new Star Trek reboot movie and instantly became interested in seeing the movie. I'm not sure if it has to do with the casting of Chris Pine and Zachary Quinto, who look like young versions of William Shatner and Leonard Nimoy or because it was an origin story, one that I never got to see. When it came out I went to see it and was instantly blown away by the movie. J.J. Abrams directed the hell out of this movie and it showed. Not only did I think Pine and Quinto do a great job in the movie, but I also enjoyed John Cho's Sulu, Simon Pegg's Scotty, Karl Urban's McCoy and Zoe Saldana's Uhura. Casting Eric Bana as a Romulan named Nero was the icing on the geeky cake and I instantly became a fan of this film series.

I just saw Star Trek: Into Darkness today and loved it. All the elements that made the first movie fun was there in this movie and again, the casting of the villain was perfect. I won't say too much more as I don't wish to ruin it for anyone who hasn't seen it yet. All I have to say is, if you enjoyed the first, you will love this one. I will see it in the theaters again soon.

After seeing Into Darkness, I now have an interest in going back and watching some of the stuff I may have taken for granted. I'm older now. Maybe I will dig the stuff that I didn't when I was younger. I have always had a soft spot for William Shatner (his version of "Rocket Man" is awesome) and, truth be told, I have been wanting to re watch Star Trek: The Motion Picture. Now, I may pick up the Blue-Ray and spend a day watching it. I also have The Animated Series on my Netflix que.

It seems to me that over the years, no matter how hard I tried to shake it loose, Star Trek has stayed a part of my life for almost 30 years. I guess it's time to embrace this classic piece of American pop culture geekness and enjoy the voyages of the Starship Enterprise and boldly go where just about every other geek before me has gone before.
Posted by Yankeejetsfan at 11:25 PM