Is Carmelo on his way?? 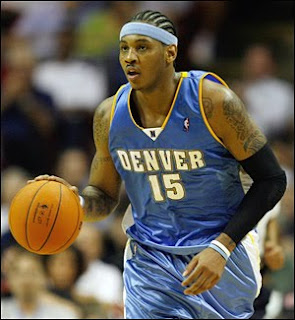 ESPN is reporting that Carmelo Anthony will not sign any extension with the Nuggets unless he is traded to the Knicks. Now, don't get me wrong. I'd love to see 'Melo sporting the orange and blue while calling the Garden his home, but a couple of things bother me.

First of all, it's going to take a lot to get him here. I have heard a couple of things regarding what it would take to make the trade. First of all, Denver wants a number one pick, which the Knicks do not have right now. It went to the Rockets in the Tracy McGrady deal, one that Knick President Donnie Walsh regrets making to this day. From what I read, the Knicks are trying to get that pick back from Houston and are willing to deal Anthony Randolph for it, which I honestly do not mind at all. Randolph has done nothing since he's been here and is just another body in the Mike D'Antoni dog house. Ask Nate Robinson what it would take to get out of it. I'm sure he would tell you leaving town is the only option. So, I would make this deal in a heartbeat, if Houston wants him.

If, and only if, the Knicks manage to pull off the trade, I'm sure they will be asking for either two of these three players; Danillo Gallinari, Wilson Chandler, or Landry Fields. Maybe all three. Now, Yes, the Knicks have been just God awful for the past 10 years and yes, Carmello Anthony is one of the top 5 players in the NBA. So, why is it I have a hard time wanting to make this trade? It maybe that the Knicks are doing pretty well as is. Granted, they have played against the bottom teams of the NBA, but their win over Denver surely had to show even the harshest of critics something. Plus, all three players have shown growth so far, especially Chandler, and to give up even two of these pieces, would hurt the depth of this team.

Maybe trading for Mello would make the Knicks more appealing to Chris Paul when he becomes a free agent in 2012, but what would the Knicks look like then anyway? To me, I say, if Carmello Anthony wants to be a Knick that bad, he should just stick it out in Denver another year and become a Knick in 2011 when all it will cost them is money. But, then again, what do I know? I'm just a fan.
Posted by Yankeejetsfan at 1:48 PM