What I Did During The Blizzard 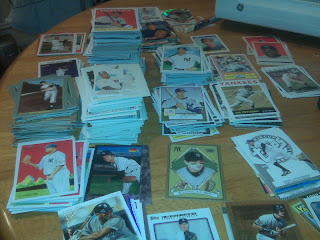 As New York City got hit with a snowstorm the like we haven't seen here in quite sometime, and since my Jets got me PO'ed, I decided to do something to take my mind off it all. I worked on organizing my cards.

It's a goal I have for the New Year. Get all my Yankees cards organized by putting them into their binders. Right now, I have boxes of cards I recieved through trades, purchases or from my team collectors group that I open and put into boxes since I'm a lazy mutt. I have been doing this for months now and I looked at the boxes piling higher and higher and realized I needed to get them put away. And it's not just Yankee cards either. I have Jets, Knicks, Devils and Islanders cards I need to organize too. Since the Yankees cards take up about 75% of my card collection, I decided I would tackle it first.

I decided to go by brand and Topps would be the first one I start with. I had actually started the project about a week and a half ago. I first hit just the Topps base series. I have some cards that go back to the 50's and 60's. Not many, just a couple. Once I organized all of them and put them away, I tackled the Topps subsets. Allan & Ginter, Heritage, Stadium Club, TEK, Stars, 205, 206, etc. All those sets needed to be put away. I started right after the Jets lost their game to the Bears, yet backed up into the playoffs (thank you Washington Redskins), which was around 4:15 EST. I didn't call it a night untill 11:30pm and I still haven't finished. I threw all the doubles and triples into boxes to be sent to my tier 2 Yankees collector and for trades. And there was a lot too. Plus, with A&G and Heritage, I had to make sure I wasn't putting the paralls into the boxes as doubles. Anyone who collects A&G, how do you store your mini's? I just put them into 9 pocket pages along side the regular sized cards.

As much as it is as task to put away all the cards, it is also so much fun to me. I just sit and look over the cards and just soak in the designs, the feel of cardboard (or chrome) in my hands and it just takes me back to when I was a kid, organizing my cards and watching the Yankees game. I can still hear Frank Messer, Phil Rizzuto and Bill White call the game as I look over my cards. As much as I'm into other things like comics and Batman/Spiderman collecting and McFarlanes and bobbleheads, nothing brings me as much joy as when I complete a team set or get a Yankee autographed card I need for the collection. Things may come and go in life, but the one constant I have is my card collecting hobby. Always brings a smile to my face.

Posted by Yankeejetsfan at 10:16 AM