Well, I didn't See This One Coming... 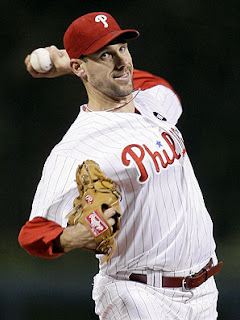 I'm still kinda stunned by this. When I received a tweet on twitter informing all that Cliff Lee had indeed spurned the Yankees, the years and mucho dinero to resign with the Phillies, I was wondering how this happened. I, like all of you, had heard there was a "mystery team" that was lurking. I had also heard that this (Dr. Evil hand gestures quotaions) "mystery team" was far behind the pack and that it would ultimately come down to New York and Texas for his services. I honestly felt that he would sign with the Yankees, even though the contract they were offering was crazy.

Little did I know that he would take his talents to the City of Brotherly Love.

Honestly, the longer this took, the less confident I felt Lee was coming to NY, especially after that whole spitting incident with his wife by a couple of drunken yahoos. Normally, if a player wants to be here, it's usually done at the winter meetings. But when Lee took his time in answering and then entertaining the Rangers for a third visit, I felt that's where he was staying.

Then again, who knew he had called the Phillies himself and asked what it would take to get back there. Who knew how long had this been going on and just been kept secret? Ultimaely, he took less money and less years to go back to Philly, where he helped lead them to the World Series in 2009. I will say this much, that's quite a starting four they are going to have in Philidelphia. Halladay, Lee, Hammels and Oswalt is as imposing as any rotaion in recent memory. Maybe as imposing as the one the Yankees had with Clemens, Pettitte, Mussina and Hernandez. Obviously, this makes the Phillies one of the favorites, if not THE favorite, to win the World Series. But then again, that's why they play the game, right?

What now for the Yankees? First off, I seriously doubt that Zack Grenke is coming to the Bronx as anything other than a visiting player. The Yankees are on his list of teams he wouldn't accept a trade to. Secondly, his well documented history with social anxiety disorder & depression would not help him in the demanding city that is New York City. what happens when he allows 5 runs in 3 and 1/3rd to Boston? The papers, and most fans, would be all over him. I don't really believe this is the place for him to thrive. And even if he does decide to come, what of Andy Pettitte? He still hasn't said if he is retiring and he is taking an awful long time (there is that time thing again!) to inform the Yankees if he will be at Spring Training or home in Deer Park, TX. The Yankees, as of now, have 2 spots to fill before Feburary. The signing of Russell Martin today pretty much tells me that Jesus Monetro is now trade bait for a pitcher. Martin will be a one year catcher until Austin Romine is ready. Now begs the question of who do the Yankees go after with Montero as the tasty morsel being dangled. Josh Johnson? Clay Kershaw? The Yankees are going to have to get creative and fast, otherwise those dreaded Crimson Sox of Boston will beat them as if they owed them money. With that lineup, it may not be pretty.

Here is where Brian Cashman earns his money. The two players he targeted, Cliff Lee and Carl Crawford, both signed elsewhere. Andy Pettitte may not be back. What do you do Brian, What do you do? If I get a tweet that the Yankees sign Carl Pavano to a three year deal, the sounds of pain you will hear from New York, will be from me, screaming and pulling my hair out. Please Brian, I don't want to be bald.
Posted by Yankeejetsfan at 1:58 PM